With a new installment scheduled for a 2015 release, it looks like The Avengers movies are here to stay. This isn’t necessarily a bad thing as long as we still get the individual films of superheroes like Thor, Iron Man and Captain America. It’s important for audiences to be able to focus on and appreciate true character development instead of the fast paced action that gets packed into these films when they’re thrown all together. Oh, the action is important, but the change is good to.

As we await this weekend’s highly anticipated release of Captain America: The Winter Soldier, I take a moment to look at another avenue of media to wet our pallets for the Marvel-ous universe. 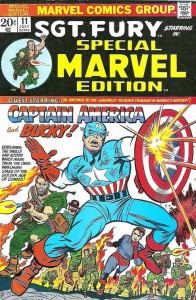 The Captain America Comics #1 issue went on sale in December of 1940. Most fans of the Captain are well schooled in the origins and background of the superhero. My own experience came from some of the early Avengers comics, so I missed out on a lot of the original works. This is partly because one of my first interests in comics began at a young age with the DC issues of Sgt. Rock. Of course, this eventually leads to the discovery of the Marvel war hero SGT Fury and his Howling Commandos. Yes, the action was important here too. Surprisingly, it was quite a while after this when I finally learned of the extraordinary character’s involvement with S.H.I.E.L.D.

Just as blindly as some of the characters in the series, I too didn’t know about some of the secret identities hidden in the pages. That realization came in the manner of volume 1 #13, SGT. Fury and his Howling Commandos starring Captain America and Bucky. Written and drawn by Stan Lee and Jack Kirby, the copy I have is a Marvel Special Edition printed in 1973, but the original was first published in December 1964. Regardless of the edition, it’s still a cherished part of my personal collection.

Guest Starring: (In answer to the greatest reader demand in Marvel history!)

“Displaying the thrills and action which made them the overwhelming stars of the golden age of comic!”

We quickly find our hero (Sgt. Nick Fury) in a pub called the “Pig and Whistle” having a drink with his female companion (Lady Pamela Hawley) when nearby, bully sergeant Bull McGiveney starts giving a quiet private a hard time. It doesn’t take long for Sgt. Fury and his men to find themselves in a brutal fight defending the docile soldier.

Later, thinking he is about to be reprimanded, Fury and his men are surprisingly given a top secret mission by request of the one and only Captain America. Dropped somewhere over Europe, they find a slave labor camp is being used to dig a “secret invasion tunnel to Britain” (Operation Einfall). One by one, the members of Fury’s team are taken out of action in battle until he is left alone to fight the army alongside Captain America and his sidekick Bucky. They prove themselves strong individually, but become unbeatable as a team. Together, they thwart the enemy’s efforts, but not without suffering injuries themselves. 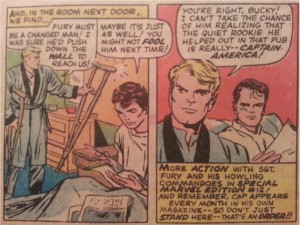 At the “end” of the issue (cuz I really dislike issues that rely on cliffhangers and “continue” next month), Sgt Fury is in the hospital recovering from injuries when he discovers that each of his men miraculously survived and were rescued also. In the next room, the reader discovers the same private who Sgt Fury defended earlier in the pub. Wearing a robe and standing next to Bucky’s bedside with crutches, Steve Rogers talks to his friend about the need to keep their identity a secret.

2 – Bucky doesn’t play a significant role in this issue, but he still earns recognition in the main billing. It does make for interesting comparison/conversation when we consider the “The Winter Soldier” is about to hit the theaters.

3 – The image of Captain America in the hospital recovering from injuries makes him seem more vulnerable than I thought he was. It makes you wonder how often our heroes end up in traction between bouts with villains.

So the Nick Fury we all know and love today may be the driving force behind S.H.I.E.L.D., but Captain America might have been the true inspiration for the gruff old sergeant. They’ve come full circle over the years, but from an early reader of the army comics, so have I.

There’s nothing quite like having Walter Cronkite narrate live on national TV how well you did your job on Apollo, especially on the day that Neil Armstrong was coming back from the Moon.

The top ten villains to grace the screen.