A Villainous Affair is a serial story in novel form with several point-of-view characters and is a sensational steampunk romance saga about villains and heroes, rich and poor, science and justice, and the breathtaking power of love. 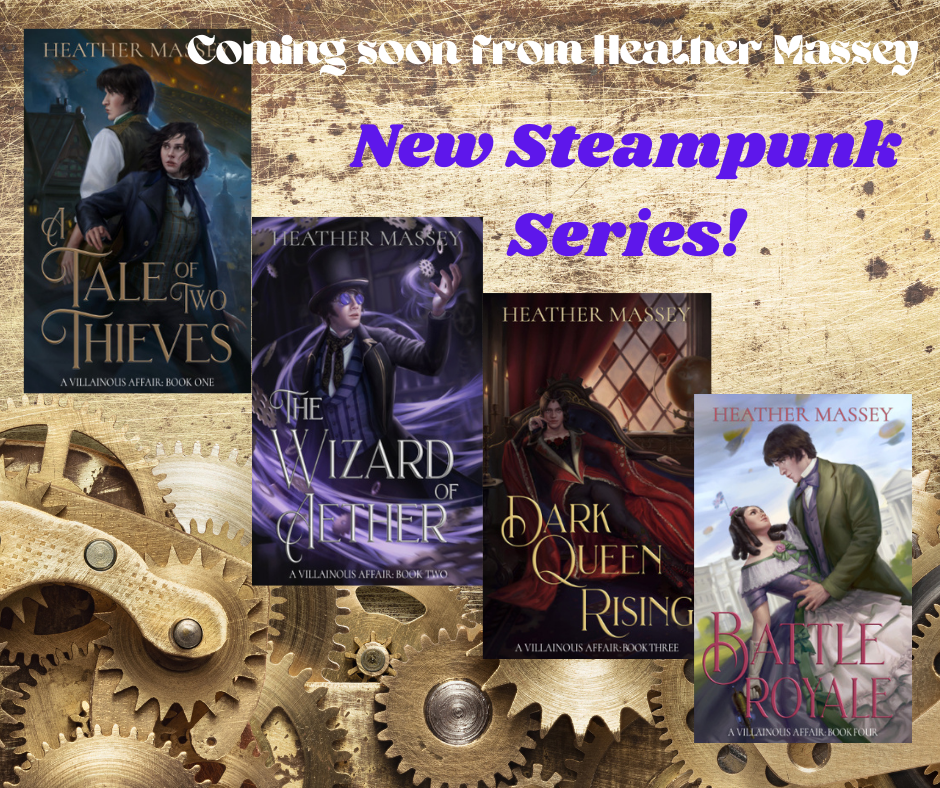 Heather Massey is a longtime resident of the science fiction romance universe, both as an author and a respected blogger (The Galaxy Express) so it’s a pleasure to welcome her back with a new, four book steampunk series, A Villainous Affair.

Here’s the blurb for the first book, A Tale of Two Thieves:

Welcome to the world of A Villainous Affair, a sensational steampunk romance saga about villains and heroes, rich and poor, science and justice, and the breathtaking power of love.

The tale begins with an unlikely pair of thieves who cross paths on one fateful day in a poverty-stricken metropolis….

Once upon a time in Victorian London, lowborn thief Ruby Darling rescues Nathan Harlow, a gentleman fugitive inventor on the run from his murderous uncle. Nathan must prevent his groundbreaking aether device from falling into the wrong hands, while Ruby craves wide-scale social reform to help the country’s destitute people. To ensure mutual success, they strike a deal—her protection in exchange for his technical wizardry to achieve her goal of conquering England.

But Ruby has one condition—their partnership will end as soon as they overthrow the Crown. With millions of lives at stake, she can’t let friendship or romance derail her mission. Nathan agrees even though he’s already hopelessly in love with her. A new identity will help shield him from the authorities, so he proposes a fake marriage. Impressed by his sensible idea, she agrees.

Ruby is dirt poor, so first they need to amass a fortune and build a criminal empire. Meanwhile, the League of Vigilance—a citizen anti-crime force led by the intrepid, poleaxe-wielding Eleanor Marson—is on the hunt to capture Nathan and return him to his uncle’s evil clutches.

The stage is set for a thrilling adventure as Ruby and Nathan Darling embark on a fantastical journey to gain unrivaled power in the underworld and beyond. Yet navigating their unconventional relationship proves just as challenging as their wildly ambitious mission, with many treacherous waters ahead of them.

A Villainous Affair is a serial story in novel form with several point-of-view characters and best read in order. Books 1-3 end with a cliffhanger. Happily Ever After guaranteed.

Veronica Scott for Amazing Stories Magazine: What was the ‘spark’ or original inspiration for the series?

HM: One of my favorite female villain movie characters had been fridged* by a team of male creators to serve the journey of a male character—and that really pissed me off. Also, despite the fact that villains tend to be wildly popular characters, there’s still a scarcity of female villain protagonists in various entertainment mediums.

Therefore, I decided that my next sci-fi romance would help balance the gender disparity by centering a female villain as well as give her a happy ending. Let’s call it my subversive way of stickin’ it to the (villain) man. *maniacal laugh*

That said, a two-dimensional villain who only seeks world domination is so yesterday. Therefore, my complicated lady villain has both social justice goals and a compelling character arc.

Ruby Darling takes morally questionable and sometimes extreme actions to complete her mission, which includes a Robin Hood-inspired redistribution of wealth in Victorian England and decolonization. She’s a villain one can root for while also being an example of the danger posed by white privilege and white feminism.

As for the romance, I chose a slow-burn, friends-to-lovers approach because a healthy villain romance offers more innovative content than the stale, dysfunctional ones we usually encounter in pop culture. Just because Ruby and Nathan are criminals doesn’t mean they have to be in a toxic relationship. There’s plenty of interpersonal conflict, but their romance is based on solidarity and trust.

(*hat tip to Gail Simone, who coined the term)

HM: I love them all equally, but one character surprised me the most regarding how much fun I had writing her: Margaret Harlow, Nathan’s mother. Her shrewd insights, compassion, and sly wit make her a force to be reckoned with.

But Margaret is a woman in a patriarchal society, so she can only express her power indirectly. For example, her parental influence on Nathan has far-reaching consequences for the story. Grab your popcorn because you’ll have a blast deciphering the power dynamics of the Harlow family!

ASM.: What is your favorite ‘invention’ in the series and why?

HM: Old/antique Victorian dolls both fascinate and spook me, so I channeled that interest into A Villainous Affair by creating Evaline, the life-sized pleasure automaton. This luscious mechanical companion brings Ruby and Nathan together in ways you won’t believe until you read it! Here’s an excerpt from when they first discover Evaline in an underground den of thieves:

Two levels down, Ruby guided him through another tunnel. Along the way, they passed Archibald Xavier’s Clockwork Bazaar, a shop that featured automatons for sale. Nathan’s footsteps slowed upon spotting the life-sized replica of a woman in the display window. He stepped closer to obtain a better look.

The automaton’s design was quite sophisticated. Her brown hair had been styled into a fashionable coiffure, with ringlets framing her ivory face. She had brown eyes and red, parted lips. The neckline of her rich jade gown dipped scandalously low, revealing bare shoulders and a tantalizing amount of cleavage. He marveled at how her creator had crafted her breasts in such a realistic manner. They must be a sculptor, or at least enlisted the help of one.

The automaton held the hem of her skirts in her left hand, causing part of her shapely, pink-stockinged leg to peek out. Unexpectedly, her hand moved, lifting the hem higher and higher until her entire leg was bared. Lacy garters held up her stockings—and she was not wearing drawers.

HM: Evaline isn’t the only Victorian-doll inspired technology you’ll encounter in AVA, but she certainly is the sexiest one.

ASM.: What would you say are the main themes you chose to address in the series?

HM: A Villainous Affair delivers high-octane entertainment—along with some truly bonkers set pieces and characters—while also engaging with current social issues. One of the main themes is resistance because disadvantaged characters in an oppressive, terrible world face off against political tyrants amid overwhelming systemic obstacles. AVA doesn’t romanticize Victorian England and the aristocracy—in fact, it does the opposite by exposing the era’s seedy underbelly.

This story also explores society’s framing of marginalized groups as evil/criminal/worthless. Often, society villainizes women—all kinds of women—just for being women, and usually for the purpose of controlling them. Thus, the tale’s central question asks: is Ruby Darling really a villain, or has the dominant group framed her as one because she has ambition, agency, and advocates for social justice?

Finally, A Villainous Affair interrogates whiteness. Ruby and Nathan are pretty darn progressive, but they can’t escape the fact that they’re white people who were born into a society rife with systemic racism. Therefore, the story examines their white privilege and how it impacts their mission.

ASM: What do you feel is the attraction of steampunk for readers?

HM: The aesthetic alone is a huge draw. It’s just so beautiful, fantastical, and stylish. Steampunk worlds can be sophisticated and shiny or dark and gritty—or have elements of both. Book covers in this genre deliver cool visuals, like goggles (Cherie Priest’s Boneshaker), clothing (Beth Ciotta’s Her Sky Cowboy), gears (Zoe Archer’s Skies of Steel), and even steampunk submarines (Lyn Brittan’s The Clocks of London).

Elizabeth Peiró, who did the amazing cover illustrations for A Villainous Affair, incorporated airships, a gear motif, and a dazzling aether pistol into the images. She also designed the characters’ stunning outfits. With steampunk, readers are treated to a variety of steam-powered tech and striking Victorian fashion.

Beyond the aesthetic, steampunk is a genre that grapples with changing technology and its impact on society. The most compelling steampunk stories engage with the theme of who gets access to powerful steam (or clockwork, or aether) technology and why.

ASM.: Do you have favorite steampunk authors/books you’d like to mention?

HM: During my adventures of reading a fair number of trad and self-published steampunk and steampunk romance books, a few stories stood out for me.

The Black God’s Drums by P. Djèlí Clark is a pure marvel! The protagonist is a street urchin by the name of Creeper who teams up with a badass lesbian airship captain to recover a dangerous weapon that threatens an alternate history New Orleans. Expect lush description, a breathtakingly diverse world, and a rich cultural experience.

Gill McKnight’s The Tea Machine: Oh my word, this is a truly quirky and fun time traveling adventure story starring a spinster main character who’s paired with a futuristic centurion love interest. It’s the type of steampunk romance couple I never knew I always wanted. And you can’t beat the space squid!

The Invention of E.J. Whitaker comic by Shawnee Gibbs and Shawnelle Gibbs is about African American Ada Turner, who aspires to become an inventor. There’s only one issue so far, but the diverse story had a fresh perspective on the steampunk genre that left me hungry for more.

HM: First, I’d invite curious readers to read the first chapter of A Tale of Two Thieves, which kicks off the series with a bang! More information, including a primer for A Villainous Affair, are available at my website as well.

As for what’s next, I’m cooking up my next sci-fi romance book idea. In the meantime, I’ll be tweeting a wee bit as well as blogging about various SFR/entertainment topics at my website: The Observation Deck.

Get cracking! There’s some fine SFR to be had in the new year.

An Interview with José Manuel González, author of “Terápolis”