“Winter is coming!” This might be the motto for House Stark in George R.R. Martin’s A Song of Ice and Fire series, but it is also the annual declaration of many people this time of year. As the first dusting of white fluffy stuff glitters our lawn in the morning sunlight, the coldness of reality chills the bones. Hey, ‘tis the season! But as a fan of science fiction, sometimes that which is not reality is what keeps us most warm throughout the harshness of winter. 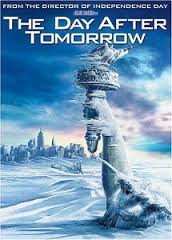 The first cold blast of science fiction to come to mind is the movie The Day After Tomorrow. This isn’t exactly one of the most classic of genre films ever made, but it seems to be the go-to movie in our house lately whenever nothing else is on. And right now, it fits the weather. Maybe it’s just a Michigan thing. When the temperature drops to single digits and I prepare the snow blade on the 4-wheel drive, I can’t help but look over at the flag pole and make sure Old Glory is still swaying in the gusts of wind. Silly, I know, but just once I expect it to freeze in place. Sometimes, that instant freeze seems more real when you’re out in the cold.

A personal preference for the classic winter science fiction would be The Thing. I’m talking about the original 1951 film also known as The Thing from Another World (because I just remember it as “The Thing” when I was growing up). The alien monster played by James Arness stumbling around like Frankenstein as the men tried to electrocute him kept me awake for many of nights.

Then there is that touching family moment when your kids go outside to play. There isn’t enough snow on the ground to make forts yet, but I remember last year hearing a winded, “And I thought they smelled bad…on…the outside.” Yes, there was even a dramatic Han Solo pause of breath from The Empire Strikes Back. Now the snow fort didn’t smell like a Tauntaun (hey, as a parent, I “had to” try it out), but it wasn’t the first time our yard became Hoth and it won’t be the last.

There are a lot of memorable cold winter scenes in science fiction. James Kirk is chased by a giant monster and runs into an ancient Spock after being stranded on a frozen desolate planet is the 2009 film Star Trek. Not as isolated but just as gloomy would be Gotham City, which looks even nastier in the dead of winter. And looking ahead, we are soon to have Captain America: The Winter Soldier, and it is bound to be a winter classic.What are your favorite frozen moments in science fiction film and literature? Feel free to add to the list in the comments below.

George R.R. Martin might have reminded us that “winter is coming,” but we already knew that. Ironically, we can always turn to other works of frozen fiction to keep us warm. After all…‘tis the season!