In this week’s viewing: Higurashi spams the system, Akudama Drive invokes a handy mob, and more!

Editor’s Note: Anime Roundup usually runs on Thursdays; for some reason the scheduler failed to publish it to the site on both Thursday and Friday and Saturday. We’re trying again, today. 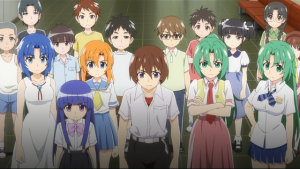 Higurashi: When They Cry #11 – After appealing to the authorities themselves and getting nowhere, Satoko’s friends begin to despair. But Rika lets Keiichi know that he hasn’t irrevocably screwed things up yet, and Shion’s appearance at the school goads him into action. Not the sort of action he half-remembers, but a new choice: spamming the system in an analog, 1983, small-town kind of way.

Does Keiichi still think attacking Teppei was a dream, or does he know on some level that it really happened at some point in another trip through the time loop? Either way, he also seems to recall that it didn’t really solve the problem. He also seems to recall what Mion said to him a few episodes ago (but, for all we know, actually covered at some point in this timeline too) about the villagers banding together if one of them is threatened.

Mion contributes another interesting fact along the way about the fate of Satoko’s brother. Apparently he told her specifically to take care of Satoko. This must have been when he knew he was about to take an irrevocable action. The question is, was it before he attacked Aunt Kanae, expecting to disappear after that, or was it afterward, with Mion coming to him in her role as the head of the Sonozakis, doing cleanup disguised as the curse?

For once, things are starting to look up as the end of the loop approaches. By the third episode of the last two arcs, Keiichi was starting to descend into all-out paranoia. This time, he might actually save Satoko. Unless something horrible an unexpected pops up, which frankly is what I’m betting on. If things worked out this time through, there’d be nothing to do in the second half of the show. 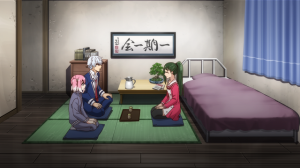 Talentless Nana #11 – Nana is innocent for once, so she can truly act as Kyōya’s assistant in the case of Ishī Ryūji. But Nana has a dozen other things on her mind, like hiding the evidence of her last crime, figuring out what’s going on with her best friend, and convincing herself that she doesn’t have friends.

Jin admits that he took the vial of poison, so what’s troubling Michiru? By the way she collapsed at the end, I’m guessing she realized she’d used up all her remaining lifespan with her healing power. It would be very like Michiru to cope with her impending death by trying to make Nana happier.

As for Ishī, we learn that his girlfriend Sorano Fūka had the means and opportunity to kill him, but probably not the motive. It’s also a mystery how anyone managed to kill him, given his ability to hide. Though, one scenario that hasn’t been brought up is that he could have been spooked into being tiny, gotten trapped, and then at that point pretty much anyone could have killed him. 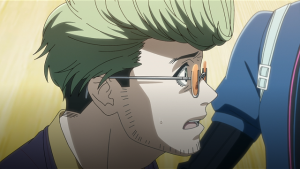 Akudama Drive #10 – The Swindler’s devious accidental master plan has started an all-out uprising. Police misstep after police misstep paves the way for the Akudama to reunite with the Pupil and the newbie for a complicated multi-person standoff, before the survivors are washed aboard the Shinkansen by a helpful mob.

But it really all comes down to one person. The Hoodlum is stuck as the Doctor’s new henchman, but the Swindler breaks the spell by reminding him of his true love, and he finds the strength to strike her down at the cost of his own life. And then gets trampled by the mob, because Akudama Drive is not your show for graceful restraint.

Even Mr. Bunny and Shark Dude seem to be leaning toward the resistance now. And they raise a good point: what does the Shinkansen suddenly want with a bunch of people? Is it the delayed offering? Were the people who developed the immortal children under the impression they were sacrificing them to hold off whatever is about to happen now? 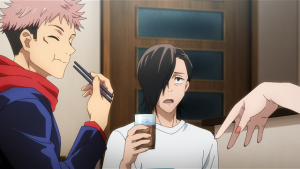 Jujutsu Kaisen #11 – The fight continues for Junpei’s soul. On the one side, there’s Yūji ready to bond with him over a common love of movies, and Junpei’s mom, who may be a chain-smoking alcoholic but clearly cherishes her son in her own way. On the other side, dark forces who think that Cool Mom needs to be made cooler… by fridging her.

For the moment, the urge to enact magical Japan’s answer to the Columbine masscre appears to be winning, but with Yūji on the inside of the barrier, I’m sure he will find a way to flail his way to victory in the name of truth, justice, and friendship. Plus Junpei being shown as Yūji’s classmate in the opening credits every week is kind of a giveaway.

Meanwhile, Mahito has turned out to be a bit much for Nanami even when Nanami activates his special powerup. Which means either Gojō has to be called in, or Nanami is going to have to get over his misgivings about including Yūji in the fight. 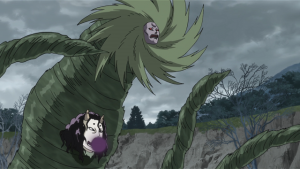 Yashahime: Princess Half-Demon #11 – The girls take yet another bounty which happens to be related to a strange phenomenon they’ve already witnessed. Tōwa and Setsuna are forced to work as a team again thanks to inconveniently distributed abilities. Plus, Setsuna learns the power of music, namely that it can trigger PTSD.

So, nobody had any notable growth, no characters were introduced that we are ever likely to see again, and the weirdly specific toxin resistances will probably be forgotten by next week. It’s the very definition of a filler episode, which is a rare thing to see in this day and age when most shows have to work with 13 episodes or fewer.

Yashahime isn’t bad, really, just desperately unambitious. It has an association with one of the world’s most popular authors to cruise on, and as long as it doesn’t screw things up too badly it can hope to stick around for years. Why bother being edgy or trying to break new ground?

It’s HERE! The long-awaited science fiction parody mash-up of Star Trek and Doctor Who – A Doctor for the Enterprise!