This review originally appeared on the SFReader.com and was reprinted on the website devoted to the novel. It is reproduced here to pay homage to Archbishop John J. Meyers, boyhood friend and co-author of Space Vulture with Gary K. Wolf. This review led directly to my friendship with Gary.

To learn more about their life-long relationship, visit the Space Vulture website. 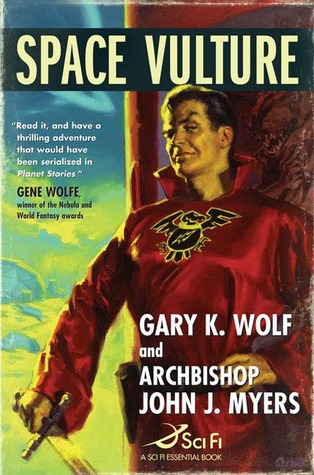 If my own personal reaction to the title of this book is any indication, a lot of people who would enjoy it are going to give it an undeserved pass.

The title, Space Vulture, is certainly evocative of space opera and most definitely not space opera of the contemporary variety. Many readers will immediately be reminded of ‘Doc Smith’, ‘Edmond Hamilton’, ‘Leigh Brackett’, or ‘Edgar Rice Burroughs’. And they’ll be right – but for all of the wrong reasons.

Space Vulture, in a nutshell, is a science fiction tour-de-force, a book deeply layered with multiple themes. Its literary styling shines a spotlight on the often stilted, adjective-laden purple prose of the pulps, and plays experimentally with this form. In developing this approach, the authors not only demonstrate that “purple prose” can be an effective medium, they also show us an entirely new way to approach it.

As briefly mentioned earlier, Space Vulture is chock-full of themes. It’s as tasty and inviting as a gigantic, steaming plate of spaghetti, covered with chunky sauce full of chopped vegetables, sausage, mushrooms, redolent with garlic, pepper and secret ingredients. If you want to get to the taste, just dig in.

The over-riding theme could be titled sharing the joy; this novel’s genesis is found in the boyhood reading of the novel Space Hawk by the prepubescent incarnations of Wolf and Myers; reading Space Vulture has the feel of sitting down with a cherished friend who is dying to share a nifty-keen, way-cool story.

Shared joy and excitement are reflected in the recounting of the tale through various scenes including the making of new friends, unexpected victories, newly discovered talents and success against all odds.

The novel is also a fairly straightforward adventure tale, or at least as straight forward as any planet-busting opera that’s preceded it. The main characters are Gil Terry, Captain Corsaire, Cali, Regin, and Eliot Russell and, of course, the infamous evil-doer Space Vulture.

Despite being on opposite ends of the law, Captain Corsaire and Gil Terry have a shared past, the resolution of which plays a major role in the tale. Cali Russel and her young sons – Regin and Eliot – are accidentally swept up in the galaxy spanning battle between Captain Corsaire, an extra-legal champion of truth, justice and transplanted American ways and Space Vulture, the vilest, smartest, most physically augmented, evilest and prideful villain ever in the history of the universe.

Gil Terry is a petty rogue with a problem. He’s lost an arm and an eye to bookies. His deadline for paying off his debt and recovering his parts is fast approaching. As the story opens, Gil – grafted insectoid arm, Venusian Dung Beetle replacement eye and robotic sidekick in tow – is stealing highly prized mushrooms from the fields of the Verlinap colony. Which just so happens to be the home of Regin, Eliot and Cali.

Gil is almost ready to leave Verlinap with his ill-gotten booty when Captain Corsaire, flying the Integrity, a spaceship almost as famous as he is, swoops in to put the arm on him. Gil’s hopes of physical redemption are dashed.

But wait! Before Corsaire can deliver the manacled Terry to the galaxy’s infamous prison planet Purgatory (from which there is naturally no escape), the Talon, a spaceship even more famous than the Integrity, a Star ‘biggest-fighting-ship-ever-made’ class vessel, swoops in on the colony and renders everyone unconscious through the liberal use of a high density ion beam.

Space Vulture has arrived. Accompanied by his legion of zombiefied space troopers who are led by the infamous number One, a Lizardo reptilian warrior and Number Two, a Bulbo – a race that is the most intelligent species in the Galaxy (who’s heads are so large they require artificial aid to keep them upright) – Space Vulture captures his arch-nemesis and the entire colony to boot.

Corsaire will be eliminated in the most fiendish manner possible, purely for Space Vulture’s enjoyment. Corsaire is the only being capable of countering Space Vulture’s plans. With Mr. Goody-Twoshoes out of the way, Space Vulture can realize his ambitions to become lord of the Galaxy. The colonists will be sold into slavery, adding a not so immodest amount to the Vulture’s treasure. And Gil Terry’s chances of recovering his arm and his eye have gone from slim to none.

But wait! Space Vulture is in the habit of leaving a sole survivor behind. Someone who can relate the horror of his attack, the awfulness of his zombie army, the greatness of his evil, someone who will help spread the terror that is Space Vulture. He chooses to leave Gil. The Talon departs Verlinap, taking Gil Terry’s stolen mushrooms with it.

As if things weren’t bad enough, Gil soon finds himself in loco parentis to Regin and Eliot. The boys have managed to hide out during the raid. They’re frightened but courageous, insisting that Gil use his ship to help them rescue their mother.

And so the adventure begins. 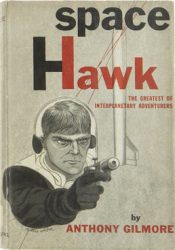 Space Vulture is also a morality tale, presenting the simple concept that good can, through perseverance, pluck and just a dash of deus ex machina, triumph over evil. In fact, most of the sub-plots are deceptively simple: love conquers all, even the worst amongst us can be saved, don’t judge a book by its cover, true evil exists in the world and requires sacrifice to be defeated. And yes, a guy with an insectoid arm can sometimes find true happiness.

Space Vulture is also a positive critique of the space opera genre. The characters are often over-the-top. This presentation serves two purposes. It heightens the contrast of good and evil, creating a stark backdrop for the development of the characters that are not yet in one camp or the other. It also superbly illustrates the point that the relatively recent emphasis on “characterization” in contemporary SF is an overblown affectation and is entirely unnecessary to the telling of an excellent story.

This same theme is additionally found in the plot elements, when, for example, we are asked to believe, over and over again, that Eliot, boy genius or not, is capable of analyzing high technology and putting it to effective use just in the nick of time. On the one hand we know how ridiculous this is. On the other, insectoid and stronger hand, we know that our sense of wonder is fully capable of overriding logic in our quest to be entertained. Knowing this and allowing it to happen are two entirely separate things. Space Vulture argues that if we relax and allow it to happen, we’ll once again be rewarded with the joy that comes from pure childhood escapism.

Along the way we have a chance to re-learn what science fiction is really all about. Angst-ridden characters, deeply researched future technologies, multiple and intricately woven plot elements are all adult hobbies. Science fiction is not an adult enterprise. Its appeal is or should be to childhood ideals. Adulthood is a recognition and a coming to terms with reality, the realization that not everything is possible, that wishes often don’t come true, that evil frequently triumphs over good. Science Fiction is all about allowing yourself to remain open to wondrous possibilities, forgetting the logic and limitations of the real world. Space Vulture illustrates that by eschewing all of the most recent SF literary innovations, it is possible to return to the unvarnished, essential truths of the genre.

The sheer numbers of SF clichés that crowd every page are pure, unadulterated pleasure. Every vision of future possibility is presented here, from sentry robots gone amok, to gigantic-headed aliens, to space battles to abandoned, vine-covered spaceships hidden in the jungle of an alien world. This non-stop revelation of imagery further supports the novel’s contention that SF need not present new visions to be successful; the visions and desires that entertain us when we read are not on the page – they are inside every one of us. By resurrecting them the authors tap directly into the core of our sense-of-wonder, bypassing our logic centers and unleashing our imaginations. Good science fiction requires the active participation of the reader’s imagination. This may be easily achieved by those whose experiences include listening to radio plays but may, unfortunately, be entirely lost on the MTV generation.

Space Vulture is what science fiction was meant to be. Eye-popping visions of things that might be, woven into a tale of hope, love and redemption. Pure wonder on the page, unencumbered by adult concerns, unfettered by the real world. Filled with truths that are self-evident to the child inside, truths that should remain so even when we grow up.

Space Vulture has been nailed to the door of the genre’s holy sepulcher. It calls for a return to the simple truths and the sense of wonder of the genre’s, and our own, childhoods. One can only hope that the reformation is upon us.