T.R. Napper has shovelled over the soil of quantum particles that was cyberpunk to create a new creature entirely 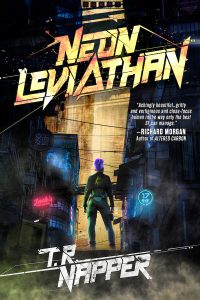 In his excellent collection short stories, Neon Leviathan  (Grimdark Magazine), T.R. Napper has shovelled over the soil of quantum particles that was cyberpunk to create a new creature entirely, albeit with the bones and central precepts of cyberpunk intact.

A central conceit in many of the stories is the idea of the collective consciousness, an idea propounded by the sociologist, Émile Durkheim, something shared but also something to be controlled and even manipulated by the powers that be. In the arresting opening tale, Flame Trees, there is this line: “memories are not just for the individual. They make up our collective consciousness that teaches us who we are and how to be”.

In the story, Chi, a former journalist from Vietnam now living in Australia, experiencing war-related post traumatic stress disorder has an option to erase or delete his traumatic memories. The outcome is both moving and perhaps inevitable, leaving us questioning the value of memories and how they are part of our very natures and create us, no matter how horrific some of them may be.

“Opium for Ezra” captures the zeitgeist of this future world well, captured in a swingeing criticism of John Lennon’s song, “Imagine” by one of the characters, Garry, when he says of Lennon, “Arrogant douche. Wants us to imagine now countries, I wonder if you can. Like his fuken vision is beyond us peons. Newsflash dick-cheese: I live in a world with no country, where there’s nothing to kill or die for, my fucken nation wiped off the face of the earth. The only people think nations don’t matter are those living in the safety of one. Look how the Jews fared without a nation. That ignorant spanker.”

You will probably get a sense from this piece of dialogue, too, of the vibrancy and edginess of the language in this collection. The prose is spare, exacting and unforgiving. No character is without flaws, and the violence, the thoughtful, pensive moments, the descriptions of events, landscape and character are precise, even a little shocking at times.

You could argue that the twelve stories here are a homage to other writers, like Gibson, Sterling, Stephenson and others, but at least the author is open about that, to the point of specific references such as “You’re remembering for them wholesale” (a variant of the title of the famous Philip K. Dick short story, “We Can Remember it for you Wholesale”) in the tale, “Jack’s Fine Dining”.

In Ghosts of a Neon God there is a concept familiar to us all today, which is decision-making nurtured by corporate algorithms, a critical financial driver for corporations like Facebook and other social media enterprises who shape advertising and news based on our online behaviours on their sites and elsewhere.

In the longest, and arguably best, story, The Weight of the Air, The Weight of the World, a newcomer to corporate media, Karla Tessier-Denk writes film and other media reviews, among other pieces, designed to shape perceptions, ideas and public attitudes. There are some familiar elements here, too, but with a twist, such as comic book superheroes like Batman and other transformed into villains, while Lex Luthor and his ilk are the heroes. Karla, like others in the world, is branded with colour codes, which identify them as acceptable to the government, as criminals or midway between, where options for work and social status are severely restricted. In here, too, another familiar idea, that of the Adjustment Bureau (again, echoes of the movie, The Adjustment Bureau based on a Dick story).

The characters range from criminals to soldiers to ordinary people trapped in a system design to crush them into conformist shapes, often with brutal, inhumane tactics.

While I was not completely sold on all of the stories, purely as a matter of personal taste, the majority are certainly arresting, gripping and original and well worth your time.

Some conspiracy theorists have suggested that the Covid-19 pandemic is a deliberate form of governmental control of the population, an argument I don’t go with for a second, but you can see how such an idea need not be to far from a potential reality, something that Napper, who wrote these stories way before the pandemic hit, explores with a fearful intensity.

The Long and Winding Road