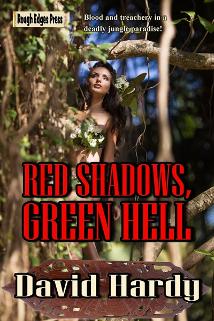 A couple of years ago I reviewed Hardy’s short historical fantasy novel Crazy Greta and called it the book we would have gotten had John Bunyan dropped acid while writing Pilgrim’s Progress. Earlier this year, Hardy showed his versatility with a very different type of historical fantasy, “Red Shadows, Green Hell”.

The setting is the Dutch East Indies in 1859. Patrick “Blackie” Boyle is a soldier for hire who’s there because he’s been run out of just about every country and every job he’s held. Now he finds himself caught between Malay fanatics who would like nothing more than to kill him and savage headhunters who want to shrink his head and wear it as a fashion accessory.

And just to keep things interesting is a wizard who wants to sacrifice the princess Blackie has been assigned to guard. After killing Blackie, of course.

This is an old fashioned adventure story, very much in the vein of Robert E. Howard, Talbot Mundy, and Harold Lamb. There’s a fantasy element, and the alert reader will catch a reference to Lovecraft in one incantation.  In many ways, “Red Shadows, Green Hell” is a homage to some of the biggest names in the pulps.

Hardy keeps the action rolling, but he also takes the time to develop the character of Blackie Boyle, something that’s not easy to do in a tale of only 8,000 words. Blackie is very much a flawed protagonist, one who drinks on duty, regularly uses opium, and doesn’t shy away from violence. But he also has a sense of honor, one that grows as the situation he finds himself in deteriorates.

If you like historical fantasy, then you should check out “Red Shadows, Green Hell”. I’m hoping we haven’t seen the last of Blackie Boyle.

Known more for his works of comic fantasy, Tom Holt serves up humorous science fiction in his latest novel, Doughnut. This move toward SF seems to be a growing trend for Holt, although, since the science in this and his other recent SF comedy, Blonde Bombshell, are playfully implausible, it could be argued that he […]

Interview with a Wizard: Mike Mearls