The anthology Rediscovery: Science Fiction by Women edited by Gideon Marcus from Journey Press bridges the gender divide that had plagued genre fiction for ages. Luckily, the sad truth behind publishing hesitations of works written by women has taken tremendous strides, and talented writers of the past can finally get their deserved recognition. 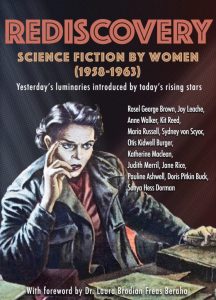 But that wasn’t always the case and it has taken far too long to remedy. During this time, many writers worthy of recognition didn’t always get their just deserves. By no means should this diminish the accolades of those who were auspicious enough to make it to print during this period.

Over time, a number of writers who were influential in the genre, but not part of the iconic few such as Asimov, Clark, and Heinlein were going unnoticed by the general public. Regardless who sits atop your Mt. Rushmore of favorite science fiction writers, there are plenty of women writers who deserve to have their image forever sculptured in stone in that fourth spot (and arguably a few worthy of nudging one of the other big three out of the way). With publications like this, that number of talented writers who inspire others is sure to grow.

The sad truth is, we are losing many of these talents to the dusty boxes of faded pulp magazines tucked away in our mother’s basement. Rediscovery is a reminder that we all need to take a step back and appreciate the talents that paved the way. Be it an older story newly discovered or a forgotten favorite, Gideon Marcus has compiled an impressive list of works from thirteen women writer deserving rediscovery.

Included in the collection:

Utilizing fresh perspectives of issues just as relevant today, the stories here originally appeared in some of the most popular publications during the early Silver Age. Yes, even a couple entries were well represented in our own Amazing Stories (Step IV by Rosel George Brown, The Putnam Tradition by Sonya Hess Dorman)

Over half a decade later, separated from a time when many authors veiled behind initialed pen names to survive in the male centric industry, the one gleaming constant is that these stories aged well. This is vital when trying to introduce new readers to older work. Some of these names may be more familiar than others, but that should change.

We can’t wait to see what Journey Press brings us next because Rediscovery: Science Fiction by Women is a bright reminder of what science fiction fandom is all about.