Home Fandom Review: All the Time in the World by Arthur C. Clarke

After reviewing eight of the short stories from the 1978 Puffin Publishing anthology “The Worlds of Arthur C. Clarke – Of Time and Stars,” we finally come to an entertaining work titled All the Time in the World (read the full story here at UNZ), which has inspired countless other works of time travel over the years as well as taken the rare leap over to other forms of media. 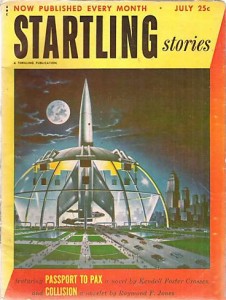 First appearing in the July 1952 issue of the pulp magazine Startling Stories (vol. 26, no. 3), All the Time in the World opened the eyes of fandom with its unique twist on history, time travel, alien civilizations and the impact they can play on each other. Startling Stories was in print between January 1939 and October of 1955, and it is doubtful that the editor of the 1952 edition, Samuel Mines, realized what they had on pages 69 through 76.

The story starts out like an old Mickey Spillane novel with the first person narrator Robert Ashton describing his setting just as a strange woman enters his room. The main difference being that our hero is actually a thief, and the attractive woman is not the usual damsel in distress. Here, the no-named character is the consciousness from an alien race sent back almost a hundred thousand years in time and taken the form of the woman Ashton encounters.

The priceless items the woman asks Ashton to steal from the British Museum are not for their value on the black market, but for their value as artifacts from a dying planet. When she first introduced herself to Ashton as a collector, she was more truthful than readers might have originally suspected. And in the shadow of “The Super Bomb Test” about to be unleashed, humanity’s only remaining footprint just might be the artifacts Ashton helped secure for eternity.

Readers are left considering the gut wrenching choice our hero must make. Do you leave the world around you frozen in time while you age slowly? Do you let the clock start ticking again, if only for a couple minutes before the world ends? Fortunately, just like Ashton, readers have a lifetime to decide. 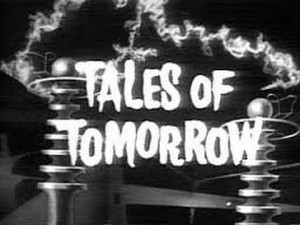 The story was also a popular episode on the television show Tales of Tomorrow (season 1, episode 37) first airing on June 13, 1952. Ironically, Clarke’s memory of this episode is far less impressive than many fans might assume as stated in a quote from the 2000 Great Britain Victor Gollancz publication The Collected Stories of Arthur C. Clarke:

“This was my first short ever to be adapted for TV – ABC 13 June 1952. Although I worked on the script, I have absolutely no recollection of the programme, and can’t imagine how it was produced in pre-video-tape days!”

Narrated by Nicholas Boulton, the story also has a direct reading on BBC Radio and can be heard here.

Unlike the character Robert Ashton, we do not have All the Time in the World. So hurry up, take a step back in time and enjoy another thought provoking story by Arthur C. Clarke. Be it film, radio, or just reading the short story, this is a must for every member of fandom to experience.