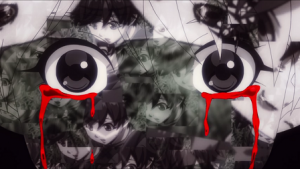 The Girl in Twilight finale – With four of the five girls now able to fight the creatures of Twilight, and their own timeline in immediate danger, it’s time for a big boss fight. But then Asuka shocks everyone by volunteering to go see the Twilight willingly. What’s she going to do, talk it to death?

Yes, as it turns out. Or, at least, she can deprive it of its emissary by giving herself the words of condolence she needed to hear. And then both Asukas can dedicate themselves to accepting what they can’t change and doing better.

It is a brave choice for a show publicizing a game to have a story about things that can’t be fixed. Kyōhei is gone forever, and Twilight rages on in other timelines— though that means there’s something for the game players to fight…

Given that there was little to expect from this show to begin with, being based on a video game, it has done amazing things. I’d warn anyone interested in it about the fairly mild version of the tired Aggressive Lesbian schtick and the obligatory swimsuit episode, but it is good enough even despite that to be good. Maybe even the best thing ending this season. 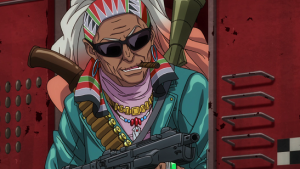 Double Decker! Doug & Kirill #12 – We were promised that Kirill would turn out to have a special power, and indeed he finally does: he’s immune to Anthem. Which does turn out to be the source of power for the Bamboo Man, who does turn out to be from Nikai, which does turn out to be behind the Anthem distribution network. By the time everyone figures this out, Kirill is already in the military’s clutches, which means, by the logic of the buddy cop action show, it’s time for an over-the-top rescue with every resource the remainder of Seven-O can scrape together including Doug’s old partner and Kirill’s landlady.

By the same logic, though, the next-to-last episode needs to give us a cliffhanger where it appears all is lost. If you believe this is the next-to-last episode. The announcer has faked us out before, so I wouldn’t be a bit surprised if next week it’s “the last episode… of the year!” or if it turns out to be a show within a show and zooms out from that to continue the story.

If this really is the last one coming up, and this is a prequel to Tiger & Bunny, then it has a ridiculous amount of ground left to cover in half an hour. It’s got to get rid of Nikai, introduce superpowers of the sort we saw in T&B, bring in someone named Ivan Petrov (or change someone’s name to that), and fill in the backstory of the landlady. Okay, that last part isn’t strictly necessary, but I’m going to feel cheated without it. I’m hoping she turns out to be part of a saner Nikaian faction. 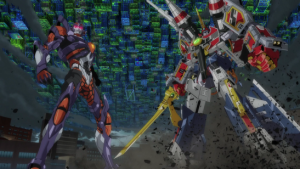 SSSS.Gridman #11 – Akane’s world is falling apart, and so is Akane. She even tells Alexis she’s out of the monster-making business, so he brings back all the previous monsters for a second go. Faced with this unprecedented crisis, all the heroes rush to Yūta’s bedside and have a big argument.

The problem is that the weapons won’t fight without Gridman, even though they did that very thing two episodes ago. The real problem is that the live-action monster-fighting genre this show draws from is requires a new attack or form for every fight. So Gridknight gets out there and holds things off until everyone else figures out that fixing Junk is the same thing as reviving Gridman. Because Yūta isn’t really Yūta; Yūta is just another NPC and the person who’s been walking around in his body is Gridman.

Meanwhile, Shō develops sudden-onset angst, setting him up to something either shocking or heroic in the finale, and Rikka runs off to try and talk sense into Akane one more time. But Akane has been selected as the final boss, before her world is finally unwound and everyone who can returns to reality.

What else might be on tap for the last episode? One fan rumor is that there will be some live action, which sounds entirely plausible at this point. 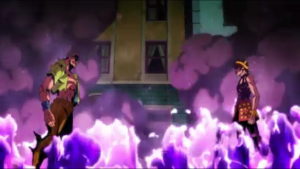 JoJo’s Bizarre Adventure: Golden Wind #11 – Narancia was a good kid who fell in with a bad crowd, and even that didn’t turn out well for him at first. But something about a life of crime made him try again after meeting Bruno, and so he finds himself here, in the third week of a duel that is really starting to drag. With the same stubborn directness that got him onto Bruno’s team, his solution is to set everything on fire and wait for Formaggio to be smoked out.

That finally over, Narancia finally drags himself back to the hideout he worked so hard to not reveal, only to discover that it’s time to move to the next scenic location. Whatever is up now, one thing is certain: there’s still one guy who hasn’t had a chance to strut his stuff, and the season is running out of time for it. 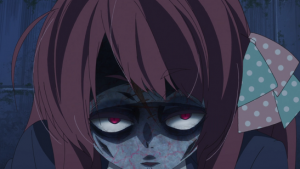 Zombie Land Saga #11 – Once again, Sakura wakes up in a house full of zombies, freaks out, and winds up running out into the rain to terrify the local policemen. And that’s not the only thing being replayed, because the idols now have to go through the “member doesn’t feel like she fits in and wants to quit” plot a second time.

The real Sakura is depressed and cynical after a lifetime of working hard only to see her chances snatched away by freak accidents. Where it was fun to watch the earnest enthusiasm of the amnesiac running up against the inherent struggles of zombie idoldom, the new Sakura is like a wet blanket to the whole show. Which may be the point, but it’s a reminder that this was a better show before it decided to play things straight.