In this week’s viewing: Dr. Stone brings another modern comfort to the Stone Age, Welcome to Demon School examines a mixed blessing, and more! 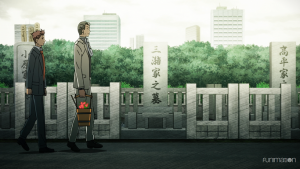 Special 7: Special Crime Investigation Unit #7 – Everyone gets the day off, except for the writer, who has a ton of information to drop before the next terror plot ramps up. For a start, Mizuwa is confirmed as the missing number three, with the character 三 at the beginning of the name on the family grave. (Mi is an archaic word for “three”, showing up sometimes in names and counting words.)

Kiryūin tips his hand here to show just how much he knows. He doubts that Mizuwa is dead, he knows exactly what’s going on with Seiji and isn’t afraid to admit it to Ichinose, and he talks about the development of modern institutions a bit like he’s witnessed the whole process personally. He has to be one of the dragons, or a close descendant of them.

Warlock is apparently not one of them, as he only developed dragon-related powers after the ritual at the airport nine years ago. Mizuwa isn’t either, since he was dying until the dragon blood healed him. That leaves open the question of what Warlock saw in him, that was worth reviving him and having to switch off his conscience.

Meanwhile, Nijō gets a data dump of what’s really going on in the world. Apparently it means that Unit 7 is in danger, which dovetails with Kiryūin’s suggestion that they’ll be disbanded if they become too noticeable. Which suggests that someone in Public Safety has an interest in helping the dragons out. Someone working under Warlock’s orders, or a completely separate cultist?

One last odd point is the obscuring of Mr. Shikisai’s face. Who might we recognize him as? The Law of Character Economy points to Nijō’s friend at the bar, for now. 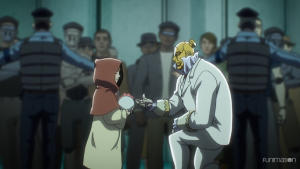 No Guns Life #6 – With most of his potential distractions locked away for safekeeping, Inui follows Hayden Gondry’s trail. Thanks to a handy Kojak Moment (Roger Ebert’s term for when the detective finds the photo of the murderer and all the victims), he deduces that the next target is the very first Extended, the last of Gondry’s old army comrades, now lionized as a war hero.

Either Gondry has had some new work done, or the initial experimental cyborg work was extremely varied. I’m leaning toward the former— the ability to modify his own body to the extent of looking like a little girl seems awfully advanced for a first-generation model.

Then again, a lot is skewed about the technology available. Super-advanced cybernetics are common, but the only other computer-like systems we’ve seen were on the Berühren train. The cameras we saw this week are pre-electronic. Yet this world does seem to share our past at least as far as the mid-1970s. According to my in-house automotive expert, Kronen’s Corvette belongs to the 1968-1982 generation, and Olivier’s staff car is a Russian limo dating from the early ’70s.

Nearly everything can be explained if what we’re looking at is not a near-future setting, but an alternate timeline diverging around 1980. The retro cameras are still a puzzle though. 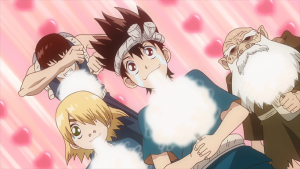 Dr. Stone #20 – Everyone decides they’re not going to have a war until the spring. Though that’s still a tight schedule, Senkū’s quest to bring mobile phones back to the world finds room to stop at cotton candy and gears, and Chrome has time to sneak off and invent the hydroelectric power plant.

Dr. Stone does a great job this week of showing how previous inventions lead to new ones. Sure, we’ve seen the roadmaps for sulfa drugs and telephones, but those were entirely pre-planned. Chrome shows how someone can take things they’re familiar with— a water-driven wheel, the electric generator, and gears— to make something entirely new to them.

Back in Tsukasa’s domain, we get a little more info about what Taiju and Yuzuriha. Even though Tsukasa realizes they’re a threat, they’re apparently allowed to live freely for the time being. So what exactly are they doing, since they probably aren’t wholeheartedly devoted to the war effort? 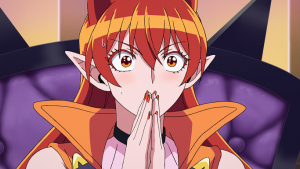 Welcome to Demon School! Iruma-kun #7 – Iruma fully outs himself when he lets on that he can read Japanese, but luckily this fact makes him useful enough for Ameri to not turn him in. That solves one problem but introduces a bunch more, like having to explain purely human customs that Iruma is one of the least qualified people in the world to explain.

All this flailing around about dating, love, friendship, and so forth is a timely reminder that this show really is aimed at a younger teen/pre-teen audience that isn’t very clear on some of this themselves. Iruma struggling to get past his embarrassment and trying to articulate his thoughts for Ameri puts him in the place of the viewer who is being challenged by life to start making sense of these things.

Iruma’s past work as a manga assistant is a sympathetic nod from the anime makers to their fellow creatives. Remember that Iruma’s parents were always signing him up for horrible jobs? Manga artists have notoriously grueling schedules, and their assistants endure the same thing for even less pay. 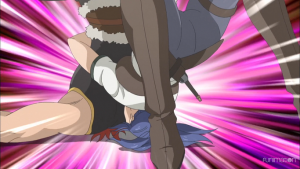 Kemono Michi: Rise Up #7 – Genzō’s newest obstacle to building up his pet shop is a young warrior who wants to be his student. But when he trains her to be the best lady wrestler her world has ever seen, it turns out there might be an audience for this sort of thing. A very lucrative audience.

Yay for a story that acknowledges that harassees get picked on just for having the bad luck to be the most socially acceptable target available. Also yay for having the hero stand up and support the accuser in her quest for justice, even after she starts losing her nerve.

Now the magical world has at least four wrestlers— not just Genzō and the Ogre, but Celes and Destroyer Hanako. If Genzō could be convinced to compromise his principles a tiny bit and train ordinary humans too, they could build an entire league and redirect at least some of the beast hunters to a more humane career. Cash prizes might also take financing away from the guild. Maybe what Genzō needs to defeat the beast-hunting culture is just a little capitalism on top of his fighting skills.

SPACE: Could “Water Bear” DNA Help Us Survive on Mars?