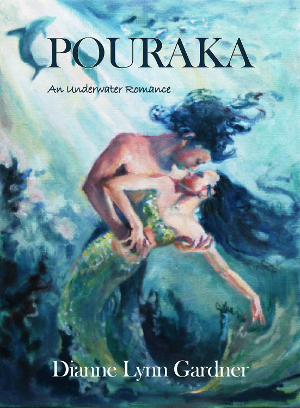 Dianne Lynn Gardner weaves a tale (pun intended) about a group of merpeople who live in the waters surrounding Talbatha Island. After a deadly harpoon attack by humans against the mers living along the southern portion of the island, the surviving mers set off for northern waters, hoping to find their remaining clan or at least quiet, calm waters where they can live peacefully. What they find is another clan of mers living in Pouraka, the waters surrounding the northern portion of the island, near a town called Barnacle Bay.

Tas, the leader of the southern mers, becomes suspicious of the humans who have befriended the northern mers, despite the defense raised by his northern mermaid lover, Cora. Human residents of Barnacle Bay are aware that mers live in the waters there, and have sworn to protect the secret of their existence. Cora defends the human residents of Barnacle Bay to Tas, particularly her close friend Beth, and Beth’s father, Leni.

Trouble finds Pouraka’s peaceful waters when an oil rigger’s unscrupulous son travels to Barnacle Bay to capture dolphins, hoping to sell them to aquariums, or to slaughter them for their meat. While each mer clan has their own set of ways and traditions and are suspicious of mers not from their clan, they realize that perhaps together, they can bring power to their plight: The mers face numerous obstacles, and their secrets are revealed in their frantic efforts to save the dolphins – and themselves.

Gardner brings to life an underwater world, artfully describing the hidden pools where merpeople transform into human form, the underwater ship where dolphins hide from human hunters, and the frantic struggles of the underwater dwellers to escape the hunters who bring their nets up and capture fish, dolphins, and mers.

Her crafty descriptions of the oil rigger’s son as a ruthless SOB will make the reader immediately hate him. The northern mers, who previously had no trouble with humans, are depicted as reluctant to accept that there are hateful people who want to harm them. Gardner skillfully brings their awareness and acceptance to the surface, presenting surprising solutions.

This book is a good fit for the YA audience.

French small presses pick up the slack in genre when the publishers fail to create imprints.