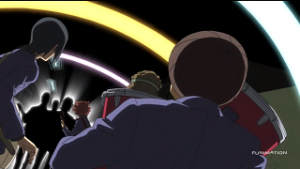 Concrete Revolutio #6 – After weeks of densely packed symoblism, Concrete Revolutio takes it easy for an episode and sticks with a simple thesis on the topic of The Beatles Are Awesome and Ringo Is the Most Awesome Of Them All.

Since the actual Beatles cannot be forced to star in an anime, they are relegated to a crucial plot point (bringing up the question, for the first time, of why Japan is inundated with superhumans at this particular time in history) and we get to watch their second-rate Japanese stand-ins fight the political powers that want to crush peace and joy and free love.

It’s an offhand comment by the marketer that explains everything that’s been going on since the first “Beast History” episode. The government doesn’t want to get rid of the superhumans, but it wants to have control over how they’re introduced to society. GāGon couldn’t be allowed to live for long once it was allied with the student demonstrators, because they were anti-government. The Angel Stars are formed by the government as it continues to try to dictate what is acceptable, both in music and in superherodom.

And the Superhuman Bureau is part of that control. That’s what Jirō has rebelled against. 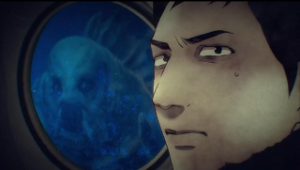 Kagewani #6 – The monsters even exist in the polar oceans, and Professor Bamba has somehow guessed where one might show up. The new twist this week is that the monster can mimic the distress signals from submersibles. Just something it’s picked up from living in the deep ocean, or is it another ex-human operating on some vague recollection?

We will probably never know. Kagewani is really all about the atmosphere, and in that respect it pulls off another great terrifying encounter. 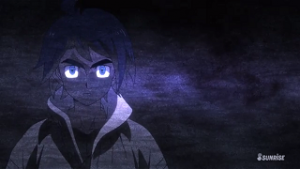 Mobile Suit Gundam: Iron-Blooded Orphans #6 – Having made it into interplanetary space, the next step in the epic journey to Earth is, of course, Jupiter. Because one does not simply walk into Earth orbit; one needs a fixer. So Tekkadan needs to hook up with a bunch called Teiwaz, which I’m going to guess is going to bring in the pimp-y guy from the opening credits.

The Solar System is now quite clearly set up as an Africa analogue, as Kudelia explains how it was arbitrarily divided up between the colonial powers. The one that owns Mars is Arbrau, which consists of most of the global north including Japan. In fact, the head of Arbrau is apparently Japanese. Stay tuned for possible commentary on Japan’s attempts at imperialism in the early 20th century.

As life starts settling into a routine, Fumitan makes herself invaluable all of a sudden. It was clear early on that she was more a bodyguard than a maid, but now she’s getting into areas beyond even bodyguard expertise. I’d love to know who she’s really working for, and how she wound up in the Berstein household. 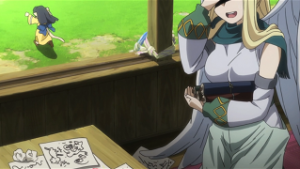 Utawarerumono: The False Faces #6 – One minute Haku is having drinks in the sauna with a beautiful mysterious woman, and the next he’s in the middle of an awkward family reunion. Unbeknownst to everyone, two of Kuon’s several mothers are running the famous inn our heroes have been using as a base of operations.

So, no plot development again this week, but we get some more details about Kuon’s life and her world. Her country is Tuskuru, which has more than art, food, and customs in common with the Ainu– it’s also worried about the growth of the neighboring Yamato people. (Yamato is the name for the dominant ethnic group in modern Japan; the Ainu were there first but were pushed out of most of the main islands.)

Yamato itself is very reminiscent of medieval Japan, except for that shiny ziggurat which sticks out more and more like a sore thumb everytime there’s a wide shot of the capital city. Let’s hope Haku gets an excuse to visit it soon; that’s where the plot is is hiding!