Designing an interstellar cruiseliner is not as straightforward as one might suppose.

This week’s topic: What place in your own books do you most want to visit and why? I had to ponder this one a bit because in my books it’s not really about the place, as it is about the planet or the ship…or ancient Egypt, sometimes.
I’ll leave ancient Egypt for another post because I decided for today I’d choose my interstellar cruise liner of the far future, the Nebula Zephyr, which  has featured in a number of my science fiction romance novels. She’s run by an AI named Maeve, who’s a bit terrifying. She’s actually a military AI, who used to run a huge Sectors battleship and who would have been terminated when her ship was decommissioned except for Captain
Fleming. He was the last captain of Maeve’s battleship and he managed to somehow have her transferred from that ship into the brand new luxury liner he was taking command of upon his own retirement. Maeve does a great job of running the luxury liner of course but remains military at heart and little
glimpses of that attitude show through in some of the stories.
The CLC Line is run by veterans,  in part to provide good jobs for veterans, so they’re quite understanding of some of the things my captain and crew do in the course of the books. As Captain Fleming explains in Star Cruise: Stowaway, “I always had Special Forces Teams as key elements of my strategy when I commanded a battleship,” he said as he sat and stirred cinna spice into his drink. “When I agreed to join the CLC Line, I saw no reason not to have a similar capacity on board. As we’ve seen in recent years with the rise in space piracy and other challenges, even a civilian vessel may need a core of well-trained operators at some juncture. Jake Dilon is one of the finest Special Forces officers I ever met, and I back his decisions. Anything he and his team did for you was under my authority. I’m the man in command, and the responsibility is mine.”
I always admired the Flying Tigers who came home from World War II and set up their own airline, so the CLC Line and its corporate policy was my little tribute to those pilots.
Maybe someday I’ll tell the story of Maeve and the captain, which readers frequently ask me for, but it’s not on my list of upcoming books.
I never really define what the Nebula Zephyr looks like from the exterior. Partly that’s so I can use whatever stock photos are available to me for the cover art and not upset anyone too much. I do have a detailed layout of the ship in a notebook that I refer to fairly often. Suffice it to say she’s a huge ship, with twenty decks or levels, which gives me a lot of room to have adventurous plots.
Below the bridge deck, Level A has the huge casino, the observatory (where Maeve can order up any galaxy or star system a passenger might wish to see), restaurants, shops, the theater where the Comettes dance troupe performs, a host of other amusements and entertainments for the passengers and a state of the art sickbay, presided over by Dr. Emily Shane, heroine of Star Cruise: Outbreak.
Nebula Zephyr carries cargo as well as passengers, with two entire levels devoted to the cargo hold, run by Cargo Master Owen Embersson, who took the lead in Star Cruise: Stowaway.  In this respect I adopted the Titanic era model, where the vessel was a luxury liner and a working cargo ship. Captain Fleming is very deferential to the Cargo Master, because transporting interstellar freight is a highly lucrative business and the CLC Line does expect its ships to turn a nice profit.
Level 5 is the beach, with the entire space given over to an ‘ocean’, with special water and sand brought from the resort planet Tahumaroa Two and elaborate holograms projected  by Maeve for the enjoyment of passengers and crew. It’s not a holodeck like the Star Trek concept, where all kinds of adventures can occur, but it’s a great site for parties, volleyball and late night strolls. My characters go there often. The water gets quite deep, there are waves and everyone seems to have a good time there. Mostly.
Movement between levels is via antigrav tubes, although there are some retro stairs for passengers with an aversion to antigrav.
As you might expect the Nebula Zephyr has a five star chef in charge of fine dining and all food operations. I always enjoy working Chef Stephanie and her kitchen into the plot – it gives me a chance to draw upon all those seasons of watching ‘Top Chef’!
There’s a lot more to the Nebula Zephyr (and new features come up regularly in the books) but I think I’d really enjoy my time aboard the ship, mingling with the other passengers, who range from the very rich in First Class -the ‘Generational Billionaires’ and ‘Socialites’ (also very rich but young, heedlessly arrogant and constantly pleasure seeking) to the solid  and sturdy Second Class of your more every day Sectors citizen. (There is no Third Class in the Sectors.) I’d devour Chef Stephanie’s gastronomic delights, take in a lot of shows, gamble at the Casino, get to know the members of the crew I write so much about…maybe even have a romance and HEA of my own with one of the ex-Special Forces Security Officers (Jake Dilon alas is spoken for, being married to Dr. Shane.)… I think I’d probably want to stay aboard forever, maybe as their Writer in Residence, which as yet the ship doesn’t have! 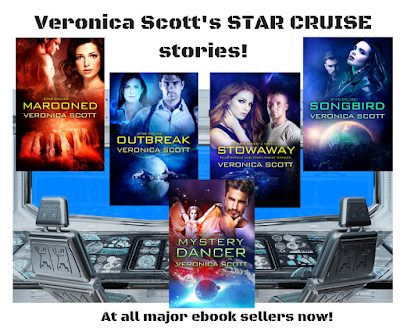