In this week’s episode: Kemono Michi adds dragons, Special 7 explains its dragons a bit, and more! 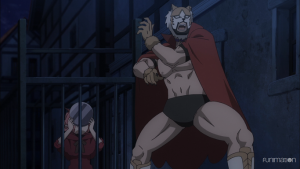 Kemono Michi: Rise Up #3 – When danger threatens the town itself, Genzō resurrects his wrestling persona as a caped crusader against evil. Unfortunately the town watch is not supportive of his efforts. Well, you do have to admit that a nearly-naked man standing next to a cage with a little girl in it is a pretty sketchy scene in just about any world.

Dragons in this world are a weird amalgam of Chinese dragons (the ability to assume a human form), European vampires, and random devilry, like someone just threw together a bunch of random Bad Stuff to make them as threatening as possible. Then again, it’s a nice touch to give them strength which isn’t completely outside the human range.

This episode got off to a slow start, but it was worth it eventually. And now Genzō doesn’t just have a shop assistant, he’s got a masked crimefighting sidekick! This should be fun. 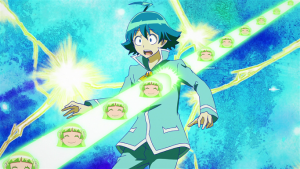 Welcome to Demon School! Iruma-kun #3 – With Snape out of the way (for now, anyway), Harry befriends Luna Lovegood, and they learn important lessons about how friendship should not be transactional and creators should be paid for their work. Wait, sorry, I mean Kalegle, Iruma, and Clara Valac.

Like in so much sf, humans have a secret weapon called The Power of Friendship. Demons certainly have some kind of concept of being pleasantly disposed toward people they hang out with, but it is apparently not anything they especially aspire to. The friend-like groups will have to turn out to be enforced by some other kind of social structure, I guess.

The “Murder House” segment is a new demonstration of how this show can take anything and put a weird, dark spin on it. And being willing to throw that darkness in regardless of what some of the adults seeing the show will think is a hallmark of the best children’s stories. 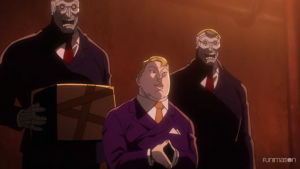 No Guns Life #2 – Inui rescues his client by punching a train off its tracks and fighting a small army of cyborgs, then goes out looking for a pack of cigarettes. And that’s when things get really dangerous.

Now that we’ve been introduced to the main characters, it’s time to lay out the rules under which they have to operate. Inui hasn’t just gotten hooked on nicotine, he needs those cigarettes to mitigate the side effects of being excessively cyborgified. (Incidentally, the name Tanegashima is yet another gun reference.) He also might have a backdoor in his software that could allow Berühren to take control of him, though for now they are sticking to other means of control.

Filling in the details also helps solidify the setting. It looks like it’s meant to be real Japan— far enough in the future to have removed the self-defense clause from its constitution and had a real live foreign war, but not so far that it has lost its popular disdain for immigrants. 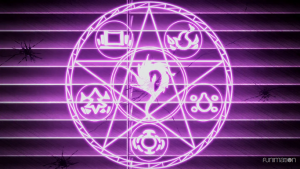 Special 7: Special Crime Investigation Unit #3 – A bomb threat brings the team a new chance to justify their existence as they have to disarm a deviously complicated explosive system. It also provides a chance to bring up the topic of magic. Once it’s mentioned, it’s everywhere: homonculi, magic sigils, and that thing that the boss claims is a drone but which is clearly a fire lizard.

Special 7 has some more fun with action tropes here, particularly by showing that the only proper use for a countdown clock on a bomb is to create false expectations. How Belle manages to work out that the bombs need to be disarmed in sequence comes out as unnecessarily hand-wavy after that, unfortunately.

We also get the most blatant demonstration yet that Seiji is more than he appears. If Ichinose hadn’t noticed anything before, seeing Seiji just arbitrarily block magic with his hands will have done it.

Speaking of things in plain sight, I really should mention the numerical themes. Not only do the episodes get titles with numbers, but let’s look at the Japanese words for the first few numbers:

Knowing that cinq is French for 5, do you see the pattern? More importantly, do you see what’s missing? I wonder what happened to them… 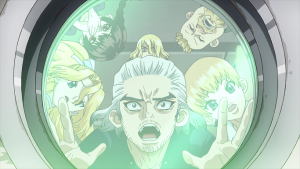 Dr. Stone #16 – Not all the human race was petrified over three thousand years ago. The inhabitants of the International Space Station were spared, and among them was Senkū’s father. That is the first part of the explanation that leads to the village sharing his last name, the surprising number of white people there, and Ruri realizing she already knew who Senkū is.

Well, it’s not quite a shaggy-god story, but this is a very pulp sf situation the astronauts find themselves in. It’s also not one that pulp sf ever handled with much grace as far as I know. At least this comes from a subgenre where we can expect no lengthy digressions on the author’s own social theories about marriage and procreation. With an even gender balance, and probably zero inconvenient gays or infertile people, the whole starting-the-village business should be over well before the end of the next episode. Hopefully.

Who (right!) was the BEST Doctor? Pertwee? Baker? Baker? Eccleston? Hartnell? I don’t know, but according to Abbot, he’s on first base!