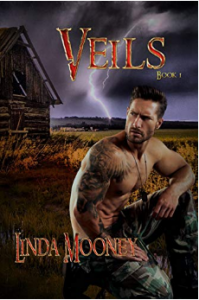 Time for more science fiction new releases to fill the ereader, the bookshelf and the To Be Read List!

Post-apocalyptic and dystopian is a favorite subgenre of mine, going back to the first time I read Alas, Babylon by Pat Frank, so novels mining this type of event really grab me. I one-clicked Veils by Linda Mooney because it fits the bill, with perhaps a touch of ‘Twilight Zone’ weirdness thrown in. Planning to read this over the weekend! The blurb: After three tours of duty, and serving the last four years overseas, Griffin Strong is looking forward to finally returning home and living out his life without bombings and bloodshed. After a 300-mile drive home, a quick trip through the car wash ends in another reality. An eerie, fog-covered reality where he is all alone…or so he thought.

With no electricity, cars that don’t function, and guns that won’t fire, Griff has to find protection for himself, but protection against what exactly? What the hell even happened? Survival instincts kicking in, he stocks up on whatever he can carry, and sets out on his own.

Griff soon learns that he’s not completely alone, although life of any form is rare to come across, but whom can he trust?

When the subway in Manhattan dumps Natalia Westfall in a snow-covered, deserted town far from New York, she’s left alone, frozen, and desperate. Hope lies in a uniformed military man, but will he want to be weighed down by a sick, weak female like her? Griff takes a chance, and it doesn’t take him long to learn she’s anything but weak.

Facing thirst, starvation, acid rain, enemies, and extreme temps–what will get them first? The odds are stacked against them, and all they can count on is each other. 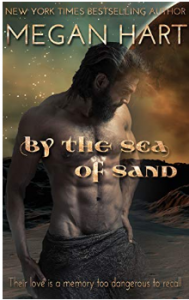 By the Sea of Sand by New York Times and USA Today Best Selling Author Megan Hart intrigued me and I one-clicked it too. The ‘look inside’ excerpt on the book seller’s page gave some wonderful, detailed world building and I wanted to keep reading. Here’s the synopsis:  Their love is a memory too dangerous to recall.

Life is not easy by the Sea of Sand. The remote outpost and its lighthouse were never meant to serve as a place for wounded soldiers to recover, but that’s what it has become. Teila has lived in the lighthouse for her entire life, and now she also takes care of the men and women who gave their sanity fighting the Wirthera’s hive mind.

Captain Kason Reed was willing to give his life for the Sheirran Defense Forces, but now he can’t remember anything except bits and pieces of the war. When his attraction to his caregiver, Teila, causes him to make advances toward her, she becomes the aggressor, urging him with her body to explore the memories of his past—memories that all seem to draw him back to Teila…

Those returned by the Wirthera never come back whole. Their bodies are flooded with nanobots designed to trigger homicidal rage when the soldiers remember what happened to them. No matter how much Teila wants her new patient to remember her and the life they shared, before, she can’t remind him. 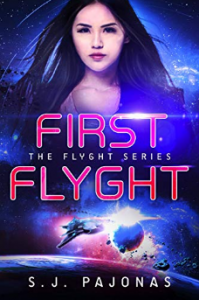 First Flyght by USA today Best Selling Author S. J. Pajonas represents her return to the SFR genre, after writing quite a few mysteries and readers were excited to have a new title from her. The  plot: Vivian Kawabata can’t wait to claim her privileged destiny. But when the heir to the family agricultural empire finds her bank account empty while shopping for expensive shoes, she’s horrified to discover that her own brother has financially stabbed her in the back. To stand a chance of restoring her rightful place in the universe, the honest and rule-following Vivian may have to break a few intergalactic laws.

After securing an old ship from her aunt, Vivian takes on two new roles: a sexy heiress collecting eligible husbands and a hard-nosed captain rebuilding a lost fortune by any means necessary. Completely out of her depth, she’d be sunk without the help of a relationship broker, a handsome ex-boyfriend, a hacker with a heart of gold, and the other potential partners she meets along the way. With a business that runs the razor’s edge between trade and smuggling, can the former high-society socialite get the money she needs or will her brazen ambition lead to a deadly crash landing? 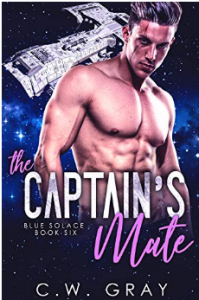 Author C. W. Gray returns to the Blue Solace with The Captain’s Mate and spins another engrossing tale. The synopsis: Draif Ando started life as a slave on Vextonar. When he was fifteen, he met his best friend, Leti Ando, and life got a lot better. Now he’s a Charybdis Station captain and works closely with the Lord Admiral of the Station. He is a free man, finally has a purpose of his own, and has the the best lieutenant in the galaxy by his side. If he’s so content, why does he yearn for more, and why is he suddenly picturing children with his eyes and Lucas’ ears and tail?

Draif and Lucas may finally be figuring their relationship out, but their enemies are approaching and it’s time to protect Charybdis Station and rid the galaxy of Humans First, once and for all. 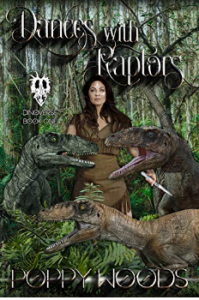 Dances With Raptors by Poppy Woods is something completely different, a reverse harem novel with dinosaurs walking among us. Here’s the eye popping plot: People think that a meteor or some super volcano wiped them all out, or that aliens saved them like a holy arc coming from the sky. Some think that they had their time and were selected for extinction.

The thing is, fossils only show those that died. . .

Dinosaurs still walk among us, hidden in human form, bidding their time until they’re able to reveal who they are. Humans are always placed at the top of the food chain.

Nothing could be further from the truth. . .

The next matriarch has been chosen. . .

Sage has never wanted anything other than the freedom to live her own life, but when she is chosen as the next Matriarch of her people, everything changes. Sent on a journey to pass the tests of her ancestors, Sage must find her place in this world even though she doesn’t know if she believes in the very spirits who chose her for the position.

As if her life isn’t complicated enough, she finds herself on the run with a pack of raptor shifters. Sage’s newfound allies are dangerous predators but the attraction she feels to them is undeniable.

With a new threat to the peninsula, Sage has her work cut out for her. No one said being the Matriarch would be easy.

Can she make it back to her people with her body–and her heart–intact? Can she stop the traders who threaten her very way of life? 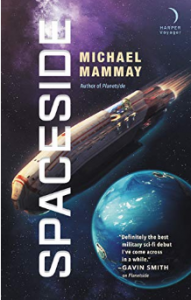 I want to briefly mention  Spaceside (Planetside Book 2) by Michael Mammay, which is military science fiction at its finest. (Not romance!) I loved the first book and have eagerly awaited this sequel. Here’s the story: A military legend is caught in the web between alien intrigue and human subterfuge…

Following his mission on Cappa, Colonel Carl Butler returns to a mixed reception. To some he is a do-or-die war hero. To the other half of the galaxy he’s a pariah. Forced into retirement, he has resettled on Talca Four where he’s now Deputy VP of Corporate Security, protecting a high-tech military company on the corporate battlefield—at least, that’s what the job description says. Really, he’s just there to impress clients and investors. It’s all relatively low risk—until he’s entrusted with new orders. A breach of a competitor’s computer network has Butler’s superiors feeling every bit as vulnerable. They need Butler to find who did it, how, and why no one’s taken credit for the ingenious attack.

As accustomed as Butler is to the reality of wargames—virtual and otherwise—this one screams something louder than a simple hack. Because no sooner does he start digging when his first contact is murdered, the death somehow kept secret from the media. As a prime suspect, he can’t shake the sensation he’s being watched…or finally succumbing to the stress of his past. Paranoid delusion or dangerous reality, Butler might be onto something much deeper than anyone imagined. But that’s where Butler thrives.

If he hasn’t signed his own death warrant. 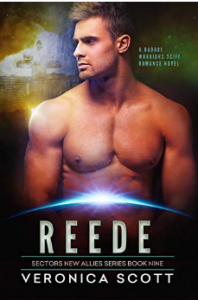 And lastly I had a new release in my Badari Warriors series about genetically engineered soldiers of the far future. The new book is Reede (Sectors New Allies Book 9) and here’s the blurb: Lt. Fallyn Damara was sent by the Sectors to investigate a strange transmission from an isolated planet and determine whether the residents of a vanished colony had been transported there by alien enemies. Fallyn’s ship crashes and she’s taken prisoner by the Khagrish scientists, to await her fate in the slate of horrifying experiments being conducted.

Reede, the second ranking enforcer in the Badari Warrior pack, volunteers to be recaptured by the Khagrish in an effort to locate and rescue Fallyn inside the deadly lab complex.

While a prisoner Reede discovers Fallyn is the woman destined to become his fated mate but the moment is bittersweet because Fallyn will be leaving their world at the first opportunity, to report back to the Sectors. He refuses to complete the mate bond, believing to do so will lead to nothing but lifelong misery for them both, separated by lightyears and interstellar politics.

For her part, Fallyn wants to shake up the rule-bound enforcer and persuade him to take a chance on love.

But first they have to escape the Khagrish.

Oops, no cyborgs this time! I promise to have at least one in the next post …happy reading as we head into Fall!