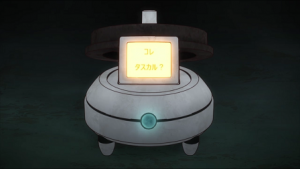 kemurikusa. #5 – Wakaba will be a great eccentric scientist someday, if he survives to adulthood. With patient observation and experimentation, he has started to unlock far greater powers of the kemurikusa than the sisters ever existed. But without some caution to temper his curiosity, he winds up lost in the subway beneath Island Six and confronted by a new, hostile resident.

The green kemurikusa can do far more than just mend broken things; it generates entirely new components out of (seemingly) thin air when repairing the subway car. This implies it is either outright magic, or sufficiently advanced technology that it incorporates a knowledge base about how other technology is supposed to work. This also pretty much confirms that it “fixes” the Red Bugs by banishing some sort of corruption from the fog.

Two new varieties are named this week: indigo (aiiro), which is attracted by some force not explained yet, and pale (usuiro), which still has an unknown function. I really wish Amazon’s translator would just go ahead and translate the color names. 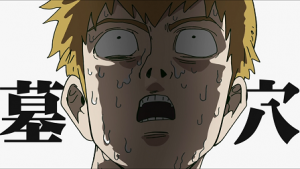 Mob Psycho 100 #6 – Confounding all expectations, Mob has developed an actual life and a circle of friends that his job can now interfere with. Pushed a little too hard by Reigen, he suddenly finds the courage to suggest that they need to spend some time apart. This spurs Reigen to go back to using his own talents more, and possibly puts him on the path to stardom.

As much good as Reigen has done with Mob, this episode reminds us that he is still a manipulative con man. When he discovers Mob has actual friends, his reaction is horror because if he isn’t Mob’s only support system, he doesn’t have as much control of Mob as he thought. And on realizing he’s lost control, his immediate reaction is to grab at the only other lever available and try to use Dimple to bring Mob back into his grasp.

And then there’s the irony of the stark contrast of their lives outside of work. Reigen himself has no social life and is seen by his family as a failure. So he’s going to try to fill that void with TV stardom, which is probably not going to work out well. 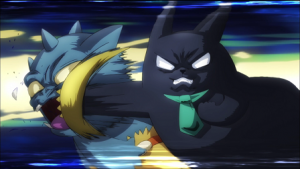 Magical Girl Spec-Ops Asuka #5 – Well, it looks like someone has gone bad. Or been resurrected, possessed, cloned, etc., because the mysterious queen behind the Babel Brigade looks an awful lot like Asuka’s allegedly deceased comrade Francine. Whoever she is, she has enough friends to spread Kurumi and Asuka so thin that M Squad becomes useful for a few seconds.

With the Babel Brigade in retreat, Kurumi gets to demonstrate that her physical healing powers are truly miraculous. But they can’t stop Nozomi’s psychological trauma. The only option she can offer is to erase the memories, and even that carries the price of erasing the good memories along with them.

Seeing what it’s done to Nozomi, Kurumi feels it’s an option worth trying. Nozomi’s father agrees. Asuka agrees. Are we forgetting anyone? Oh yeah, how about asking the actual patient how she feels about having her brain operated on?

That aside, this show is still doing its best to avoid any outright fridging. Nozomi is back to her old self, and she doesn’t even have to be sent away. The people in Foreign Affairs do have a point that she’s probably safer near the magical girls than away from them. And it does provide a handy excuse for the inevitable future plotlines where the badguys happen to keep conveniently showing up nearby. 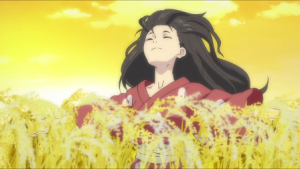 Dororo #6 – As though detailed notes are being kept in a spiritual ledger, Hyakkimaru gets his voice back in exchange for the portion of his leg taken by the latest demon. Killing the demon restores his leg. No storyline about him learning to live with permanent disabilities, then. He just straps on another sword to make up for the temporarily damaged leg and has at it again.

The badassery of his latest victory is overshadowed by the conclusion of Mio’s story and its effect on Hyakkimaru. Contact with demons is leaving him contaminated and liable to turn into one himself. Or something. When Mio’s song is no longer available, a little shouting from Dororo seems to suffice to snap him out of it.

Mio’s plotline ends in a mess of contradictory points. She won, getting her seed rice, except she’s also dead along with all the kids she tried to help. It’s a tragedy, but it’s also totally her fault for going to both camps. She and Hyakkimaru had a good thing going, but then she’s dumped unceremoniously from the plot and will probably never be spoken of again. 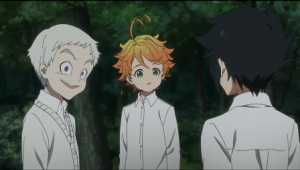 The Promised Neverland #5 – Ray confirms that he’s known what’s really going on for a long time, and he’s been Isabella’s spy for nearly that long. He set Emma and Norman up to discover what was happening to Conny, but he’s been thinking of escape for years. He’s already well ahead of them on the tracking device investigation, and he’s willing to now share his knowledge openly if Norman agrees to doing the escape Ray’s way— discarding the weaker kids so they and Gilda and Don can save themselves.

Norman does agree, and so readily that you know he’s already working on a way to double-cross Ray about it. Which, with everyone being so smart that they’re in each other’s heads all the time, Ray has to suspect, so it feels like half the episode is spent on mere crumbs of plot.

Much better is the scene where Norman and Ray break the news to Emma. Again, the shōnen underpinnings are showing through. The shōnen protagonist is usually not so good at strategy and book learning, but is a natural leader because of their unbreakable spirit and their emotional intelligence. So Emma might not have suspected Ray and may have trouble following Norman’s reasoning, but when Ray explains that he’s been experimenting with disabling the tracking devices, she immediately grasps the human cost that lies behind that statement. And she has the ability to immediately forgive him, but only in the understanding that there will be no more sacrifices. Ray doesn’t have a chance of getting his way.

A Million Reasons Why CyberStorm Is Still Relevant

Exploring the fictional Professor Bernard Quatermass, whose experiments lie (as Rod Serling says) “between the pit of man’s fears, and the summit of his knowledge”! Go get some!

The Golden Amazon, a Pulp Fiction Heroine Who Made Doc Savage Look Like a Wimp