A masterful weaving of the classic mystery and revenge, John M. Whalen’s Tragon of Ramura is a magical swashbuckling story set in a jungle with mythological elements of epic proportions.

For a quick read, Tragon of Ramura is quite a complex tale from the creative mind of John M. Whalen. Noted author of such dark adventures like Vampire Siege at Rio Muerto (2013), Hunting Monsters is My Business (2014 – reviewed here), The Big Showdown (2015 – reviewed here), and This Ray Gun for Hire…and Other Tales (2017 – reviewed here), this latest escapade once again shows the writers ever widening range of character building and wild imagination. Oh, and there’s also that little story titled Where the Space Pirates Are appearing in our April 2014 issued 88th Anniversary edition of Amazing Stories. So yeah, there’s a lot of reasons to be fond of Whalen’s work. 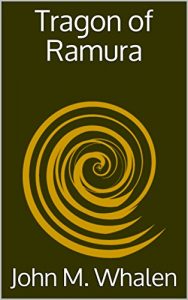 In short, Tragon of Ramura is a magical swashbuckling story set in a jungle with mythological elements of epic proportions. A masterful weaving of the classic mystery and a desire for revenge. It is a sword and sorcery fairy-tale meets Indiana Jones kind of tale with a pinch of a Guardians of the Galaxy type unlikely heroes mixed in. I think you get the picture. It’s John M. Whalen. It’s different.

Tragon and the rest of the crew of the Orion are on the run from the wizardly usurper Caldec’s army. While stopping at a port for supplies, the weary captain stumbles into a bizarre cast of characters who in turn, team up for an unexpected adventure that just might turn their luck – or destroy the world. What could go wrong?

Though many of the characters appear familiar in an archetypical kind of way, a confident yet flawed captain – a loyal first mate – a broken mentor – a skilled mysterious warrior, they are all anything but typical when working together.  And with Whalen’s unique sense of cocky humor sprinkled in amongst all of the action and mayhem, readers will find themselves comfortably attached to our heroes and fully invested in the journey.

John M. Whalen’s stories have a knack for drawing the readers in with surprising twists at every turn and never letting go. Tragon of Ramura does the same thing with a skilled reckless abandon (if that’s a thing), so you better hang on because this fast-paced adventure doesn’t slow down for anybody.

….but you’re older, Shorter of breath and one day closer to death