As a youngster, my fondness for science fiction and the exploration of space began with shows like Lost in Space and Star Trek. But later on, living just outside Detroit in the mid 70’s, our little black and white television picked up (though you had to twist the aerial just right) channel 9 out of Canada. The CBET broadcast of Space: 1999 took my fascination to a whole new level.

This was real stuff here. Our presence on the Moon was still fresh in our young minds. So when a show comes on TV about a moon base, well, how cool is that? Lost in Space was fun because it had kids on it and we felt like we had someone we could relate to. Star Trek was inspiring because it represented a future of fantastic advancements in technology. But Space: 1999 was real. We had just been to the moon, so the possibility of a moon base was inevitable (so we thought, anyway). Heck, I even had the lunchbox!

Here we are almost 40 years later, and the show still leaves a memorable impression on my fandom. Sadly we never built that expected moon base. Sadly we don’t have the large contingent of space explorers except for those few souls manning the space station. Granted the show revolved around a large disaster that occurred on the moon, but at least the science was current and inspirational to many of its fans. When I think of the show, I think of what could have been (minus the tragedies and alien encounters and lost in space stuff). So when I came across the novelization of the television show, I was a kid all over again. 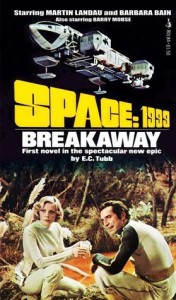 Breakaway by E. C. Tubb is the 1975 novelization of the first episodes of Space: 1999. At only 141 pages, not counting the 16 pages of images from the television show, it was a surprise to find out that the book covers the first four episodes which were originally aired in an odd mix of order. Episode 1, Breakaway first aired September 4, 1975. Episode 2, Matter of life Death aired on November 27, 1975, episode 3, Black Sun aired on November 6, 1975, and episode 4, Ring Around the Moon aired on January 15, 1976.

The book Breakaway begins with John Koenig taking over as the new commander of Moonbase Alpha to help make sure the manned Meta mission succeeds. Meta is a planet-sized object assumed to have broken free from its own primary star and now approaches Earth’s solar system. After signals are detected emitting from the object, it is assumed Meta houses high forms of life and the race to meet our new neighbor begins. But when a mysterious illness jeopardizes the mission, Koenig races against time to prevent any delays and ultimately save Moonbase Alpha.

“Moonbase Alpha is Earth’s supreme achievement. Self-sufficient and fully computerized, the fantastic lunar colony is Earth’s global watchdog, silently guarding against sneak alien attack. The dark side of the moon – once so mysterious, so unattainable – now stores in its womb containers of smoldering radioactive waste, refuse from Earth.”

It turns out that the moon waste dump is the cause of the crew’s sickness. But before it can be contained, the area erupts and the blast hurtles the moon out of Earth’s orbit and on a trajectory out of the solar system. Chapter four ends with the crew of Moonbase Alpha realizing they will never see Earths again. What will come next? Meta?

The rest of the book covers the next three episodes of the television series. Meta turns out to be a dangerous world of antimatter. The crew is then warned by alien intelligence of inevitable doom for all those on the traveling moon because they are on a collision course with a black hole. The book closes with the moon and its inhabitants emerging in an unknown universe after passing through the black hole.

The book has the feel of a rushed plot as so many twists and ideas are thrown at the reader, but the technical explanations and realistic timeline of events makes the story flow with surprising ease. The characters are given just enough back-story to carry their interactions in such high pressure situations while allowing the reader to accept them as believable. This is one of the few fast paced stories where the reader will grow fond of the characters (both good and bad) instantly. In the end, it made me want to find other books in the series.

Breakaway by E. C. Tubb is a nostalgic perspective of a wonderful time in space exploration. Not counting all of the moon-blasting-out-of-orbit kind of stuff, the book is an ideal look into the mindset of those who cheered man’s longing to reach for the stars. Directly on the heels of the space race, 1975 was a time when the moon meant something. For those in fandom, it was a time for wonder and imagination and stories like this only stirred those desires more. Be it books, television, or both, we welcomed the possibilities with open minds…and lunchboxes.