The first book in the new Lost Wonders series, Shackleton’s Folly by Todd Yunker is a fast-paced space adventure that races across a universe teetering on the edge of human existence. 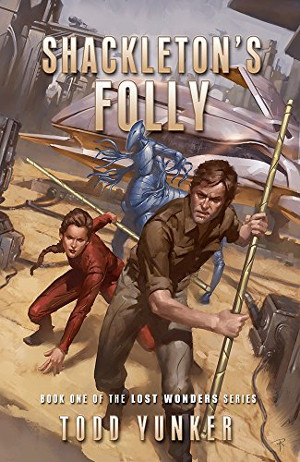 Shackleton’s Folly is a fast-paced space adventure by Todd Yunker. Racing across a universe teetering on the edge of human existence, an unlikely cast of colorful characters is drawn into a galactic mystery spanning generations. Taking the readers in a number of unexpected directions, this ambitious first volume of the future series The Lost Wonders (published in 2015) sets the scene for many more books to come (a prequel novella titled Shackleton’s Burden was published in 2014).

The story’s premise follows our protagonist Ernest “Alec” Shackleton, the captain of the space yacht Quest. A combination Indiana Jones and Malcom Reynolds, Alec’s ever-expanding backstory rests on the continuation of his late father’s search for humanity’s past and questionable existence. Accompanied by a charismatic android named Dancer and a mysterious slave girl named Electra, this little oddball crew races against time and an array of daunting challenges in their “quest” to save humanity.

The word “quest” has a much broader meaning in this story than a mere pursuit of a goal. The author’s obvious nod to the circular hero’s journey popularized by Joseph Campbell’s noted book The Hero with a Thousand Faces is evident at every turn. As archetypical monomyths go, Shackleton’s Folly follows the narrative pattern almost too closely, at times becoming more of a distraction to the overall flow than a subtle tempo builder. Rest assured there are plenty of surprises within the plot to keep fans intrigued, but readers familiar with the theories of Joseph Campbell or those of Carl Jung may lose out on some of the author’s intended shock and awe.

For such a complex storyline, the novel does move along at a fairly quick pace. Though the author tends to break the “show, not tell” rule of writing with an abundant of trivial minutiae which at times can stymie the reader’s starving imagination, the attention to social and political intricacies necessary in believable worldbuilding helped sell the plausibility of such a vast universe.

Being the first book in the The Lost Wonders series, this author shows great potential to pen an epic collection down the road. Shackleton’s Folly is a fun little read that presents plenty of action and leaves the reader with just enough questions in the end to look forward to author Todd Yunker’s the next installment.