Some of the most precious moments in Science Fiction Fandom occurs when new, or more precisely, young readers are introduced to the genre. And at such an impressionable age, its important to get it right. 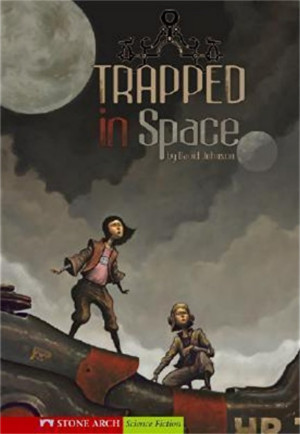 Stone Arch Books (then a Coughlan Publishing company) 2007 US publication (first released in 2003 by UK publisher Evens Brothers Ltd) of the children’s book Trapped in Space by David Johnson (Space Explorers) is a fun read that will inspire young readers to explore many other works available in Science Fiction and hopefully encourage them to continue reading beyond the classroom.

Sammi and Jak are siblings traveling the universe aboard the research vessel Titan with their scientist parents, looking for new worlds where humanity might be able to settle. While taking a trip down to explore one of those planets with possibilities, the jet powered shuttle called a buzzer gets damaged after their reckless pilot flies too low over wild foliage, forcing and emergency landing. Stranded in a strange land, the quandary quickly turns into an invitation for the two kids to go exploring. Each new discovery progresses into another exciting adventure, keeping the story rolling at a comfortably fast pace.

Remaining faithful to the genre, Trapped in Space examines some of the familiar concerns with today’s popular Science Fiction writers such as future technological advances, prime directive debates surrounding alien societies, and the naïve innocence of young characters who blur the line between fear and curiosity. Predictable at times, the story still holds the reader’s attention with a simplistic plot suitable for the focus audience.

Targeted for early readers who are just getting their feet wet in the chapter book arena, there are some suspenseful moments that may startle the younger fans. But each chapter is structured as a mini adventure, so parents of the timid can gradually introduce the story through daily installments, or as nightly bedtime stories.

It should also be pointed out that the sketch styled artwork by illustrator Sonny Liew (The Art of Charlie Chan Hock Chye) is a fine compliment to the story. The black and white imagery adds just enough emotion to the dialog to help young minds visualize the action without taking over the plot or becoming too much of a distraction.

If this book isn’t in every school’s library, it should be. Trapped in Space is a fitting inspiration for space exploration and a fun introduction to the Science Fiction genre for the younger audience. Author David Johnson got it right, and kid will love it.

A diverse collection of works, Last Plane to Heaven by Jay Lake is a fitting tribute for the author who gave us so much raw candor over the years.