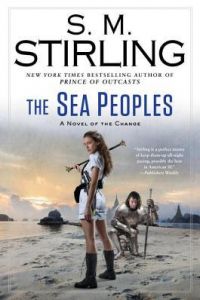 Can you believe that The Sea Peoples by SM Stirling is the fourteenth book in the Emberverse? Geeze, I remember when there were only four Emberverse books and I thought the series was already epic then. Now we are in the double digits and I am not even counting The Change anthology, other short stories printed in different collections or the Nantucket trilogy that the Emberverse was spun off from. Well, let’s take up our sword and shield and charge once more into post-apocalyptic America with this review of The Sea Peoples.

Sea Peoples is set directly after the events of Prince of Outcasts and follows the conflicts happening around Crown Princess Órlaith of Montival and her brother, Prince John. Órlaith has arrived in the Kingdom of Hawaii at the head of the Montival fleet and army setting off with Japanese Empress Reiko to make war against the dark empire of Korea (North Korea did a lot better after the Change than the South did, but at the cost of selling their soul to a malicious entity with no love for humanity). Because of Hawaii’s strategic importance, Órlaith is hoping negotiations with the Hawaiian king will either end with them joining the conflict or else at least allow Montival to use Hawaiian ports to transport soldiers and supplies across the Pacific. Negotiations prove moot, however, when a Korean fleet attacks Pearl Harbor (because irony) and Órlaith sets off to fight a naval battle to drive the invaders away.

Meanwhile, Prince John was successful in taking the Carcosan fort for Baru Denpasar, but in the aftermath his soul is stolen away by the Pallid Mask, the servant of the Yellow Raja. Although his body remains, if John’s friends don’t do something soon, they will lose that too. Thus with the help of the scop Deor Godulfson (who hails from a community of survivors in northern California who used Anglo-Saxon culture as a template when rebuilding in the Changed world) they will track down John’s soul where it is being kept: an alternate version of 1920s New York City that is eerily similar to Robert Chambers’ “The Repairer of Reputations“.

If that last part sounds weird…well it is, but if you are a long-time reader of the Emberverse then you will understand it completely. In fact, The Sea Peoples is a book only for long-time readers of the Emberverse, but then again what more can you expect from a series that is fourteen books long? If you like the Emberverse then you will like Prince of Outcasts. Same likable characters, same excellent world-building and same cornucopia of pop-culture references. That said, if you are new to the Emberverse, DON’T start with The Sea Peoples. While Stirling does make an effort to reintroduce the reader to events and characters from previous books, it’s not enough in my opinion to make it a good starting off point. Either read book one (Dies the Fire) or, if you are not interested in reading thirteen books just to get to one, check out The Golden Princess, which starts the series’ current story arc.

That said, there are still some things in The Sea Peoples that I would like to talk about. First, the Prince John plot was the longer and more-fleshed out storyline in the book. The Órlaith chapters were few and far between and focused mainly on the diplomacy with Hawaii. When the naval battle outside of Pearl Harbor that I mentioned earlier actually happened, it wasn’t until the end of the book and much of the clash was skipped over. This didn’t make this section necessarily bad, in fact I found the ending of it a tad heartbreaking, but I think adding one or two more scenes from the battle might have made it a lot better.

As for Prince John’s dream quest, I loved every moment of it. It embraced the high-concept ideas alternate history is known for and was deliciously dark to boot. It really was like taking a trip through Hell, if Hell was Hildred Castaigne actually becoming Emperor of America and instead of Virgil guiding us it was an Anglo-Saxon scop, an elite horse-soldier, an Australian pirate/princess and her imposing Māori bodyguard. Plus, it expanded the cosmology of the Emberverse.

You see in previous Emberverse books, we learned that the universe has died and been reborn an almost incalculable number of times. With The Sea Peoples, we now learn that some of these previous universes may have been identical to fictional works, like “The Repairer of Reputations”. I found this to be an intriguing idea, since it suggests almost any work of fiction we consume now may have previously been a former reality and the author is only a conduit to record some forgotten, ancient past. It also implies that our currently reality, the one where the Emberverse is just a story, may one day survive only as a handful of books on someone’s bookshelf. Will any of us be important enough to be a protagonist in these stories? Probably not, but it’s still all rather interesting.

That said, this new status quo for the Emberverse does leave me with some concerns. You see, The Sea Peoples is perhaps the most meta of the Emberverse books. At one point Deor even describes what is happening to him and his compatriots by falling back on terms used to describe a story. This isn’t necessarily a bad thing, as there are several popular and well-done works of metafiction out there, but occasionally I found a long-running series will fall back on metafiction when they run out of ideas. Not saying that has happened yet (and the teaser at the end of a great threat coming out of China suggests that there are still more tales left to be told), but anytime an author/creator goes meta it should be handled with great care and not just be a crutch to get out of a writer’s block.

And yet, I still walked away from The Sea Peoples by SM Stirling feeling satisfied. Its incredibly weird and any new reader to the Emberverse will be absolutely lost if they try reading it, but it’s still an excellent fantasy story that grew out of a fascinating post-apocalyptic tale. Definitely worth a read for Emberverse fans.