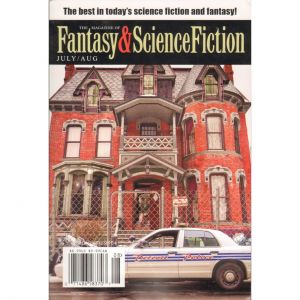 It has been quite some time since I last wrote anything for Amazing Stories, and when I decided to get back to my computer I decided to again start reviewing periodicals, as much of the best work being done in the science fiction, fantasy, and horror genres today is being done in the short form. I had just received the latest issue (July/August 2017) of The Magazine of Fantasy and Science Fiction, so I figured that would be the best place to start.

The first story featured is William Ledbetter’s “In a Wide Sky, Hidden.” It features art as one of its main themes, and sets the stage for a very art-centered edition of F&SF. Following the unnamed narrator’s search for his missing artist sister across the cosmos, it stands as a strong allegory for passion and for following your dreams, no matter how far or what the cost may be.

The next story is “The Masochist’s Assistant” by Writers of the Future winner Auston Habershaw. A medieval fantasy, it tells the story of the titular Georges, who is forever attempting to rise above his station and no longer be the assistant of Hugarth. I found this a uniquely opposite tale to the one before, in that while “In a Wide Sky, Hidden” is all about the beauty and art of life, “The Masochist’s Assistant” tackles the art of death. Hugarth is forever finding new ways to kill himself as a means of ultimately cheating death for good, forcing his young formulus to murder him every morning and keep track of the time. Of course, this could easily be called a science due to their ceaseless experimenting, but the amount of dubious creativity both men employ pursuing their various schemes makes me count it as a tale of he darker aspects of art.

As masochistic as the previous story was, however, the story following it—Robin Furth’s “The Bride in Sea-Green Velvet”—is truly dark. Grave robbery, a mad nobleman, and a desire to create life invoke memories of Frankenstein, while a disgraced abbot’s long-forgotten volume the main character seeks out helps further drive a wedge in the relationship between God and the creation of life. Unlike the classic story, however, Furth replaces Shelley’s science with magic, which adds to the story’s gothic atmosphere perfectly and helps push the story along to its inevitable ending, where, like Frankenstein, Sir Henry must pay the “tithe” for dabbling in things which no human being should ever meddle with.

The feature story—a novella, in this case—is David Erik Nelson’s “There Was a Crooked Man, He Flipped a Crooked House.” I found this one really hitting home for me, as it is set only a couple of hours from where I live in Detroit, Michigan. Again, art takes the stage in this long story, this time being architecture. Two men on the payroll of a devious real-estate investor stumble upon a piece of architectural grandiosity, and along with a young exchange student find that the house not only warps dimensions but houses something monstrous with an almost-silly fetish. The inter-dimensional element of the house and its alien occupant is rather downplayed, with the focus instead on strong characterization. Similar in a way to Georges from “The Masochist’s Assistant,” the main character of this piece, Glenn, is a man in a position below his caliber. He spends his days in the employ of the corrupt Fleischerman, driving around with his mentally-challenged assistant Lenny (another curious literary reminder) flipping houses. Lenny is a carefree, slightly confused sports fan with a great amount of pride for the work that he and Glenn do. Early on Glenn meets Anja, an Icelandic college student, and the three of them become the protagonists as they begin to unravel the mystery of the strange house and avoid stepping too much on the toes of two corrupt police officers, Fleischerman, and one of his rivals. In typical fashion, the good guys win and the bad guys get what they deserve, but it was a pretty easy read and definitely lighter than the one before it.

Legendary science fiction and fantasy editor Gardner Dozois allows the reader to take a bit of a breather after that long novella by offering his tiny “A Dog’s Story.” A very simple story, it lacks the complexity of the previous offerings, which is by no means a harsh critique. It is very hard to go wrong with a three page detective story featuring talking animals as the protagonists setting out to solve—and avenge—the murder of a young woman. That is like an art in and of itself.

“I Am Not I” by G. V. Anderson is yet a third story about a protagonist that has socially and financially been demoted to a level much lower than where she should be, in this case due to birth defects that her snobbish, aristocratic father would not allow in his family. Living in poverty and in desperation, she seeks meager employment at an emporium where an alien collects, processes, pickles and sells “Saps”, later revealed to be human beings, to other aliens. Not a very original work, but entertaining, with characters you cannot help but feel sorry for.

The next piece is an alternate history episode set in a version of the 1800s where the South had won the Civil War and slavery was alive and thriving. Justin C. Key’s “Afiya’s Song” has the title character, a slave woman, singing her once-secret healing ritual that stirs the minds of fellow slaves and leads to an ending that hints at a second Civil War, one with much more familiar end results. Throughout the entire story we are given fictional journal entries from former slaves, sacred rituals and Afiya’s healing song, which highlights a much more human art than any other story in this volume.

“An Obstruction to Delivery” by Sean Adams, according to the biographical bit, was inspired by F&SF switching from paper submissions to a digital submissions process a few years ago. It tells the story of a group of outcast mail carriers, including a disgraced former member who considers the job of a mailman to be an art form all of itself, and holds the profession in the highest regard. Banished to the depths of the city due to the former’s antics, the mailmen find themselves being picked off one by one by an unseen adversary, and in the end only the complex theories and love for mail of this crazed former worker can hope to save them all from destruction.

The last story is a dark fantasy again involving gods and the dead. Marissa Lingen’s “An Unearned Death” is set in a world where Death has forsaken its duties, and the only way for a person to actually die is for a messenger of the gods to come before them and help pick them for the realm of one of many gods. The messenger in this tale, Osrith, meets her match in a stubborn old woman who is reluctant to go, requiring Osrith to use her magic and a little art to summon her benefactor god for some divine intervention. This was my personal favorite of all the stories from this issue, because this one required the most world-building and imagination. Lingen, in just a single short story, has created an entire mythology around her characters, with magic and lore that can easily set up an entire series set in the same universe. The ending has many hints that this might actually be the case, so I look forward to reading future issues to see if a sequel actually comes to pass.

Besides these eight stories readers will also find a poem (“Northwest Cruise” by Sophie M. White), a selection of “Books to Look For” offered by Charles de Lint, a trio of mini book reviews by Michelle West, a film study by David Skal entitled “Ghoulies, Ghosties, and Beasties” in which we learn a bit about the author’s love for Disney (among other things), a science article on bees by Pat Murphy and Paul Doherty with thing and great exposition that would have made the late Isaac Asimov proud, and finally, on the last page, a brief musing by Paul di Filippo about an almost-forgotten spy novel from the early 70s, A Report from Group 17 by Robert C. O’Brien.

After such a long hiatus from Amazing Stories it is good to be back, and I could not have found a better magazine to review for the first time in ages than this one. I just got the newest one in the mail the other day, but if you are able to get a hold of the July/August edition I would definitely give it a read if you are into darker fantasy.

An Interview with Nat Segaloff, Author of A Lit Fuse

John Dodds interviews the makers of The Encyclopedia of Science Fiction, David Langford and John Clute.