Home Interview An Interview with Nat Segaloff, Author of A Lit Fuse

Nat Segaloff is a former Boston movie publicist and film critic (not at the same time) who veered into writing books and producing TV documentaries when he moved to Los Angeles and started making Hollywood contacts. He has written biographies of filmmakers William Friedkin, Arthur Penn, John Milius, and Paul Mazursky; writers Stirling Silliphant and Walon Green; and A&E “Biography”s on Stan Lee, Larry King, John Belushi, and Shari Lewis & Lamb Chop. He was drawn into the world of science fiction in 1996 by John de Lancie and Leonard Nimoy with whom he formed the Alien Voices production company to create dramatized audiobooks of classic SF novels performed by all-Star Trek casts. His latest book is A Lit Fuse: The Provocative Life of Harlan Ellison (from NESFA Press).

A Lit Fuse by Nat Segaloff
~ An unguarded, uncensored, unquiet tour of the life of Harlan Ellison ~

Amazing Stories Magazine (ASM): Why Harlan? What is it about this man that inspired you to tell his story?

Nat Segaloff (NS):  Harlan and I have been friends since I interviewed him in 1995 for my Stan Lee documentary. Naturally, I had been reading him for years, but there’s nothing like a one-on-one encounter with videotape rolling to test one’s mettle. It will surprise no one to hear that, in our interview, Harlan was quotable, funny, provocative, and honest, but he was also compassionate, helpful, and caring. We kept in touch over the years. He acted for me in a staged reading of “The Waldorf Conference,” a play about the origins of the Blacklist that I co-wrote with Daniel M. Kimmel and Arnie Reisman. We hung out. After I published my biography of Arthur Penn in 2010, Harlan asked me if I’d be interested in writing his. Considering that he had been promising to do one himself for 25 years (on top of his celebrated story introductions), I said “yes.” He asked me in his kitchen. I already knew what made him tick, but I was bound and determined to find out what made him tock.

ASM:  There is no question that some people would label Harlan Ellison a contentious character, and yet here’s this biography of him that is packed with all of the warts, hairs, and patches of sunshine that some people couldn’t imagine Harlan agreeing to have revealed. Why do you think he agreed to this reflection of his life with all of its necessary imperfections?

NS:  The glib answer is that Harlan demands the truth at whatever the cost, even to himself. He says he is always honest (although many people I spoke to cautioned me that he wasn’t) and argues that, if he never lies about himself, no one can ever find anything to hold against him. Going in, of course, I wanted full control and got it. Along the way he knew where I was going because of my questions. I am pleased that no one has yet accused me of writing a hagiography. The only one who would be more opposed to that than I am would be Harlan.

ASM:  When pulling together A Lit Fuse, what were some of the special challenges that you faced with this biography? How did you get around them? 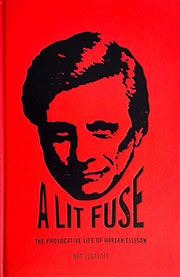 NS:  The challenges in writing A Lit Fuse were both expected and unexpected. Those I expected – getting permission to quote from Harlan’s fiercely protected works, use of photos, getting his friends to talk about him – turned out not to be a problem. The thing I thought would be easy – getting his enemies to talk about him – was difficult. While I didn’t want to rehash feuds that had already been covered within the SF community, I needed details to untangle fact from legend. Some people refused to talk and others didn’t respond at all. I must say this, though: even those who refused were unfailingly polite.

The other challenge was format. Harlan has done so much in his life that it was hard to find a timeline that would present it coherently. I settled on following chronology until he became a professional writer, then I branched off into thematic chapters.

ASM:  Is there a quotation, a line from the biography, or from Harlan himself that encapsulates this biography for you?

NS:  I borrowed a phrase from Harlan and used it as the inscription in the copy I signed to him. He wrote that writers take tours in other people’s lives. I told him thanks for letting me take a tour in his.

ASM:  You have a number of different projects and books under your belt. What is it about writing a biography that you most enjoy?

NS:  I like to write about the creative process. That’s why I prefer living people who are still creating. I ask questions that the popular press doesn’t care about. I’m not interested in the first time somebody got laid. I want to know the first time they got paid.

ASM:  In the editing process, there are always pages left on the cutting room floor. Were there any stories or sections that you wish you could have included, but didn’t?

NS:  No. This is the book I wanted to write. The editing process with David Grubbs and other knowledgeable people at NESFA Press kept the book focused.

ASM:  How long did it take you to complete this book? And what types of things did you need to do to prepare for this project?

NS:  The book took six years and shouldn’t have. Researching and writing it were the easy parts. The hard part was finding the right publisher. I am more than pleased with NESFA Press, but it took a long time (and an introduction from Dan Kimmel) to bring us together. My book agent and I got I-don’t-know-how-many rejections from so-called mainstream publishers. More than anything, this proved to me the disrespect in which science fiction and fantasy are still held by people who control the publishing business – unless it’s about zombies and vampires. 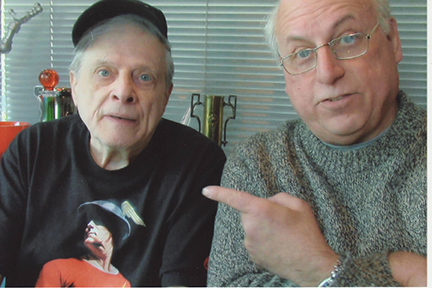 ASM:  You knew Harlan well before taking on this project. What advice do you have for someone who may be in your shoes and who may be thinking about writing a biography of someone they know well?

NS:  In a word, don’t – unless you have as fearless a subject and friend as Harlan. On the whole, I don’t recommend writing about a friend – if you want to keep the friendship intact, that is.

ASM:  While Harlan Ellison is a well-known figure in many areas, there are still a lot of people who are unfamiliar with him, especially younger people. What answer would you give to them when they ask, “Why should I know about Harlan Ellison?” 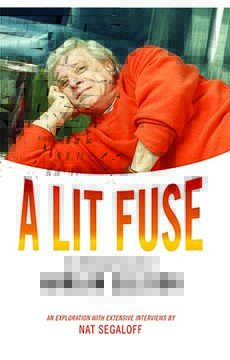 NS:  That’s the precise question I am having to answer as I seek reviews, interviews, and publicity for the book. While Harlan is known within the science fiction and speculative fiction community, he no longer has the public profile he enjoyed in previous decades. I tell people that he has won every award for his writing, often more than once; that he personally broke the bonds of tradition in science fiction with Dangerous Visions and Again, Dangerous Visions anthologies; that he wrote innovative media criticism at a time when nobody else dared call television on the carpet; that he won a landmark lawsuit against America Online that guards the rights of writers from Internet piracy; and, finally, on top of all that, he’s a hot shit.

ASM:  Okay, I just have to ask because of Harlan’s deep connection to Star Trek, what’s your favorite episode? And what do you think of the new Star Trek series that is set to launch?

NS:  If I said anything other than “The City on the Edge of Forever” from TOS I’m sure somebody would send me a red jersey and say “wear it in good health.” As for the new Star Trek series, I have had the pleasure of working with so many people from past series that it would be like leaving a gourmet banquet table to see who’s visiting the neighbors. I hope it does well but I don’t have the interest.

Nat Segaloff is the NESFA Press Guest at Boskone 55 in Boston, MA (February 16-18, 2018) where he will be signing and doing a special guest interview. A Lit Fuse will also be featured in the special Book Party on Saturday, February 17th.  www.boskone.org