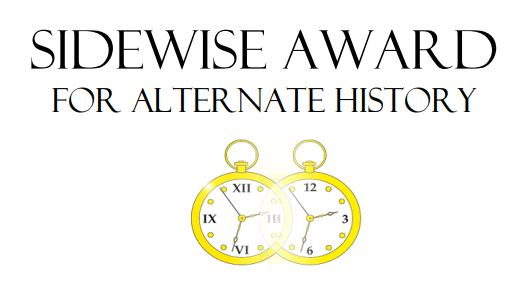 The Sidewise Awards for Alternate History were conceived in late 1995 to honor the best “genre” publications of the year. The award takes its name from Murray Leinster’s 1934 short story “Sidewise in Time,” which explores a world in which a strange storm allows people to travel between alternate worlds.  The first Sidewise Awards were announced in Summer 1996 at L.A.Con III. In 2019, the jury members for the award were Karen Hellekson, Matt Mitrovich, Jim Rittenhouse, Kurt Sidaway, and Steven H Silver.

Each year, two awards are given. The Best Long Form Award will be presented to the best novel or complete series. The Best Short Form Award will be given to the best work under 60,000 words. In addition, at the discretion of the judges, a Special Achievement Award may be presented for a significant body of work or a specific novel or story which was published prior to the inception of the award. A complete list of past winners may be found at http://www.uchronia.net/sidewise/. This year’s awards are being announced on-line on October 15. This year’s Special Achievement Award, announced now, will be presented at Windycon 2019 in Lombard, Illinois on November 15.

In 2000, Eric Flint published the novel 1632. Following the publication of the novel, Flint has encouraged an extensive on-line community to expand on his vision and explore the ramifications of alternate history through discussion and publication of fiction and non-fiction that builds off his original work, resulting in dozens of stories and novels and helping to launch the careers of many authors.

For more information about the Sidewise Award, please see http://www.uchronia.net/sidewise/ or contact Steven H Silver at or 847-363-1546.

SPACE: Three Black Holes Are About to Collide