Home Review Review: The Yes-Men of Venus by Ron Goulart

The Yes-Men of Venus is a short story by Ron Goulart that originally appeared in the July 1963 (Volume 37, No. 7) issue of Amazing Stories (Ziff-Davis Publishing). If you’re not familiar with Goulart’s work, my review of his book Capricorn One was posted here almost a year ago and Dave Kilman wrote a great piece about the author in his “Scide Splitters” series back in 2015. 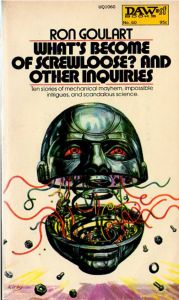 The version of The Yes-Men of Venus reviewed here is from the 1971 collection What’s Become of Screwloose? And Other Inquiries from Daw books. As the title implies (“What’s Become of Screwloose?” Is also the title of the first story in the collection), Goulart is not afraid to nudge the funny-bone. The book is also subtitled as “Ten stories of mechanical mayhem, impossible intrigues, and scandalous science.”

The Yes-Men of Venus is not an easy tale to categorize when contemplating an overall theme as it seems to go all over the place. Part of what is said to be the science fiction narration of the late author Arthur Write Beemis, the story begins with the feel of steampunk as our first person narrator/hero finds himself descending in a deflating atomic powered Zeppelin over the Pacific Ocean. After surviving the plunge and making it to shore, he awakens to the face of Lowell Hawthorne.

Hawthorne is our second hero who proceeds to (also in first person) tell hero number one that he is the latest of multiple reincarnations, having first appeared as an Egyptian priest. The eccentric Hawthorne continues with a backstory of having been teleported to the planet Mars where he befriends a group of “tall” green men. After killing a green man in an attempt to save a Martian maiden, he eventually becomes imprisoned in a cell, awaiting his turn to fight as a gladiator in the Great Games. This is where Hawthorne meets his cellmate Joel Lars who in turn tells him that the woman he loves is being held captive “inside” the planet Venus by – wait for it – The Yes-Men of Venus.

Here, the reader is informed that “what transpired next would fill a book itself,” and the story quickly closes. Today, this type of ending might bring a sense of irritation as the reader is left hanging, needing more. But if you can appreciate the story as a second or third hand account, this type of vague closure does provide a convenient avenue for authenticity to an otherwise crazy tale.

From a nostalgic perspective, each narrator’s individual obsession with his masculinity and Goulart’s necessity to point this out to the reader is quite amusing. A time-stamp on the social climate of the period, this type of prose is dated and would be considered offensive in modern literature.

With apparent nods to greats like Jules Verne and Edgar Rice Burroughs, the story becomes a roller-coaster ride as the reader tries to keep up. Goulart obviously doesn’t shy away from silliness, over-the-top ideas, and simply having a little fun at the reader’s expense. But that’s okay.

Included in the collection, readers will find:

Keeping an Eye on Janey (Infinity One, !970, Lancer Books)

Whimsically convoluted, The Yes-Men of Venus was a fun read and a good inspiration for returning in future posts to take a look at some of the other stories by Ron Goulart.