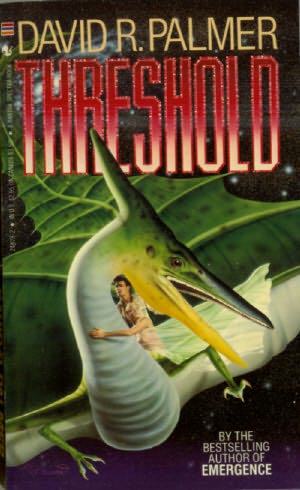 Hello again, and welcome back!

And it was a much better book.

Threshold opens with lines that pay homage to the classics of the pulps – Flash Gordon, Tom Corbett – clever enough. Then it begins to jump around. You get a dose of the present – a blue-white flash, an explosion, and the revealing of a woman who is described as “Tinker Bell” (yes, the Disney character) and a ridiculously obese cat.

Cut to a third party – an observer, reporting on the arrival of their “team”. So obviously there is Something Going On here, and rather than allow the reader to discover this fact on our own we have the fact of it presented to us.

Back to the present (and did I mention that the novel is largely written from the first person? No?) and a description of Tinker Bell. Now our protagonist lapses into shock and rage and is thinking all sorts of thoughts – and then the cat talks.

Rather than an explanation, it’s time for – you guessed it! – backstory! Peter (for that is his name) has to have SOME kind of backstory. And now is the perfect time for it, right? Two pages of it. Turns out he’s a multibillionaire workaholic who runs some sort of unspecified company who is off on a vacation.

Then back to the present, and the beginnings of an explanation of the actions so far.

It’s not that the plot is confusing.

It’s actually straightforward. World in peril, and they need a human to help them. Turns out, witches and familiars and demons – or wWhy’j, fmMl’hr, and Daa’mn – are just the twisted human racial memories of another world, another place.

As I said, it’s not confusing. More like, it’s so trite, so much a cliché, that reading it becomes tiresome.

And I’m sorry, but a tribute to pulp plots coated with a veneer of witchcraft just doesn’t cut it.

The writing itself is easy to read, and has a fair smattering of clever repartee and wit. But wit without a readable plot is most unfortunate.

This was supposed to be the first book in a trilogy; it appears to have been abandoned, as this novel appeared in 1985.

Moving forward I welcome your comments and suggestions! If there is a book YOU want me to review, drop me a line! You can find me on Facebook (very creatively, Adam Gaffen) or you can send an email to OR you can simply leave a comment here!

If you like your humour dipped in acid, these books will definitely be for you