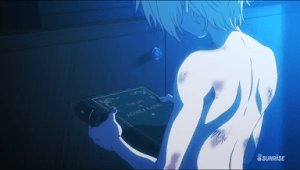 Mobile Suit Gundam: Iron-Blooded Orphans #43 – With all the plot threads caught up to the coup in progress, it’s time for McGillis Fareed to show his hand, and wow, this episode did not disappoint. Fareed’s plan is to induce chaos and then present himself as the only person strong enough to hold things together. And why is he so obsessed with strength?

It’s not a huge surprise that he comes from the same street kid background as much of the rest of the cast, but it turns out his lucky breaks weren’t that much of a gift. Going to an exclusive academy didn’t reduce the level of violence in his life much. And being adopted as Iznario Fareed’s heir… came with a massive side of molestation.

Since Iron-Blooded Orphans has been determined to explore every bad thing that can happen to kids, you could guess this was coming sometime, although I would have guessed it would happen with Almiria (and it still might, looking at the teaser for next time). But yeah, this definitely works as an explanation for why Fareed trusts no one and wants to dominate everything.

But there’s a second revelation: people who have merged with their battlesuits cybernetically can have their personalities recorded to live on in a Gundam frame, and work in concert with a living human. Like Ein, and, as it turns out, like the famed Agnika Kaieru. The result is much like the Alaya-Vijnana system… or, perhaps, exactly the same thing as the Alaya-Vijnana system. Perhaps Mikazuki hasn’t been speaking metaphorically all this time when he talks about Barbatos like it has its own personality. Perhaps what underlies the elites’ prejudice against cybernetic enhancement isn’t the fear of corrupting bodies, but souls. 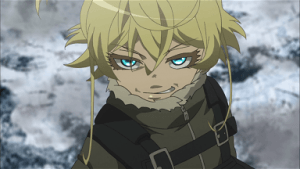 Saga of Tanya the Evil #6 – The attention of the Fatherland now turns to the northern front, where it has annexed alternate fantasy Denmark (which is, in the words of my military history expert, “about as defensible as a well bottom”) but is stalled with only a bare handhold on the Scandinavian Peninsula. The general staff concludes that this is due to the other major powers surreptitiously helping the Norden Confederation. Zettour is starting to take Tanya’s prediction of a world war seriously, but they seem to already be in one and just now realizing it.

So Tanya is ordered to take her battalion and go kick some Nordic butt, which she does with her usual combination of extreme motivation and total magical overkill. She is seriously in a groove now, and seems to have forgotten about the plan for a nice comfy spot well behind the lines. On the other hand, her paranoia about the Supreme Being now has her suspecting its hand in every development. That may take her down before any enemy can.

It’s a nice touch to show that the limitations of mages still means there’s room for air power in this war. Mages have the advantage of flexibility and maneuverability, but aircraft don’t get tired and can operate at higher altitudes (I guess it takes more magical energy the higher you get, so everyone’s limited by the throughput of their magic stones). At least until someone as horrifyingly overpowered as Tanya shows up. 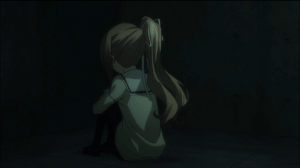 CHAOS;CHILD #6 – Barrelling onward with the explanations, Chaos;Child explains that several characters are “gigalomaniacs”, which I guess are a thousand times better than megalomaniacs because their delusions come true. Getting to that point takes the biggest pile of dubious quantum-mechanical handwaving I’ve encountered in a while, but anyway, the point is that gigalomaniacs have traditional psychic powers and can manifest really cool-looking hand weapons when they fight.

This brings up a possible alternate explanation for the traditional horror-style vanishing of the entire basement asylum. Normally it would turn out that the people in charge have preternatural powers of logistics that allow them to spirit away an entire facility and set it up again somewhere else in mere hours. But could most or all of it have been a delusion of Uki’s, projected into the real world?

Given the high level of interconnectedness between all the characters, it’s a good guess that the clinic Uki was going to be driven to is the same one Takuru lives at. Which means his adoptive father probably knows more than he’s been letting on about the whole situation, and all the kids there are suspected gigalomaniacs.

Does this get anyone closer to a solution for the murders, though? And what’s the connection with the burst of light six years ago? And what is the deal with Arimura’s hair ribbons changing back and forth all the time when everyone else’s costume is static? 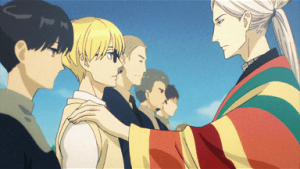 ACCA: 13-Territory Inspection Dept. #6 – Jean’s audit schedule now takes him to the canyonlands of Rokkusu… well, accounting for Japanese pronunciation, it’s the district of Rocks. And the breadbasket of Fāmasu is really Farmers. Not quite so effective when it’s your language being mined for random exotic-sounding words, is it, native English speakers?

Rocks is where Jean and Lotta’s parents died, and where Grossular seemed to take particular notice of Jean among the relatives of the victims. It’s reminiscent of everyone staring at Jean when he was last at the capital. I’m still going with the extra heir theory, and you know, he does bear a striking resemblance to Prince Schwan if you look past the hair.

Yet, whatever Grossular saw, he didn’t know about the surveillance Jean was already under. (Recall that it was established a couple episodes ago that Jean is at least 30, making him at least 17 at the time of the accident, putting it at least two years after Nino became his buddy in high school.) If one of the five big cheeses of ACCA didn’t know about it, then it had to have come from above them. So the king, or someone in the royal household staff? With a trip to Dōwā coming up next, we’ll hopefully find out.

Hell Bound on All Hallow’s Eve!