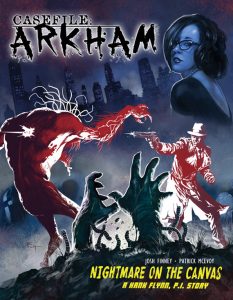 Casefile: ARKHAM – Nightmare on the Canvas is the dark, mesmerizing graphic novel that fandom has needed for a long time. A fresh new series of what promises to be a staple in the noir fan’s library behind a strong voice in both a literary and an artistic sense, this is quite a promising first issue.

By presenting the combined writing skills of Josh I. Finney (World War Kaiju, Titanium Rain, Utopiates) and the artistic abilities of Patrick McEvoy (Arkham Horror, Call of Cthulhu, Game of Thrones), 01 Publishing (with the efforts of editor Kat Rocha) has brought back the theatrical freshness of those classic radio murder mysteries and added some darker elements of modern horror to create a memorable story that could be just as comfortable on the big screen. Hollywood, take note.

Set in the late 40’s, war veteran and current private investigator Hank Flynn is hired by the glamorous socialite Derlith to investigate a missing person. Renowned artist Pickman has disappeared, (note the clever “canvas” reference in the title) and the horrors of war are quickly overshadowed by the terrifying monsters and black magic Flynn encounters as he tries to solve the mystery.

The characters are reminiscent of a pulp classic detective story, straight out of a Mickey Spillane dime novel. Yet, they are different, original, and in a way, they are all a mystery within a mystery. The familiar archetype is what draws the reader in, but it is the darker, shakier background we gradually see that makes us want more. Need more.

The black and white imagery works in two ways. The lack of color allows readers (old enough to remember the cinematic gumshoe images) to appreciate the harsh side of the social transition that took place at the end of the war. But the dark imagery also lends a hand to the horrific monsters who live in this world. Color would have made it somewhat campy. The vivid imagery on the color intensive cover does have a side-show cheapness about it, but if you take in the similarities to those old movie posters, it makes a lot of sense. This in turn sets the stage for the welcoming darker artwork on the pages inside, and it all falls into place. 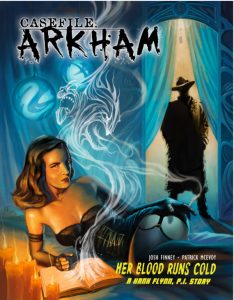 Casefile: ARKHAM – Nightmare on the Canvas has evolved from what started as a H.P. Lovecraft influenced Kickstarter project and gradually blossomed into a fine piece of literary work from the growing stables of 01 Publishing. Stay tuned, because the publisher promises another darkly twisted Hank Flynn P.I. installment coming out in 2017 with Casefile: ARKHAM – Her Blood Runs Cold.

World War Z should really be called ‘The Movie About Globetrotting Around a Zombie-Infested Planet’ as it has little to do with the beloved Max Brooks novel. In fact, the best thing about the matinee performance I went to on Saturday, was a trailer for the BBC series Luther. Oh and one tine plot point towards […]

Over four decades Pat Mills has been a major force in keeping the British comics industry alive. I caught up with him to chat about the reappearance of one of his most enduringly popular characters, the Celtic barbarian, Sláine.