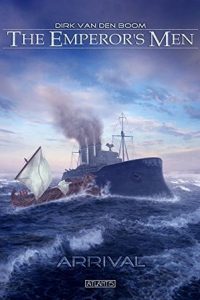 So a couple weeks ago I published a short essay regarding a little-known time travel trope involving ocean-going vessels being hurled through time. I was inspired to write about said trope while reading Dirk van den Boom’s The Emperor’s Men: Arrival. Now that I have finally finished reading the book I can share my thoughts on it with all of you.

Arrival is the first book in The Emperor’s Men series. It follows the crew of a fictional Bremen-class cruiser, Saarbrücken, travelling to German Cameroon on a mission to transport a unit of infantry on the eve of the Great War. A freak fog off the coast of Portugal knocks the entire crew unconscious and when they awake, they find themselves in the Adriatic Sea close to Ravenna, Italy…1,500 years in the past.

After an initial misunderstanding that led to a Roman trireme ramming a steel ship (and failing miserably) the Saarbrücken‘s first officer (now captain after the unexpected death of the captain during the aforementioned run-in with the Roman navy) decides the crew’s best hope is to offer their service to Emperor Gratian and, along with their technical know how, save the Roman Empire. They need to hurry, too, because they arrived just before the Battle of Adrianople, which historians consider the beginning of the end of the united Roman Empire.

Arrival was an enjoyable read…but it has issues. On one hand, I though Dirk did a good job on the historical details with both the 1914-era Germans and the 4th century Romans. I liked how he spent time discussing how people dressed, how they prepared their food and even how they went to the bathroom (which is something most books leave out, but hey, there is history behind the toilet even if you don’t want to think about it). Additionally, while Arrival falls squarely into the time travelling ship trope, I still thought Dirk did a good job by using the trope in a setting that not many alternate historians go to (in fact Uchronia lists Dirk’s series as the only alternate history that diverges in 378).

Then we get into some of the problems. Some of the characters were well-developed, although there were a fair few who were two-dimensional, like the aristocratic second officer who acts like any noble who is meant to be the antagonist and has the depth of straw man. There is also the inevitable up-timer/down-timer romance which, in my humble opinion, happened faster then a Disney fairy tale. Also, Arrival was originally written in German and the copy I am reading was translated into English by the publisher, Atlantis. Although completely readable, there are a lot of grammar errors and poor word choices, which do remind you that this was not the original language the story was written in.

Then there is the issue that bothered me the most: the ending. For one thing, there is a lot of build up in Arrival of how important it is for the ship’s captain to meet with Emperor Gratian so that he can warn him about the future and offer his ship’s help in preventing it. So many chapters are dedicated to stressing just how important this meeting is that you would think the book would at least show us this meeting before it ended…but we never see it. Instead we get a cliffhanger where the victorious Gothic leaders are discussing what to do next with their prize…the imprisoned (and very much alive) Emperor Valens.

Now Valens, for those who don’t know, ruled the Eastern Roman Empire as a co-emperor with Gratian. History tells us that Valens died at the Battle of Adrianople…but to be fair there is some debate about how he died, since a body was never recovered. Dirk goes with the theory that Valens actually escaped the battle before being cornered in a hut that was set aflame by rampaging Goths. Nevertheless, in this timeline, Valens managed to escape death again, only to be captured by the Goths.

What this will mean for the rest of the series is unknown and to be honest it is a nice twist. In fact if it happened along with the payoff of the meeting with the Emperor I would have no qualms about the ending, but I didn’t get that. Instead Arrival gives us a lot of build up, but no real ending. Yes, I know there are more books coming, but even if it had been an entry in a long-running series, it should still have a beginning, middle and end. I feel like I was given a good beginning and decent middle, but the end just wasn’t there.

On the whole, The Emperor’s Men: Arrival by Dirk van den Boom gives us a good concept, but it fails somewhat in the execution. Some issues, like a better translator, would do wonders, but others like character development and the ending probably are too late fix. Still if you like time travelers mucking with history to save themselves and civilization, then you might enjoy Arrival…but you might want to read some other stories in the same vein first to see if you like it.