A review of the sequel to Ancillary Justice. 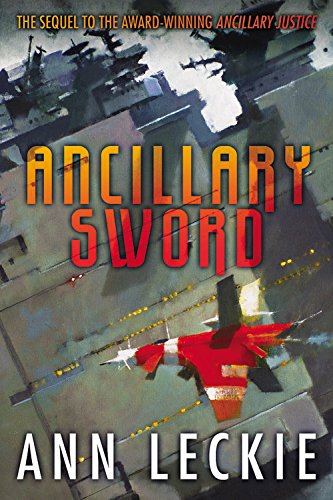 Ancillary Sword was a much quicker and easier read for me.  This was of course due to having become familiar with much of the background (the final chapters of Justice do wrap things up quite well;  I urge anyone experiencing the difficulties I encountered to persevere – you will be rewarded in the end);  Ann did not have to try and cram The Rise and Fall of the Roman Empire into an SF tale of unrequited love and robots this time around;  but Ancillary Sword is also much closer to a traditional SF space opera yarn than Ancillary Justice was.

Breq is now a largely fully-formed individual; the conflict that led to the destruction of Justice of Toren has been unveiled (the multi-minded Anaander Mianaaai has been revealed to have split into at least two warring factions), one which forced Justice of Toren’s ancillary to assassinate a favored crew member, one which offers Breq support and an opportunity to claim revenge;  one which may be under the influence/sway of the alien Presgr.

The split among the Mianaai’s has created a situation in which both Breq and Mianaai see mutual benefit in working together; Breq is made captain of a Mercy ship (there are at least three ginormous ships in the Ancillary universe – Swords, powerful attack ships, Justices, gigantic troopships and Mercys, small and fast and probably combining the multiple functions of scout, hospital, educational and ambassadorial) Mercy of Kalr and sent to a strategically located system – to continue her quest, to hold down the fort for the ‘good’ Mianaai, and, one gets hints, perhaps being placed in harm’s way so that Mianaai can be rid of a being/creature/Raadchi that has become not only a problem in lots of small ways, but also an unwelcome moral compass on her previously unlimited powers.

Leckie has cleverly set up a situation in which we watch Breq, who lost demi-god like powers when the AI ship she used to be was destroyed (by one or another Mianaai faction) acquire new capabilities and understandings while we watch Anaander Mianaai lose many of her connections and certainly her omniscience.  Curiously, both retain what mere mortals might describe as god-like powers.

The strength of Ancillary Sword is found in its multiple themes and in the layering of those themes:  it is all at once a series of nested mystery stories, unrequited love story; loss and redemption, fall of empire and a deep examination of what it means to be human.

Unraveling the  “how many Mianaais…which Mianaai?; the loyalty of the system Breq and Mercy of Kalr are sent to (as Mianaai splits, the FTL gates are seized and/or destroyed by one faction or another.  Mercy of Kalr is sent to Athoek system to secure it against future loss);  the origin and loyalty of newly appointed Mercy of Kalr lieutenants; the motivations and loyalties of a host of important political figures ranging from the governor of the system to the captain of the other major ship in the system to the members of influential families in the system, to the various races (all human) inhabiting the system.

We learned in Ancillary Justice that many of the systems annexed by the Raadch are divided societies with an upper class and a lower class; the upper classes are usually (but supposedly not always) those peoples who were at the top of the system’s hierarchy prior to annexation and that it was convenient for the Raadch to preserve this dynamic.

What we also learn is that oppression and discrimination (often expressed by denial of access to opportunities to rise through the economic structure of the Raadch – a system of patronage) are common.  The Raadch layers control, the high justice, cultural norms and a faux sense of fairness and equality (all people living under the Raadch are equal, but the more Raadch you are, the more equal you are) upon the systems it annexes.  It does not seek to address their problems – or even recognize that there are problems.  Instead of using its power to create a truly equitable society, it uses its power like a rug to cover up and smother those problems.

The relationship between the Raadch and the systems it conquers could be viewed as a metaphor for the manner in which anglophone science fiction has dominated the literature for decades.  What Breq discovers is that if you engage the oppressed you can uncover a whole new truth.

It is a truly Gordian Knot of political intrigue, appropriately Byzantine in its revelations.  In Ancillary Justice, Breq learned that there is power to be found in working with the oppressed;  there are truths to be found not voiced by the complacent.

Breq continues to use this political trick – giving a voice to the marginalized – to great effect.  She has new found power as a Fleet Commander, putting her at the apex of the political structure of Athoek system (the Raadch apparently builds a ‘station’ in conquered systems, an enormous space structure also inhabited by an AI), both aboard Athoek station and on the inhabitable planet in that system.  Both habitations are divided culturally.

And then there’s the Presgr and the “Ghost Gate”  The ghost gate is an FTL gate that leads nowhere, although sometimes things come out of it.  Ancient things.  And the Presgr may or may not have suborned one of the Mianaais – which may or may not be the reason why the Raadch is splitting.

Breq continues to grow in her understanding of human foibles;  she retains the ability to interface directly with her ship’s AI, allowing her a degree of omniscience that is carefully limited by Leckie (god as character would know and anticipate everything…);  Breq can still only guess speculate on the internal motivations of individuals and is physically limited to her one body.  The more she comes to understand the reasons behind various forms of rebellion within the system, the more she comes to understand the people behind them – and the more her desire to overthrow the oppression of all of the Mianaas grows.

Ancillary Sword does not suffer from series middle-book-itis;  your read will be informed more deeply if you precede it with Ancillary Justice, but this is not necessary at all; the continuing thread of the Raadch’s civil war is large enough in scope, and the quest in that previous novel has been sufficiently resolved that Sword is able to move forward largely unencumbered.

Ancillary Sword will be in book stores today.

An interview with the author of “Tomorrow we will cross the Ganges”, Ekaitz Ortega