Frank Wu is a science fiction artist and writer living physically near Boston, but mentally in various diverse realms in time and space. Most recently, his spaceships appeared in the videogame “Revolution 60,” produced by Giant Spacekat. Before that, his artwork graced the covers of books by Cory Doctorow, Jerry Oltion, Jay Lake and others. His magazine work has appeared in Amazing Stories, Fantastic stories, Strange Horizons and Realms of Fantasy. He is noted for his giant space chicken and dinosaurs playing guitar. His favorite words are “tentacular” and “stigmergy.”

But that’s all in the past. His future plans include more crazy animated films and insane stories about ants building a space elevator.
And maybe zombie dinosaurs.

Duncan Long for Amazing Stories: Cory Doctorow once described your work as “cheerfully demented.” Why was that?

Frank Wu: Maybe because I do things like time-travelling dinosaurs playing guitar? 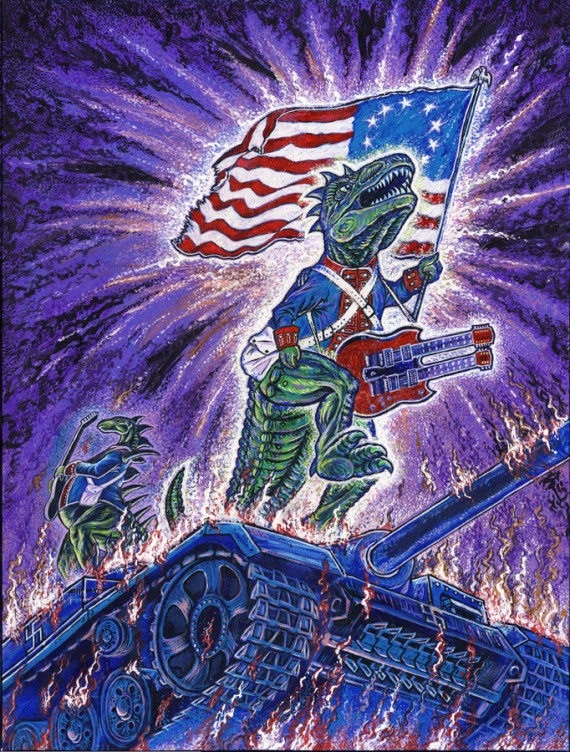 The dinosaurs go back to the American Revolution, but their scientist friends send them food so they won’t eat George Washington. And clothes, so they can “blend in.” But they don’t get the package until after they’ve left and gone to fight Nazis. Which is why the dinosaurs are wearing American Revolutionary costumes while playing guitar, standing on a German tank destroyer, like Audie Murphy. You see, it all makes sense.

AS: You certainly have an eye for the bizarre.

FW: And check out this Zombie Lincoln. 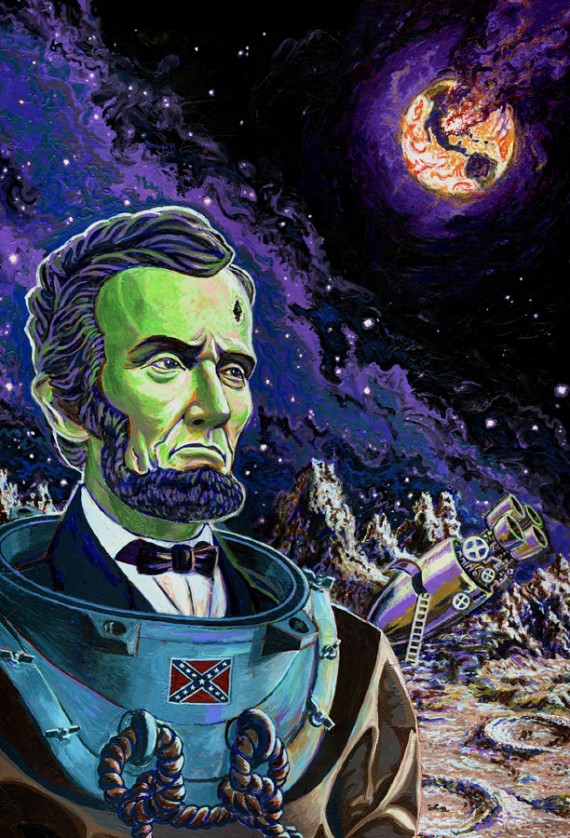 I did this as a collaboration with the late great Jay Lake. We were guests of honor at a convention and we were throwing around ideas. And I said, what if we did Lincoln on the Moon? And Jay said, yeah, sure, as long as he’s a zombie. And the South wins the civil war. Thus we see Lincoln in exile – sort of a Seleno Elba, and world is just burning, burning.

AS: Where do these ideas come from?

FW: Jay once told me I had a “gonzo” sensibility. I like to find the intersection between two seemingly-unrelated ideas. The trick is to pick a pair that click and then do the hard work to bring it life. Like Cathulhu. 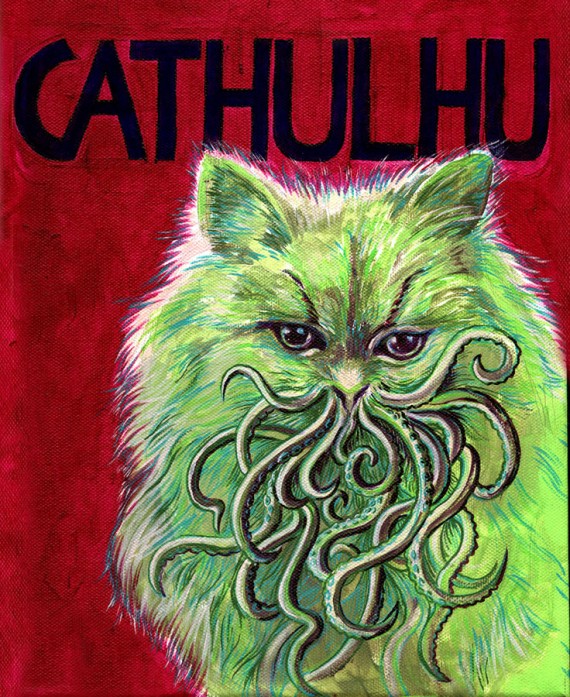 FW: It took a while to find the right cat, who could be made grumpy and tentacular.

AS: How did you become interested in illustration and art?

FW: Like a lot of people, through Star Trek. TOS, actually. The first thing I saw on a color TV was “The Doomsday Machine” with that giant maw that could swallow a dozen starships. Star Trek, especially the third season when it got really psychedelic, really warped my sense of color. I also had a steady diet of Captain Nemo and the Underwater City, Lost in Space, and Seventh Voyage of Sinbad.

So I studied a lot of art and read stuff, too. As far as artists go, my inspirations were the obvious greats of the field: Frank Kelly Freas and Frazetta and Paul and Brown. But I also studied non-genre artists. I love the Italian Futurists like Boccioni and Russian Constructivists. I’m still learning, and exploring the works of Calatrava and Lebbeus Woods.

But my biggest inspiration didn’t come from science fiction, or even art.

AS: Let me guess. A book or a story. Asimov? Heinlein?

FW: Good guesses, but no. I read a lot about the history of rock and roll – back when music still mattered. And Pete Townshend of the Who once said, “You should keep on playing rock for as long as you have an axe to grind, and if you haven’t got an axe to grind, you should go into cabaret.” And so it’s no coincidence that the greatest music of all time was created in 1965 to 1975, years which overlapped the Viet Nam war. Protests in the street. People were fighting for civil rights, for women’s rights, for peace and justice. Music and art mattered then.

AS: So you think that music and art can change the world?

FW: It’s a question I think about all the time. A lot of artists are afraid to get political. Not me. So here is a political piece I did about the atrocities that we, as Americans, committed at the Abu Ghraib prison. But instead of people, I painted dinosaurs: 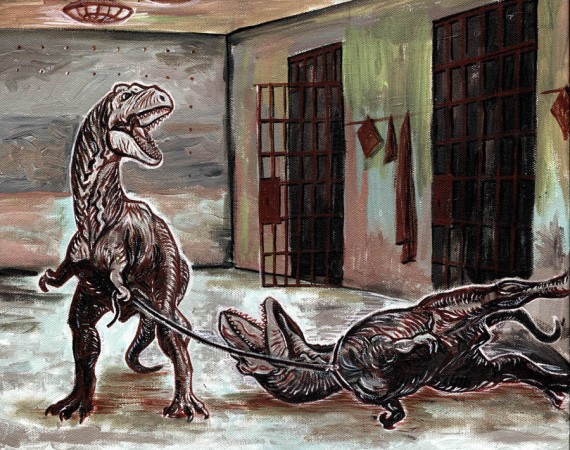 And the dinosaurs are in the same pose, just rotated 90 degrees relative to each other. There’s a fine line between captive and captor.

AS: Do you think science fiction art needs to be serious to be successful? Is there something wrong with escapism?

But you can’t live on a diet of pure sugar. When I was little and the Chris Reeve Superman movie was coming out at the end of 1978, and you waited all summer long in anticipation. It was the one big thing happening. Nowadays a blockbuster is released every week. We are being entertained to death.

It’s a lot of work to keep up with movies, and to Facebook about them. So people aren’t writing about anything important.

Like the girls who got kidnapped in Nigeria. Or Ebola. Or journalists getting their heads chopped off. And when they do notice something important happened in the world, where is the anger, the protesting in the streets? Nah, the response is: Oh, I started a hashtag!

AS: So what should genre do about this? All the “message” sci-fi stories I’ve ever read are really, really boring.

FW: Yeah, like some of those preachy episodes of Star Trek. Like the episode with guys who are black on one side and white on their other.

Sometimes you need to sugar coat the message, or hide it a little bit.

Like, the cover I did for Amazing Stories, which some of your readers have already seen. 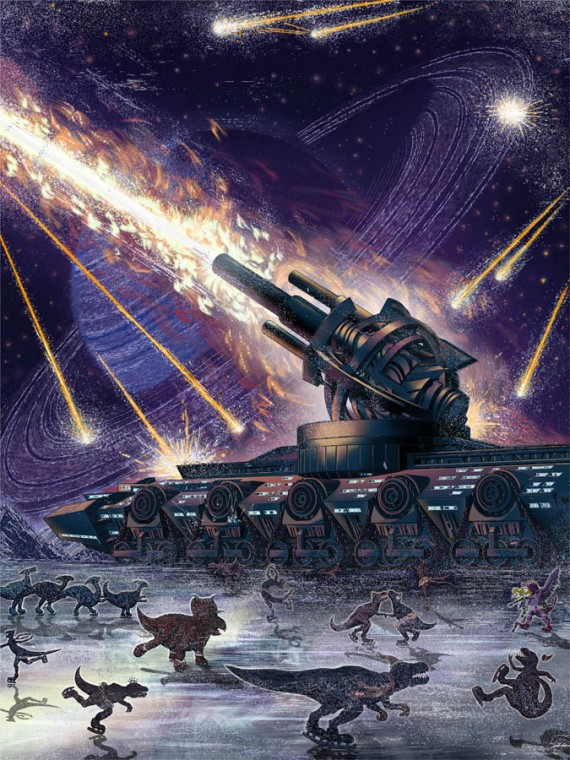 It’s got dinosaurs ice skating and a giant laser tank. Fun! But the message is that we are lost in diversion, completely ignoring Afghanistan and all the other fighting and killing happening just beyond our doorstep.

FW: No, but I just had an idea for a cool painting!

AS: Tell me about it. We will use the power of imagination.

FW: OK. You go into a science fiction convention art show today and you’ll see the exact same stuff you would have seen twenty years ago. Cute baby dragons. Kittens with wings. It’s like 9/11 and Afghanistan and Iraq never happened.

What if you saw a huge painting in glorious, brilliant colors. Like a riverboat. So bright you can’t look away. But it’s not a dragon, it’s an image of a journalist being beheaded, a blown-up screen cap. Because terrorists are putting up their home videos of beheadings on Youtube. And the painting has to be huge, absolutely enormous so you can’t get away from it. Or you have to walk around it.

And all around the edge of the painting are the cutest kittens with wings you’ve ever seen!

If you were a ten-year-old at your first convention and you saw that, your brain would melt.

AS: Is that what you want to do? Melt brains?

FW: Among other things. Harlan Ellison once wrote, and I paraphrase, “I contain multitudes, I contradict myself, so bite me.”

Some artists are a one-trick pony. I like to do a lot of different things, and work in different media and different styles.

AS: Let’s shift gears. What else are you working on?

Here are some of the spaceships I made for the iOS videogame “Revolution 60”, which is now out in the App Store. 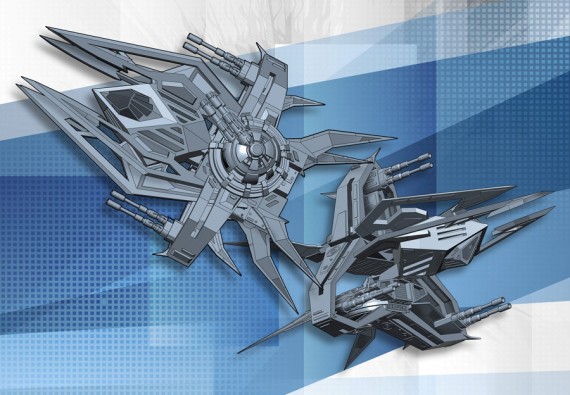 I made these in Autodesk Inventor Fusion, which is an easy-to-use 3D modeling program.

But if you’re going to science fiction art, it’s good to know some science.

While my background is in biology (I have a Ph.D. in genetics), I read a lot of space science. So the spaceship design is really inspired by that.

One of the problems with the Apollo spacecraft was heat dissipation. You think this wouldn’t be a big deal in space, but the ship was blasted on one side by the sun, without an atmosphere to attenuate the heat. And the other side was freezing cold. Plus the electronics were generating gobs of heat. One solution was to cover the service module with different kinds of radiators.

So these spaceships are all about heat dissipation. From the engines, from the sensors and particle guns and related peripherals. Things are made in modules, so there’s a high surface to volume ratio. This also means that it’s easy to replace components if you need to upgrade or up-gun.

So the science informs the aesthetics. Because something with a lot of pieces is more interesting than a cylindrical rocket or a disk-shaped saucer.

AS: How did real-life science inform other design decisions for “Revolution 60”?

FW: When I designed Lieutenant Commander Holiday’s blaster, called the Needler, we decided to make it a gunblade. 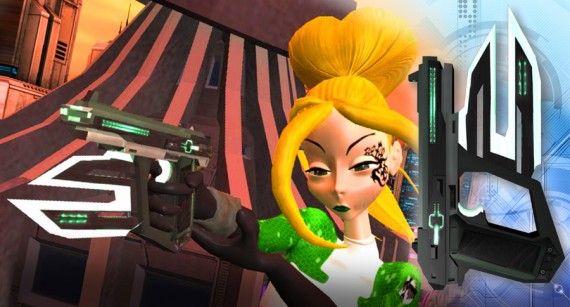 But I thought it would be really fun if the body of the blades were made of a piezoelectric material, that could convert mechanical energy (like a shock) into electricity. And then the edge is made of an electromorphogenic material, that changes shape when a current is passed through it. So every time you hit someone with the weapon, the blade gets sharper and sharper.

We also put a lot of thought into the design of the nanobots. There are three kinds, I, II and III, from smallest to largest.

The type I nanobots can actually bend DNA. This design is based on an actual protein in E. coli, Integration Host Factor, which a friend of mine, Stephanie Dellis, studied when we were in grad school. Steph has since passed away, so this image is a tribute to her, in a way.

We go on and on about the science and show a lot more pictures in the “Revolution 60” Lethologica, which is what we call the technical manual. http://www.fandas.biz/shop/the-chessboard-lethologica

AS: Are there hidden political messages in the nanobots?

FW: In the nanobots, no. Unless you consider the message: Do more science!

However, in one of the other Rev60 images, yes, I purposefully put in hidden images and messages. 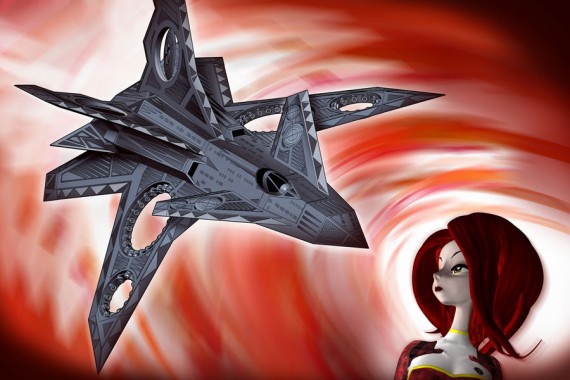 (A more detailed version of this image is viewable here)

There’s the message of, yeah, feminism! Women can be pilots, too! Though fewer than one in ten American pilots is a woman.

But there are actually other hidden messages in this image, too, just for fun, which no one has yet decoded, which disappoints me.

AS: Where can be see more of your work?

FW: Check out my website – frankwu.com. There are more hidden messages – everywhere!

How important is Fraud in the SF/F art market? I could write lengthy blogs on how forgers break down and then reconstitute the same clay to fashion Mid- and South American artifacts, using original (thousand-year-old) molds.  But there are Archaelogy magazines for that.  I could tell you how numismatists weigh coins to identify the fakes, […]