The new graphic novel Pacific from Titan Comics written by Martin Trystram and Romain Baudy and illustrated by Kyung Eun Park comes at us from both time and space. Yes, it is weird tale about a submarine crew going mad over the strange appearance of an unnamed book, but it is the raw historical imagery and genuine wartime tension that brings the terrifying story to life. 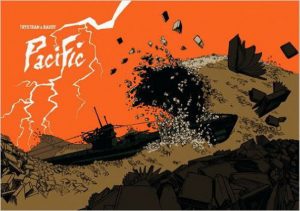 The e-book version was released by Titan Comics on November 23, 2016 but the Hardback edition is expected to be released on December 20, 2016.

This recently translated book takes place near the closing days of World War II. Udo Grotendick is an eager young radio operator assigned to a German U-Boat patrolling the waters in the middle of the Pacific Ocean. After fifteen horrible missions at sea, the remaining crew is slow to welcome the high-spirited newcomer. To make matters worse, the tension quickly turns bizarre when a shipmate discovers a mysterious book in Udo’s backpack that had long been banned by the NAZI party as dissident literature. Udo does not own the book and does not know where it came from. But after it is tossed into the sea, it soon reappears aboard the ship. No matter how many times the crew tries to get rid of the book, it shows up again and again. This eventually drives the crew insane, but it is the frightening realization in the end that will leave the reader in awe as we learn that this is not the first, nor the last time that this has happened.

Fans of historic fiction should enjoy the visual details of the images. The dark interior of the U-boat allows readers to experience the uncomfortable closeness of such a large tired crew under the surface. Even the simplistic shadowed images reveal the complexity of the vessel, and at times the ship becomes a primary character. The scenes of action on the surface may depict some of the most exotic locations around the Pacific, yet it is the tension of war and the awkwardness of the captain’s actions that are so cleverly expressed in Park’s colorful display.

There are two omissions worth noting in the story: both the name of the book and the name of the U-boat are never mentioned. Regardless of whether this curiosity was simply an oversight in translation or by design to add suspense to the mystery, the question remained throughout the story and at times became a distraction while reading.

It should also be noted that Uzo’s role as a radio operator does not play a significant role in the plot, and in hindsight, seems somewhat like a missed opportunity. This turns out to be a poor decision by the authors as the position could have been utilized a lot more, both in the character’s development as well as a tool to show the crew’s desperation to solve the mystery of the returning book. As the crew slowly goes mad, it would have made more sense to have Uzo use his skills to contact the outside world. We do learn about the end of the war through Uzo at his station, but this gets overshadowed by the bizarre happenings with the mysterious book and the historic moment seems to lose its importance.

The story definitely has a Twilight Zone feel to it and should appeal to the speculative fiction crowd, but Pacific by Martin Trystram and Romain Baudy is more suited to fans of historical fiction as they are more likely to sit up and take notice.

Fanzines: What the heck is a ‘zine, anyhow? Well, ‘zine (usually abbreviated without the apostrophe) is short for fanzine, which should be self-explanatory. Unless I’m very much mistaken, SF fans were the first ones to publish zines as a regular thing; now all sorts of subcultures have them. In case “fanzine” is not self-explanatory, I’ll […]

Let’s talk about Star Trek. Actually, before we do that, let me first lay out my biases: I’m a minor trekkie, having grown up with The Next Generation and the various movies. The 2009 reboot ranks as my favourite of the films, excluding The Wrath of Khan which cannot be matched in its awesomeness. However […]