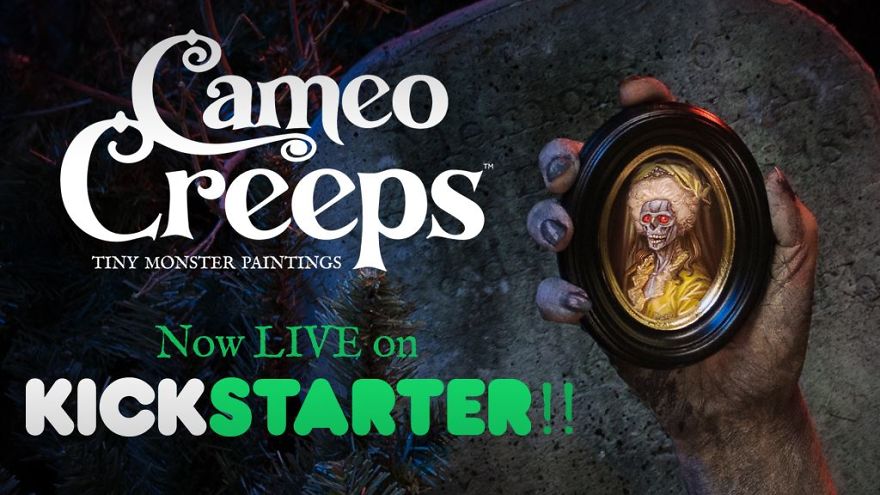 Cameo Creeps are painstakingly detailed miniature monster portraits inspired by Elizabethan paintings of the past. What makes these unique and fascinating is their size. Each Cameo Creep reproduction is a unique miniature piece of art for you to collect. Created by Chris Seaman who has been working as a fantasy artist for the last 16 years (Dungeons & Dragons, Harry Potter, Hearthstone, World of Warcraft, + more) Painting in miniature for the last two years, these cameo creeps are what emerged. Get them while you can! 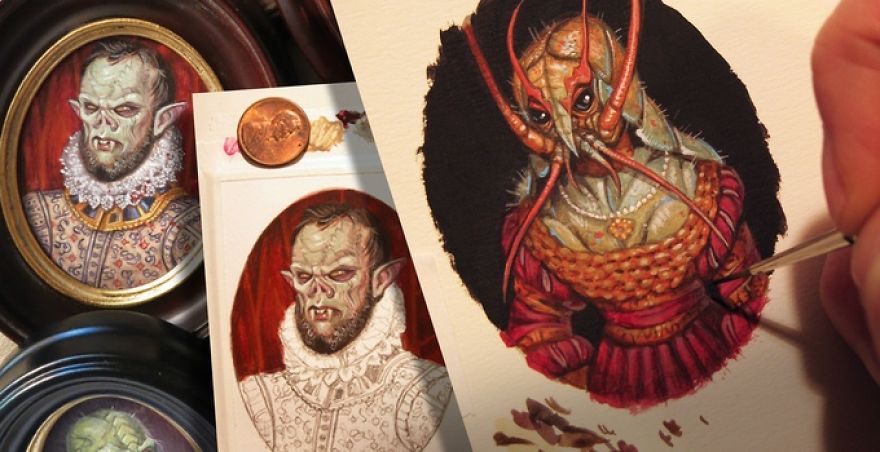 I was fortunate enough to get a quick interview with the artist and creator of the Cameo Creeps, Chris Seaman! You may know his artwork from Dungeons & Dragons, World of Warcraft, Harry Potter, Pathfinder, Hearthstone and many, many more fantasy table-top games and the like. He has been doing miniatures for the last two years and the Cameo Creeps series was born.

ASM: How did you get started into doing the Cameo Creeps? They’re wonderful!

Chris: I do several conventions a year and wanted an original piece of art that i could create reasonably fast and sell for a reasonable price. I debuted them at IlluXcon’s main show in 2014 and practically sold all 13 originals. So I painted another batch for another show at the tail end of 2014 and sold those.

I did a painting for a Zombie themed show the previous year in NYC in 2013. I painted the classic Han Holbein’s Henry the VIII portrait as a zombie. The owner of the gallery liked it so much they used it for advertising to promote the show. that same year that paining was accepted into Spectrum. a huge honor and of course a confidence boost that there might be something special there. Honestly the idea just popped into my head.

Chris: What’s really crazy is the miniature cameo frames. The woods I found were so rare and actually manufactured in Germany. So rare infact, I bought all the ones I could find on the east coast. That manufacturer has since went under and are no long making cameo frames of a molding and style I like for my Creeps. So I’m making them myself. You can’t go to a hobby shop and just pick them off-the-shelf.

ASM: Oh wow, that’s really cool and makes that all the more special.

Chris: When I started making my reproductions I bought the last 75 here in the US. But they were all different colors and moldings. I wanted to make them uniform and consistent with the vision I had for my brand,
so I looked to manufacturing here in the US. If I wanted to keep making Cameo Creeps I had to do it myself. 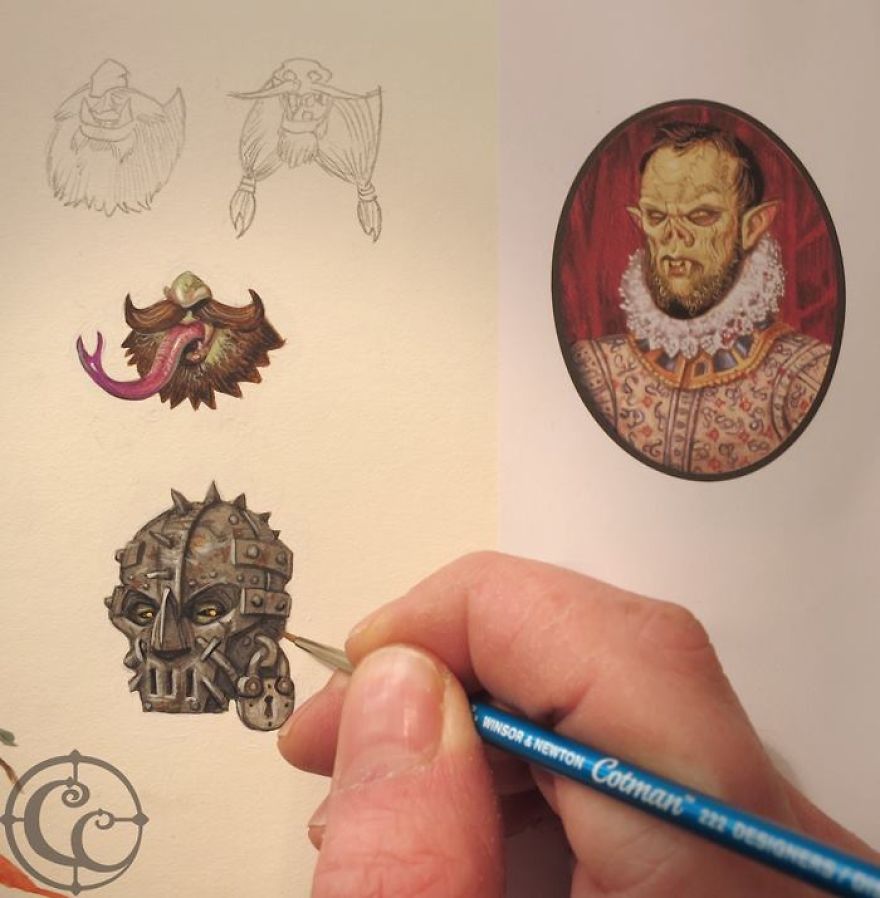 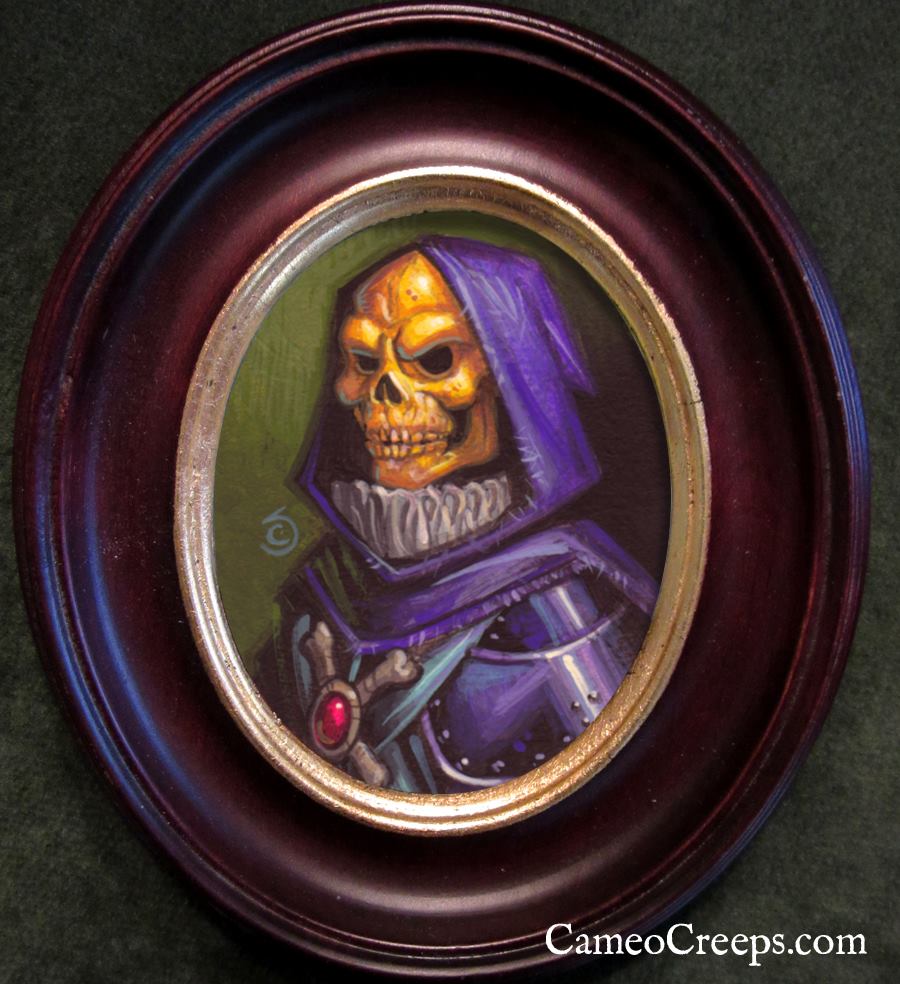 ASM: How long did it take you to paint the original set of Creeps?

Chris: I can paint them quickly in about two to three hours, give or take.

ASM: That is amazing. They’re wonderful and your detail is, again, absolutely fantastic.

Chris: But they are just so fun! I have so many ideas. Honestly, it was a theme I just happened into.  I wasn’t even thinking about expanding the Creeps like I have when I painted the first one. But working as a professional for so long, you get to see the signs that people are reacting to something special and jump on it.

ASM: You don’t want to miss that mark and lose out on a chance.

ASM: What other rewards or stretch goals are in the works for the Kickstarter? If you don’t mind me asking, of course.

Chris: Oh no, that’s totally cool! I have several and might expand them even more if the campaign does very well.

1. Create-a-Creep Sticker Pack – every backer would get this.
2. Cameo Creeps Fold out check list – would be put in every packaging.
3. Set 1 Family Tree display tapestry – organize your family tree of creeps how ever you want- probably an add-on.

And more, of course, but I won’t reveal them all just yet!

ASM: Thank you so much for talking with me and I look forward to seeing more Creeps and artwork from you soon!

Chris: Cool! Thank you so much!

For everyone that is interesting in following along these delightful Creeps, be sure to check out the Kickstarter campaign and don’t forget to follow Chris’ artist page where you can get updates every day for in progress videos, reward updates, and more! 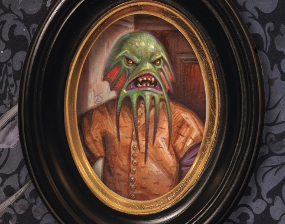 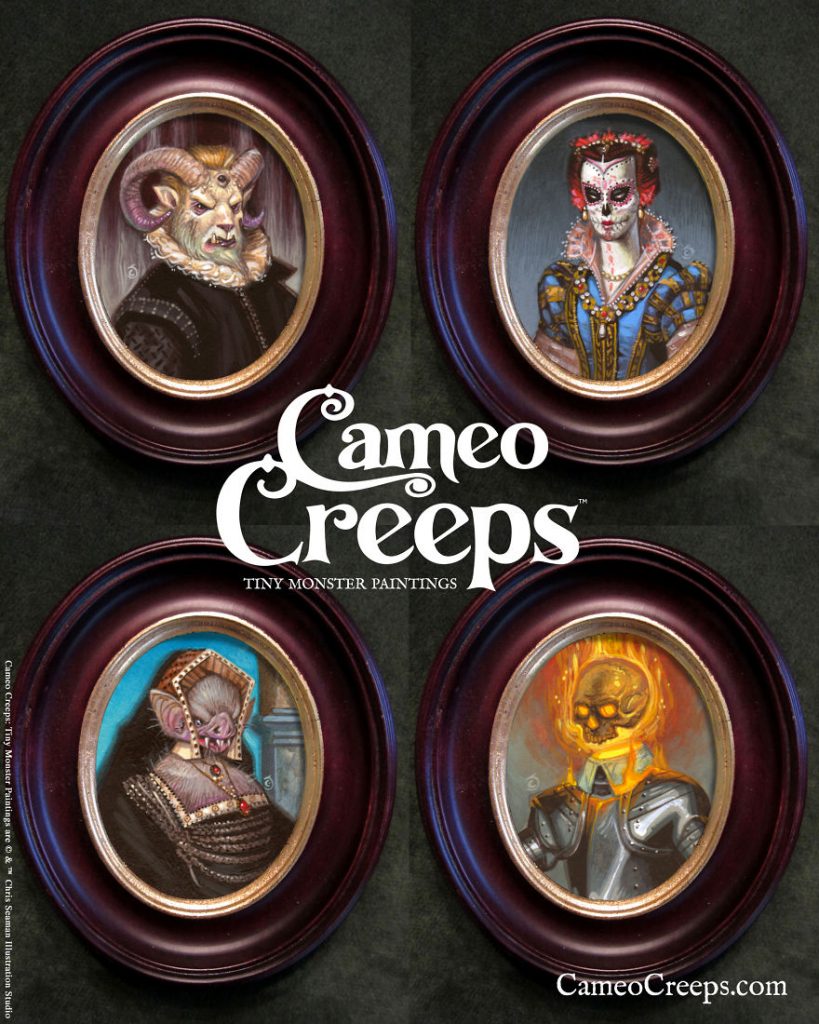 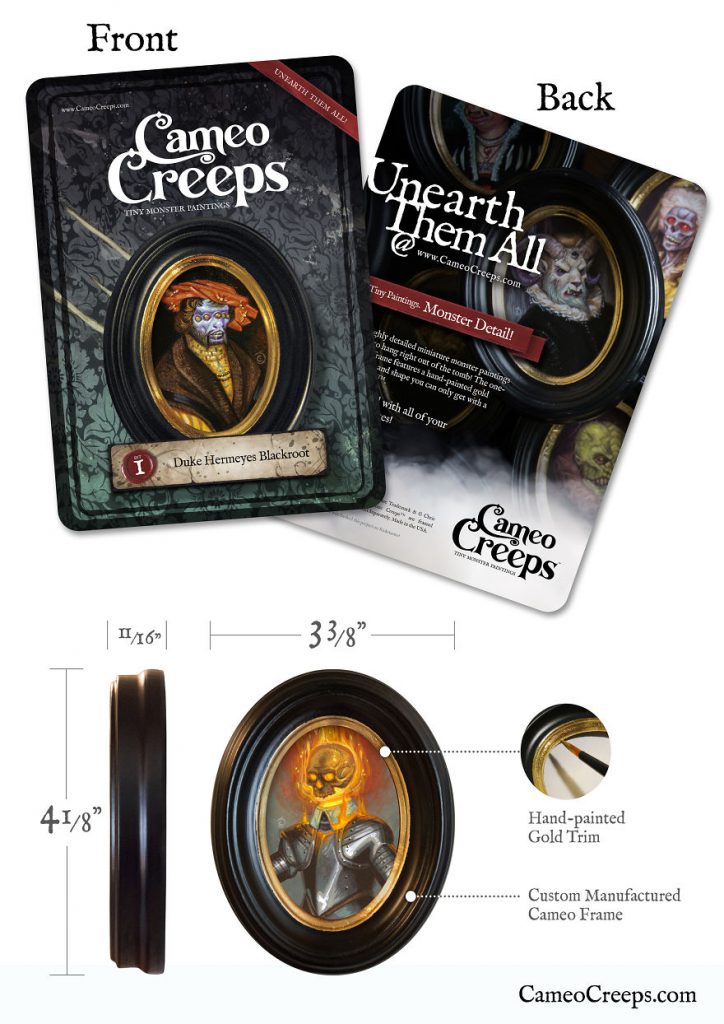 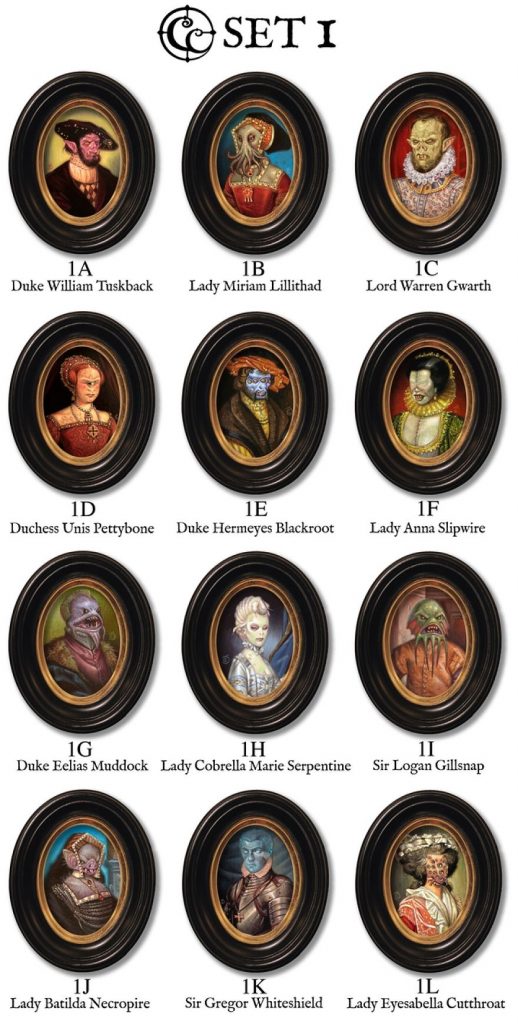 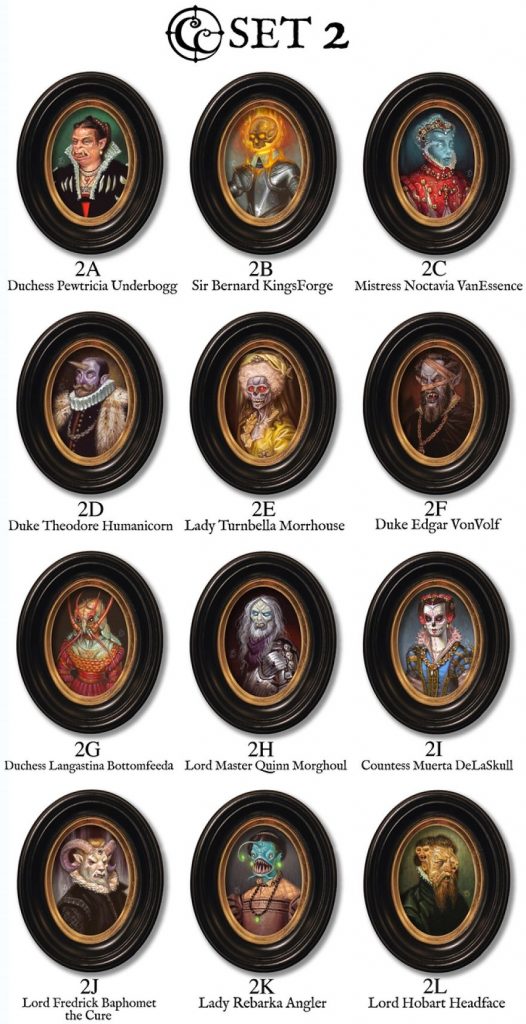