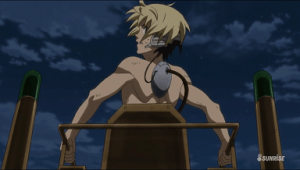 Mobile Suit Gundam: Iron-Blooded Orphans #31 – Galan Mossa is right that if you keep someone busy enough, it keeps them from thinking too hard about what’s going on. Luckily, he’s dead wrong about Hotarubi politely going home after being denied permission to send anyone down to the surface. The Tekkadan reinforcements are going to get there somehow, even if they have to do it the hard way.

But broad hints are being dropped that it will be too late for one or both of Takaki and Aston. I’d bet on it being Aston, leaving Takaki a chance to understand how he’s been played and to spend the rest of the series dealing with the repercussions.

I think Mossa has underestimated Fareed, as well. Fareed is a smart enough guy to put a stop to the fight when the truth is revealed. He’ll probably use it as an excuse to pressure Arbrau into decommissioning its forces, though. 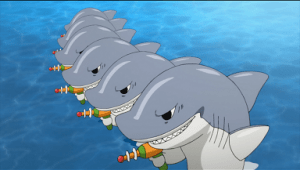 Cheating Craft #5 – Mumei’s class gets a day to relax by the pool, except it’s a cover for another test, overseen by a deranged enhanced shark, who has never gotten over the insult of vertebrates choosing to evolve to live on land, and has decided that today is the day humans need to die once and for all, and then the series becomes Sharknado: The Anime.

Now that’s how you do a beach episode. Action, suspense, sharks with frikkin’ laser beams, and an actual justifiable plot reason for destroying everyone’s swimsuits.

And story development! It turns out the guy from the pen shop is in Mumei’s class, and is both attracted to him and looking for someone with great power. Or perhaps they’re the same thing. Anyway, it sounds like he has plans for Mumei now that he’s gotten a demonstration of his power. 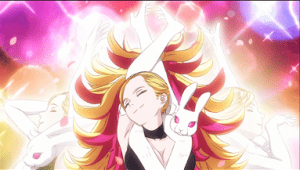 BBK/BRNK #18 – Zetsubi Hazama is still a terrific fighter, still a brilliant spy, and still possessed of a mysterious power that allows her to conceal a much bulkier outfit under a tight and skimpy one. Seriously, is her entire wardrobe woven from nanoscale filaments, or what?

It’s nice to see the adult allies getting a chance to be competent and awesome in a show focused on a team of kids. Also under that heading is Matobai, demonstrating once again that he is the most sensible person in this show by being the only one who thinks that inadvertently setting up a hideout just over the next hill from the villain’s country estate might turn out to be problematic. As it does: just as Kaoruko is freed, Azuma is captured. This may be Kaoruko’s chance to lead a team for a while, provided they can find a buranki heart somewhere.

Meanwhile, Entei is growing a brain, which is the one thing buranki aren’t supposed to be capable of anymore. This might be another consequence of Reoko’s fusion with it, and perhaps part of the explanation of why her continual regeneration is giving her brain damage.

All this may be academic if Guy succeeds in manipulating our heroes into destroying Treasure Island before the comet can arrive. That frees him up to find a new way to kill off all the other bubuki users. 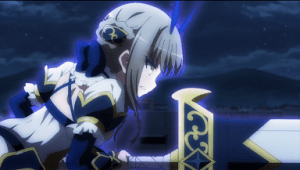 Magical Girl Raising Project #6 – I did say last week that Sōta probably was marked for death, didn’t I? At least he gets to go down fighting. Cranberry politely explains to him that this is not a Shōnen Jump story where your adversaries tell you how to become stronger, then slaughters him, possibly with some help from Fav.

Cranberry seems to have been through a previous iteration of this competition. Fav is letting her use her insider knowledge to help put on a good show. But who is the show for? Not the locals, since they’re taking such pains to cover up what’s going on.

Magicaloid 44’s death allows the episode to be bookended with a pair of Talking Killers. To be fair, having a decapitated corpse stand up again and stick its hand right through your torso is something that most people won’t think to expect… at least most people who haven’t seen an eyecatch with a big spoiler a few minutes before. I really wish they could have waited another week to feature Alice. 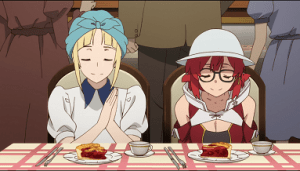 Izetta: The Last Witch #6 – That wasn’t nearly as bad as last week’s teaser implied. Only about half the episode was spent in a holding pattern, and there was only one pandery fanservice scene. Sheesh, Izetta, don’t scare us like that.

So the death flag finally catches up with Jonas. If the point is that Sieg is a person who Does What Must Be Done to preserve his country, I hope that next he shoots the idiots who decided to discuss the most sensitive secret Eylstadt has in loud voices in a place where anyone could have been listening.

With the Germanians turning their attention northward, this apparently looks like a great time to leave Eylstadt defenseless for a while as Izetta sneaks Finé to a peace conference. This will probably lead to Izetta being deployed to help out up there. It may also be time to find out what the alternate fantasy Soviet Union is up to.

Check out these DUST releases you might have missed – a robot dishwasher in search of itself, AI sex aides, waiting for the end of the world and more shorts await

Golems, Kabbalists and NAZI Germany collide in The Book of Esther