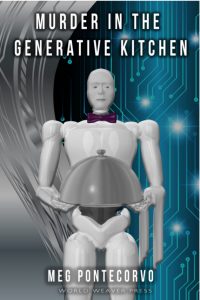 Coming out on September 27, 2016 from World Weaver Press, the book Murder in the Generative Kitchen by Meg Pontecorvo is a compact little story with a lot to say – this petite novella packs a lot of punch for its size. On the outside, this is an examination of the moral and legal implications of an advanced future laced with technology. But deep inside, readers will find two complex interwoven stories that could stand alone on their own merits.

In the primary story, to which the title refers, we follow the trial of Mrs. McConnery “Connie” Ellis, who is being accused of murdering her husband George by poisoning his food. The second storyline follows juror Julio Gonzalez, a young man trying to cope with his own crumbling relationship while absorbing the evidence of the case through a unique court system.

The year is 2060, with the trial taking place in a virtual courtroom where the only living person is the defendant, Mrs. Ellis. The judge, defense attorney, prosecuting attorney, and the jury are all comprised of robots. Accused of lacing her husband’s meal with cyanide, the wife’s primary defense lies in convincing the jury that the “generative kitchen” is the true murderer.

Pontecorvo takes readers on a thought provoking journey examining the probability of an automated kitchen being able to commit the ultimate crime. Isaac Asimov’s three laws are not mentioned directly, probably because we are talking about a kitchen instead of a robot, but the conflict of artificial intelligence interacting with the human condition quickly becomes the focal point of the argument between the prosecuting bot and the defense bot.

Though Mrs. Ellis might be considered a main character, even though we are only given small glimpses of her role through courtroom testimony, the generative kitchen actually becomes the primary focal element in the story. The kitchen slowly develops into a charming, helpful, and increasingly powerful entity that steals the show. It does not help the case when the defense calls upon Gen-K Marketing VP T.J. Summers as a key witness: he explains that the concept of the generative kitchen is “to create by a natural process, to evolve, to originate, to engender, to procreate, or, when applied to our product, to co-create! And that translates into a kitchen that works with you and evolves according to your habits and desires.” Yup, Asimov would be proud. 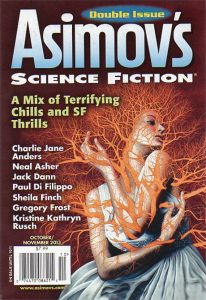 Perhaps this would also be a good place to mention that author Meg Pontecorvo had an earlier novella titled “Grounded” published in the October/November “Double Issue” of Asimov’s Science Fiction magazine.

Remember I mentioned earlier that the virtual courtroom had a jury of robots? This is where the second storyline comes in. It seems that in 2060, the judicial system has merged with the tourist industry, either by necessity or for profit. Not unlike those horrid vacation traps where you can get free admittance to just about anything as long as you sit through hours of time-share sales pitches, Vacation Jury Duty provides extended getaways to exotic locations. The “only” stipulation is that you must volunteer to be a member of the virtual jury. When you strap on the virtual headset, you become one of the stoic robots sitting in the jury box. The downside being that you cannot mingle with any other jury members who are also at the resort until the trial is over and deliberation begins.

Julio Gonzalez is in such a resort, relaxing in Acapulco while sitting in on the trial of the Murder in the Generative Kitchen. Contemplating the future breakup with his girlfriend back in Chicago, readers will laugh and cry as he tries vehemently to make contact with the mysterious woman he spies at the resort – without getting caught by the ever-present security cameras. Oh, and Julio must also pay attention to the trial.

Looking deep within the pages, readers will be drawn into the long debated arguments of assisted suicide, global morality, and international laws. On the lighter side, Pontecorvo’s perception of combining vacations with the judicial system is as entertaining as it is frightening.

Murder in the Generative Kitchen by Meg Pontecorvo is a compact little story with a lot to say. Readers will find a fresh take on Asimov’s three laws, see a twisted future where vacations are paid for by the courts, and learn that the same old arguments will still be contested long after we’re gone.