The family and I recently saw the latest Marvel Installment Captain America: Civil War, and prior to going to the theater, we had a lengthy discussion over what we thought the conflict was about and how a group of good guys can come to war against each other. It was a healthy discussion and I was admittedly proud of the contributions and insight the kids had. Not surprising, after the movie, the discussion was more about the theatrical imagery and well timed humor – a lot of the things that draw so many people to the theaters. It seems the deeper core of the conflict may have been lost in the specter of the film. But this is not a review of the movie. 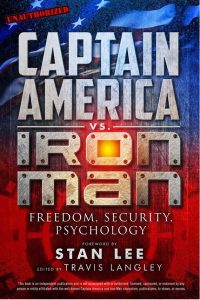 Travis Langley, PhD, is a psychology professor at Henderson State University (Arkadelphia, AZ) who instructs courses on crime, media, and mental illness. But to fandom, Dr. Langley speaks our language with his editorial work on such titles as The Walking Dead Psychology: Psych of the Living Dead, Star Wars Psychology: Dark Side of the Mind, and the soon to be released Game of Thrones Psychology. So when Captain America vs. Iron Man: Freedom, Security, Psychology arrived from Sterling Publishing, this geek couldn’t resist giving it a look.

On the outside, the conflict between Captain America and Iron Man is centered around the moral obligation of those with super human powers and the social and economic consequences left behind after said heroes do battle with evil, leaving the world’s stage in ruin. The questions of who should be authorized to regulate the decisions that humanity must live with in the aftermath of war is just as complex in the real world as it is in the comic universe. I prefer fictional encounters, with the hope that they stay fictional.

We’ve seen this type of conflict examined in other works as well. Take The Incredibles film for instance. Superheroes are all but wiped out by bureaucratic lawmakers who demand accountability. It makes for good drama, but it also brings to light the problem of regulating laws in a hero influenced world.

In the epic battle during the first Avengers movie, the military powers decided to launch a nuclear weapon on a city under siege by Loki’s army. In the end, the Avengers not only faced an alien foe, but they also confronted a very bad decision by an unprepared if not incompetent government. Ironically, this is the same government that demands regulations over the heroes in Civil War because of the collateral damage they leave behind – but let’s not bring up that nuke incident.

The war of egos goes a lot deeper than just between to alfa superheroes, and Captain America vs. Iron Man: Freedom, Security, Psychology takes readers even deeper into what these heroes face. The real issue is the delicate balance between liberty and sanctuary and the conscious endeavor to wield them both. A governing body consisting of a conglomerate of nations may very well speak for the majority of humanity, but the beliefs of our heroes may not always follow the regulations, and sometimes for very good reasons. It’s quite an intriguing debate, and far to complex for those in attendance in our family minivan heading home from the theater. But for the members of fandom looking for some in-depth psychological examinations of our favorite heroes, it’s a fascinating read.

In addition to a forward with obvious anecdotes loyal to the Marvel brand from the legendary Stan Lee, and some engrossing thoughts by editor Travis Langley sprinkled throughout, this collection of essays includes:

Trauma Shapes a Superhero by Janina Scarlet and Jenna Busch

What It Takes to Be a Superhero by Patrick O’Connor

Training Time Tales with Steven and Anthony: The I/O Psychology of Getting Better at Being Super by E. Paul Zehr and Travis Langley

Codes of Masculinity: The Road to Conflict by Alan Kistler and Billy San Juan

Wild Heroes: The Hard Work of Being “Moral” by Eric D. Wesselmann and J. Scott Jordan

A Shield by Any Other Name: The Power of the Prosocial Role Model in a Mask by Alex Langley

These titles are very telling and readers can either delve into the specific subjects they are most interested in or start at the beginning and methodically follow Langley’s thought process as he examines the never ending debate of origins, missions, and ideals. Regardless of your views, there is a lot of thought provoking information in this book.

The embattled heroes of our favorite comics have a lot more to deal with than just the bad guys. Stan Lee has made a living pointing out that “with great powers, comes great responsibility.” Travis Langley has pulled together an entertaining collection of essays in Captain America vs. Iron Man: Freedom, Security, Psychology to discuss these great responsibilities. It is the perfect companion for the philosophical fan who wants to gain a better understanding of what it means to be a hero or for the casual fan who just left the theater wanting to slip into their hero’s shoes.