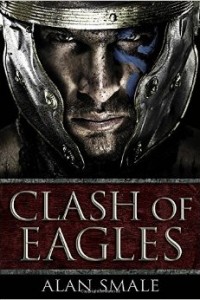 If Rome never falls you know at some point they will look to see if there is anything else on the other side of the Atlantic Ocean to conquer. That is the premise of Clash of Eagles by Alan Smale, the first book in the Hesperian or Clash of Eagles trilogy. The novel itself is an expanded version of the original short stor,y “A Clash of Eagles”, which was published in Panverse Two in 2010 and also won the Sidewise Awards for Alternate History in that same year. Now the full-length novel version is up for the same award. Does it still hold up?

Set in 1218 AD, Clash of Eagles is told from the perspective of Gaius Marcellinus, Praetor of the 33rd Legion. They are on a mission to find and conquer a city of gold located somewhere in our timeline’s North America that they suspect exists thanks to a Viking (nominal subjects of Rome at best) longship Rome captured that was weighed down with the valuable metal. Harassed by the natives and mutineers, Gaius still manages to march his legion from the Chesapeake Bay to the city of Cahokia. His legion, however, is unprepared for native weapons (such as gliders and their version of Greek fire…which I know sounds crazy but Alan makes a case for it in the book) and they are massacred with only Gaius surviving. Despite being kept alive so that he can show the Cahokians how to use Roman steel weapons and armor, Gaius is wracked by survivor’s guilt and sneaks out in the middle of the night. When he interrupts a Iroquois raiding party, however, he decides to stay in Cahokia. Gaius begins to admire Cahokian society and wants to avoid another confrontation between them and Rome (because he believes the lure of gold will draw another legion back to the New World eventually). To do this Gaius encourages Cahokia to become more “civilized” by adopting Roman technology, military tactics and ideas. As Cahokia wins more victories in their endless war with the Iroquois using Roman weapons, Gaius begins to think his plan may work after all.

Clash of Eagles was an enjoyable read that still managed to subvert some popular alternate history tropes. For example, the idea of someone from a more advanced society giving a leg up to a more primitive society isn’t anything new to the genre, but that story usually involves time travel. This novel cuts out the fantastical and leaves us with a more believable scenario. Additionally, Smale presents the Iroquois in a way that is quite unusual in alternate history. Usually the Iroquois are presented in a very sympathetic light in the alternate timelines that feature them, probably because Americans admire their democratic system of government. In this novel, however, they are presented as the Amerindian version of the stereotypical Viking (which becomes very obvious in the last chapters), especially in comparison to the urban Cahokians. Its a different way of looking at their culture and it made the nations of “Nova Hesperia” a lot more interesting, especially when things go wrong and Gaius’ reforms have unintentional consequences. 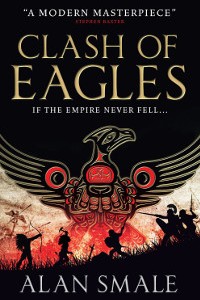 Admittedly several of terms used to name the people and places of Smale’s alternate North America are rather anachronistic, but to his credit, Smale admitted as much in the appendix (and you have to love an alternate history book with an appendix) where he said he kept the common, present day names for them so as not to confuse anyone. Furthermore, I would like to see more details on how the Roman Empire not only survived as a united entity up to the 13th century, but also expanded as far east as India. The point of divergence seems to be Publius Septimius Geta not being assassinated and defeating his brother to become emperor. Geta later instituted reforms on both the civil and military level that allowed Rome to (barely) survive the Germanic invasions. From the descriptions of Gaius’ legion and other details, we learn that Rome is also more accepting of the Germanic barbarians which probably explains why Rome was able to survive by assimilating them into their society rather then fighting them. To be fair, info dumps on the point of divergence really aren’t necessary and there is still enough info to make an educated guess.

The one big issue I had with Clash of Eagles, however, is that there does not seem to be any evidence of depopulation of Native Americans due to Old World diseases. History tells us that there was a massive die off throughout the New World as Native Americans came in contact with European diseases. Now it can be argued that no one has brought over any diseases yet due to the minimum contact the two cultures have so far. That being said, Vinland (the Viking New World settlement from our timeline that was founded circa 1000 AD) exists in this timeline as an actual settlement and its implied that the Vikings have been as far south as Mesoamerica. So 200 or so years seems like a long enough time for some transfer of disease to happen, but if it did, I noticed no sign of it while reading.

Granted, Clash of Eagles is only the first book in the trilogy and perhaps Smale will address it in future entries. I actually have a copy of the second book in the trilogy, Eagle in Exile, which I plan to read next because like I said earlier, I enjoyed Clash of Eagles and really do want to see what happens next to Gaius and his plan to save his adopted home from the ever present threat of Rome.