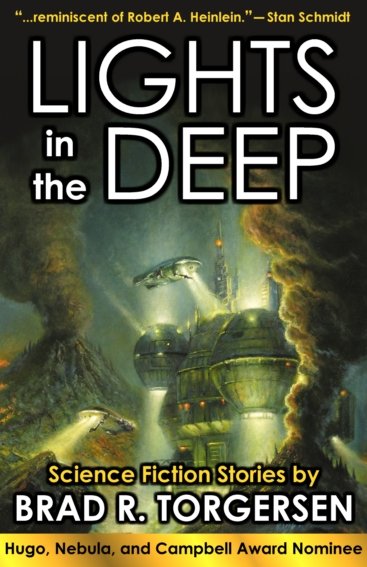 There are a number of subgenres in the science fiction and fantasy fields, and the popularity of any particular one will vary with time. For example, I don’t see as much hard science fiction being written, particularly the kind set in the near future, as I used to. Fortunately, it’s a rare thing for any particular subgenre to completely disappear. While hard science hasn’t disappeared, I’ve had trouble finding works that appeal to me, especially at shorter lengths.

Which is why I so thoroughly enjoyed Lights in the Deep. Brad R. Torgersen primarily writes stories set in the near future Sol system, although there are a couple set further away in time and space. And he does his homework and gets the science right. As a reader with scientific training, I find that important.

But if that were all he did, then his work wouldn’t do much for me. Fortunately, Torgersen remembers that good fiction is first and foremost about people. His characters are complex, ranging from a boy orphaned during a war and rescued by a couple running an observatory in the outer reaches of the solar system (“Outbound”) to soldiers using remote robots to build a space station (”The Exchange Officers”) to a worried father trying to find his daughter in the ocean depths (“Ray of Light”) to a chaplain’s assistant trying to keep his flock alive (“The Chaplain’s Assistant” and “The Chaplain’s Legacy”) to a man resurrected by his robotic children to save them (“Exanastasis”).

Torgersen invests much into his characters and his situations, and the payoff is rewarding for the reader. While I wouldn’t want to live in some of the worlds Torgersen creates, I enjoyed visiting them all and wouldn’t mind returning to some of them.

The reason I say that is Torgersen’s worlds feel lived in. Some are close enough to ours, just a year or two in the future in some cases, that they feel like home. Others are clearly not our world, but they still feel lived. There are no dystopias here, although some come close. On the other hand, there are no utopias either. Rather, what we get are societies that are a mix of both.

In addition to the fiction, there are several essays and tributes included. Some readers might not care for this sort of thing in a volume of fiction, reasoning they’ve paid for fiction, not nonfiction. Me, I rather like a sprinkling of nonfiction mixed in with the stories. I also enjoyed the afterwards. Torgersen tells a bit about each story, and in doing so, he gives the reader a glimpse into the life of a working writer.

I read several of these stories when they first appeared in Analog. The stories, in case you’re wondering or even if you aren’t, were “The Bullfrog Radio Astronomy Project”, “The Exchange Officers”, and “Ray of Light.” I read them before I’d become familiar with Torgersen’s name. I’m pleased to say they held up on a second reading. That isn’t always the case. Some stories are Read-Only-Once stories, mildly entertaining at the time but not worth a second read. Torgersen’s didn’t fall into that category.

I read the ebook version of Lights in the Deep. Everything about the book was professional. The cover art is gorgeous. The interactive table of contents worked and took me to the stories it said it would.

If you’re a fan of hard science fiction with a strong human element, check out Lights in the Deep.

What Are Ghost Particles? These Mysterious Space Fragments Could Be The Key To Understanding Our Universe