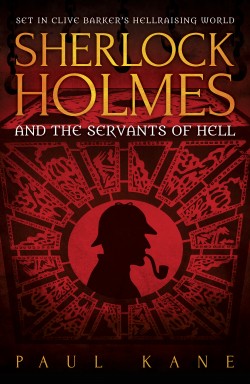 Solaris is excited to reveal the acquisition of Sherlock Holmes and the Servants Of Hell, an horrific adventure from bestselling author Paul Kane that pits the Great Detective against the Cenobites of Clive Barker’s Hellraiser mythos.

About as far away from Benedict Cumberbatch as you can get, Kane’s story – which has remained shrouded in secrecy up to now – is undoubtedly Holmes’ most outlandish adventure to date, launching Sir Arthur Conan Doyle’s finest creation headlong into Clive Barker’s famous Hellraising universe

“The world’s greatest detective meets horror’s greatest icons, what more could you want? Paul has been a significant voice on the horror scene for a while now and he’s steeped in Clive Barker’s hell-bound mythos. That we now have the chance to pit Holmes against a world he could never have imagined is very exciting indeed. This promises to be a journey into hell, pitting two great masters against each other. Gruesome, yet compelling, Kane will undoubtedly deliver the horror crossover of 2016.”

“I’m incredibly excited – if also more than a little daunted – by the prospect of this book. It’s only the third long form fiction featuring elements from Clive’s Hellraising universe, coming after The Hellbound Heart and this year’s massively successful The Scarlet Gospels, and the first time Holmes has ever encountered the mythology. Readers can expect a very different kind of Holmes book, and a very different kind of novel featuring Hell and its famous Servants.”

Sherlock Holmes and the Servants Of Hell by Paul Kane will be published by Solaris in July 2016.

Sherlock Holmes and the Servants Of Hell

Late 1895, and Sherlock Holmes and his faithful companion Dr John Watson are called upon to investigate a missing persons case. On the face of it, this seems like a mystery that Holmes might relish – as the person in question vanished from a locked room – and something to occupy him other than testing the limits of his mind and body.

But this is just the start of an investigation that will draw the pair into contact with a shadowy organisation talked about in whispers and known only as ‘The Order of the Gash’. As more and more people go missing in a similar fashion, the clues point to a sinister asylum in France and to the underworld of London. However, it is an altogether different underworld that Holmes will soon discover – as he finds himself face to face not only with those followers who do the Order’s bidding on Earth, but those who serve it in Hell: the Cenobites…

About the author
Paul Kane is the author and editor of over fifty books, including the bestselling Arrowhead trilogy for Abaddon Books. His genre journalism has appeared in the likes of SFX, Rue Morgue and DeathRay, and he is regarded as a leading authority on Clive Barker’s Hellraiser mythos, having written numerous articles on the series as well as The Hellraiser Films and Their Legacy, published by McFarland books. He lives in Derbyshire with his wife, the horror writer Marie O’Regan, their children and a black cat called Mina.