While there is a decided absence of magic in the novel, the one thing that truly stands out here is how eloquently Rowling has proven beyond a shadow of a doubt that her writing chops stretch far beyond Hogwart’s hallowed halls. 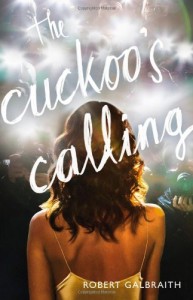 While this is not a standard review for Amazing Stories Magazine, it seemed like a nice choice in order to share with our readers what J.K. Rowling, one of the fantasy genre’s icons, is working on now.

Other than being simply fantastic, there is nothing fantastical about The Cuckoo’s Calling by Robert Galbraith (aka J.K. Rowling). While there is a decided absence of magic in the novel, the one thing that truly stands out here is how eloquently Rowling has proven beyond a shadow of a doubt that her writing chops stretch far beyond Hogwart’s hallowed halls. The Cuckoo’s Calling is a wonderful mystery novel that is likely to introduce a whole new set of fans and readers to the gumshoe/crime genre. I say this as a reader who has been converted by Rowling’s new novel.

Lula Landry is dead. The supermodel’s suicide rocks London as all of the tawdry details of her death wash through the press, papers and television. However, Lula’s adopted brother John Bristow can’t accept the verdict that his sister killed herself, which brings him to the offices of Cormoran Strike, his elder brother’s childhood friend. Strike is a down on his luck private detective whose bank account barely has two nickels to scratch together, a problem that is worsened by the unexpected appearance of Robin Ellacott, the new secretary that the temporary agency has sent over to fulfill the balance of his contract. While his conscience tells him not to take the case, his personal finances convince him otherwise. With the help of his new, and surprisingly helpful assistant, Strike enters the world of the rich and famous, uncovering surprising clues along the way that may indeed prove that Lula Landry was murdered and that her murder is still out there.

While all of the characters within The Cuckoo’s Calling are well done, the most surprising character of all is Lula Landry herself who never appears in a single scene. Instead, the fullness of her charter is revealed through the stories told by her friends and loved ones. By the end of the novel, she feels like a living breathing woman whose personal experiences are as compelling as any of the characters within the novel. Cormoran Strike is easily the most interesting character within the book. While he has some of the trademark characteristics of a private detective–a large, gruff man with questionable connections and contacts that help him suss out answers and leads–he also brings a modern day humanity to the PI field as a wounded vet who has recently returned from Afghanistan. His new and faithful assistant, Robin, is no wallflower. She’s a bright-eyed, sharp-witted young woman who thinks on her feet and who balances sensitivity with persistence as she helps to uncover clues that may reveal the truth behind what caused Lula’s death. Suicide or murder? It’s anyone’s guess until the final pages of The Cuckoo’s Calling.

The beginning of the novel moves a little slowly as readers get introduced to Strike, Robin, and the issues surrounding their individual lives. The novel really picks up speed as they come together as a team. Simultaneously, the investigation ignites as Strike uncovers clues that create conflict between Lula’s family and friends, which also reveal troubling issues associated with the official police investigation. All of these elements come together to invite serious doubt about Lula’s apparent suicide. By the end of the novel the pace is breakneck and the clues are piling up with each turn of the page.

A dramatic departure for Rowling, The Cuckoo’s Calling is the compelling novel that deserves reading and will likely make you fall in love with crime fiction all over again. Perhaps there is a little bit of magic in these pages after all. I look forward to seeing what else Rowling has in store for Cormoran Strike.

Steve finishes his list of, and rating of, 27 James Bond themes and theme songs, throwing in a bunch of related stuff about the films. Bet you can find at least one thing you didn’t already know!

Creature Feature: A Horrid Comedy by Steven Paul Leiva will take you back to those late-night fright fests we enjoyed as kids.