It is part of the human condition to wonder what happens to us after we die. 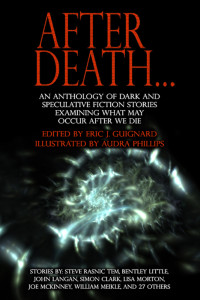 It is part of the human condition to wonder what happens to us after we die. The irreligious say nothing happens to you after you die, other than the natural decay of organic matter. Maybe they are right, but that doesn’t make for a good story, does it? With Eric J. Guignard‘s After Death anthology, you are given almost three dozen tales of the afterlife that range from being horrifying, heartwarming and hilarious.  You can see a full list of all the short stories here.

What is great about short stories is that it excludes the fluff, excess backstory and author fetishes (like food porn) that can sometimes hurt a good yarn. A short story forces an author to get to the meat of the story immediately or else risk losing the reader who sighs and skips to the next story in the anthology. Luckily for me I did not experience this pitfall with After Death. Although a couple of the stories were forgettable (in the sense that after I looked back at the table of contents I couldn’t remember what they were about) the vast majority were entertaining and thoughtful. Some were even emotional like “Forever” by John Palisano. I admit I cried reading this tale about a woman on her death bed being guided to the afterlife by her pet dog.

Some might be scratching their heads right about now and asking: isn’t this supposed to be horror? Yes and no. There are certainly several trips to a hell, but I would classify most of the tales as weird fiction myself. Yes there is a lot of supernatural and mythical elements to these stories, but also modern (and future) science finds its ways into the stories such as in “Someone to Remember” by Andrew S. Williams where Charon drives a diesel-powered ferry and “Be Quiet At The Back” by William Meikle where demons have found out just how useful a pit full of bureaucrats with computers can be when torturing the damned.

Still, in my humble opinion, the most frightening tale of the afterlife was also the one with the least elements of religion or the supernatural. In the near future of “In The Resurrection Policy” by Lisa Morton, humans have perfected the ability to preserve their personalities in case they ever die. Perfectly preserved memories can be inserted into young and healthy bodies to carry on where we left out. But that begs the question: who benefits? I doubt anyone would work to collect, preserve and resurrect humans out of the goodness of their heart. They want to be paid. So what happens when you miss a payment? What made this story so terrifying is how real it felt. I am sure we have all felt the frustration and rage of dealing with an uncaring bureaucracy that feels like they hold your life in their hands…but what if they actually did?

Regardless what you believe waits for us when we die, I strongly believe you will find After Death an excellent collection of imaginative tales of what waits beyond the veil.

Spoilers on Marvel’s Openly Gay Superhero in “The Eternals”