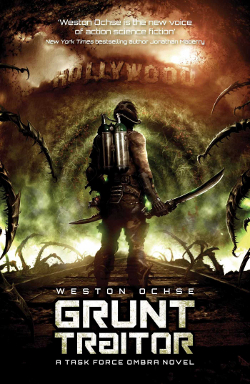 It’s the Twenty First Century and mankind just got the answer to an age old question: are we alone in the universe?

Unfortunately, the answer came with a huge price tag. Aliens invaded, and began to destroy most of the world. Huge “hives” of aliens landed in various parts of the planet and began to spew out vines and creature who infected everything. Humans and animals were contaminated by spore growths that turned them into zombies working for the aliens. And into the madhouse of alien infection, soldiers were sent to destroy the hives, hopefully before they were infected themselves. Aided by powered exoskeletons and weapons of mass destruction, the soldiers fought on.

One such soldier, Benjamin Carter Mason, survived the attack of one hive, losing many of his friends in the process, and possibly some of himself. In his survival, the leadership thought they had found a key to ending the battle and winning the war. So they kept putting Mason in command of teams and sending him out to kill aliens, and hopefully get more information to use in devising weapons against them.

But for all Mason’s ability as a soldier, he is also a man. When leadership takes his girlfriend and turns her into a cybernetic war machine, not even giving her the choice to die if she chooses, Mason goes against orders, finds her and ends her suffering. So they send him out again and Mason is infected with the spores that are changing mankind into something else. Cured of the spores, Mason finds himself in even more demand as a team leader, since he now has an almost telepathic ability to speak with the human war machines and, to some degree, with the aliens. 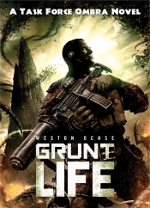 It turns out we have not been invaded, so much as chosen for a supply depot by the alien creatures. They are fighting a war of their own and need the resources of our planet to make their own weapons. We aren’t even worth communicating with, just shoved aside and swept into the refuse pile, much as an ant’s nest is destroyed by a gardener.

As an avid reader of military SF for many decades, I must say this is one of the better versions of this type of alien invasion stories I have read. It stands up with Heinlein’s “Starship Troopers,” David Weber’s “In Fury Born” or even the Golden Age’s Jack Williamson’ “Three For The Legion.” Ochse has managed to delve into the heart of what makes a soldier a solder, and define why a soldier continues to fight after seeing death and destruction on a daily basis. His choices of chapter headings are a mixture of philosophy, psychology and humor and well chosen for all that.

You can read an excerpt from Grunt Traitor right here on Amazing Stories, and you can read a guest post by the author here.

No. 18 – 2013Jun02 – C.J. Cherryh, The Faded Sun, and a World Building Ethos. The next time you look into the night sky, try finding the asteroid, 77185 Cherryh. Admittedly, it’s not an easy task. But it’s up there and named after Carolyn Janice Cherry, aka C.J. Cherryh. The discoverers believed Cherryh had “… […]

Hispacon 2021 will be virtual, details for the IV Science Fiction Novel Prize “City of Knowledge” announced,