Loyal to the classic franchise, Doctor Who 10th Doctor Vol 2 – The Weeping Angels of Mons is a cohesive story that flows smoothly from pane to pane.

It’s been over half a century and includes a dozen Doctor’s, but the comic world finally gets its proper representation of what Doctor Who is really about. Oh sure there have been other appearances of the famed time lord in the pages of funny books, but until recently, most of them have been mere caricatures of the real fellow.

Titan Comics has undertaken the daunting task of bringing the Doctors #9, #10, #11, and the current #12 to graphic print while remaining loyal to the individuality of the character. By encapsulating the various portrayals (Christopher Eccleston as the 9th Doctor, David Tennant as the 10th Doctor, Matt Smith as the 11th Doctor, and Peter Capaldi currently in the role of the 12th Doctor), the comics bring the separable auras stemming from the differing regenerations, yet remaining loyal to the mysterious brainchild of Canadian television and film producer Sydney Newman. 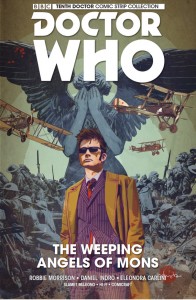 The volume that currently stands out is the Doctor Who 10th Doctor Vol 2 edition published in electronic format last month with print copies scheduled for September release. Titled The Weeping Angels of Mon, the subject is self-explanatory if you follow the series. Second only to The Girl in the Fireplace episode, the episode titled Blink is one of my favorite episodes. David Tennant plays the role of the Doctor in both of these instalments, probably an influential reason for him being my favorite Doctor as well.

Weeping Angels is a race of monstrous stone statues who send their prey back in time with a single touch, and in turn they feed off of the “potential” energy from the time that the victims “would have” lived in the present time. Though the victims travel back in time unharmed, they are left living out the rest of their lives in the past.

The only defense against the angels is to not blink. The statuesque figures are locked in tame and cannot move while they are being watched. But in a mere blink of the eye, they can advance in an instant. This is why we sometimes see groups of angels shading their eyes. If two Weeping Angels happen to look upon each other with their stone eyes, they will forever be locked in time. Not as bloody as some of the other screen monsters we’ve experienced, but just as frightening all the same.

The Weeping Angels of Mons takes place early in World War I. And in perfect Doctor Who fashion, the wonders of science fiction are melded comfortably with the real world, giving readers the essence of believability and the often sought “what if” sensation. And since the Weeping Angels deal in time paradox horrors, the setting could not be more perfect. 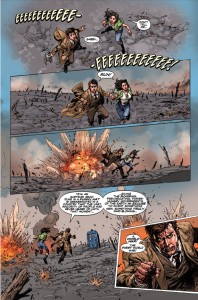 Mixed with the typical whimsical attitude of The Doctor, the tension is often softened and given way to the social examination of the human condition, in such a way, only The Doctor could get away with.

“1914: An Austrian archduke in a FUNNY HAT is assassinated in a country that the vast majority of people had never heard of until that moment…

Giving the bickering, prevaricating, power-hungry governments of the Earth an EXCUSE to invent something new, something TRULY mind-blowing…

This sarcastic observation of one of humanities most dangerous weakness in describing such a pivotal yet little noted moment in world history is what makes the Doctor Who concept so brilliant. It’s not just a fun ride. It’s also a lesson in our social inadequacies. Then again, just as eloquently, he brings the reader back to reality when he follows with, “Who’d have thought people cared so much about funny hats?” 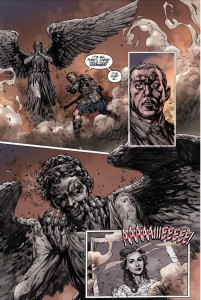 The Weeping Angels of Mons is written by Robbie Morrison with artwork from Daniel Indro and Eleonora Carlini and colors by Slamet Mujiono. Remaining loyal to the classic franchise, it is a cohesive story that flows smoothly from pane to pane. Fans of the television program will appreciate the accuracy in both the prose and the artwork from this Titan Comics production because the illustrated characters are true to their televised counterparts. And for those not familiar with the original appearances of the Weeping Angels or the acting talent of David Tennant, you will be pleasantly surprised if and when you get a chance to watch the those episode because they are well represented here.

With so many Doctors hitting the comic shelves these days and their many volumes being compiled, it can be overwhelming to dive right in for the first time. Though any of these are sure to please the Tardis fans, Doctor Who 10th Doctor Vol 2 – The Weeping Angels of Mons is a fantastic place to start.

5 of the “Best” Video Game Movies