I was a book dealer for many years. Because I love the genre I always seemed to specialize in sf. So, when a doctor’s wife says, “Johnny loved (some kid’s fantasy), but it’s way too basic for him. Can you recommend something else?” 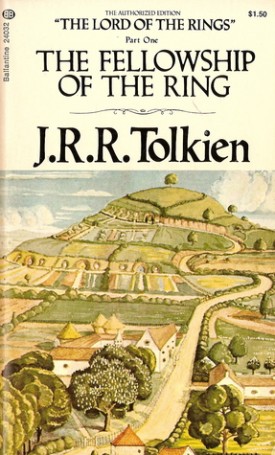 At the time the obvious answer was The Hobbit which the kid just inhaled. And so I sold them The Fellowship of the Ring next.

Somewhere back in the mists of time (in the 60s) The Los Angeles Times had an article about Tolkien and how the hippies loved the trilogy and it was an Ace paperback. The paperbacks were duly acquired by my family (we weren’t hippies, but sf readers) and I think everyone in my family read them. Me? I read them then and EVERY SUMMER, from when they first arrived in the house until I went away to college.

The doctor’s kid? Well, he was going swimmingly along and then he and his mom came back to the store, because he said, “It had gotten really borrring!”

When I was a kid, I had learned there was this really just terrible piece in the first book, Chapter 1 in Book 2, in the first volume. I’ll save you looking it up, or even trying to parse that (although it should be accurate). It’s the Council of Elrond.

And, of course, that’s where this 12 year old kid had gotten. I told him, “Just skip it!” and he came back in in a week or so, ready for The Two Towers. For years I told people younger than 16 or who just loved action/adventure stories to skip that chapter. For years I skipped it when I did my summer reading.

When the first movie was going to come out, my local NPR station had a Tolkien scholar on their talk show. I called in and said that I’d always skipped that chapter.

The scholar replied, “But that’s the best part!”

And although I didn’t say it, what I thought was, “It doesn’t have hardly anything to do with the story of the guy getting that ring up the mountain! It’s the underlying history and politics.” The chapter is an interesting piece, if you like complexity and backstory.

The action-adventure of the small people being chased all over and doing something near impossible can be read perfectly well without it.

And that is my point. My point?

My point is really simple. Action-adventure stories, good “old-fashioned” sf doesn’t have to be written like Buck Rogers to be good. Literary fiction doesn’t have to be read like poetry if it has a good story in it. A well-written piece that isn’t obscure can be read by the twelve year-old for what they can get out of it. The same piece can be read by an adult who will get an entirely different take from the same books.

That’s the way it’s supposed to be, isn’t it? Twelve year-olds can read Tolkien, with a minor adjustment, and a great deal else. They will usually skip what they don’t understand. Folks who like “old fashioned” sf can read literary type sf and enjoy it, if it isn’t too pretentious or obscure.

Well written books will stand on their own merits.