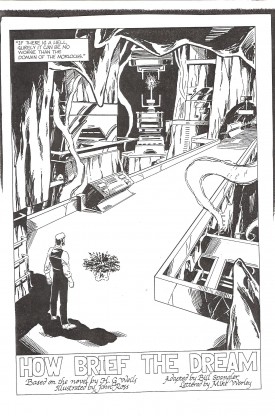 THE TIME MACHINE As a Trade Paperback Collection

LOS ANGELES,CA – H.G. Wells? Time Traveler goes back to the future in a graphic noveladaptation of The Time Machine, publishedby Pulp 2.0 Press.

Wells’ classic story of the distant future and a humanitysplit into two distinct races has been inspiring different interpretationssince it was first published in 1895. Two of the best known are the 1960 film,directed by George Pal, and the2002 film, directed by Wells great-grandson Simon.  This comic book adaptation, scripted by BillSpangler and drawn by John Ross, and collected from the original EternityComics mini-series from 25 years ago, keeps to the tone and spirit of theoriginal Wells work.  It also expands onsome of the implications of the story by showing what one of the earliestgenerations of Morlocks  may have lookedlike.

“I have been a fan of TheTime Machine since I was a young boy, and have read or seen almost everyiteration of it,” said Pulp 2.0 MPB, Bill Cunningham. “When I was able to read Bill Spangler and John Ross’s version of it – how they adapted the material,and brought something new to the original Wells vision, then I knew I had to republish it for our audience.”

“I actually encountered  The Time Machine in comic book form,before I read the prose version” Spangler said. “It was the adaptation of the George Pal movie.  I was seven, maybe eight years old and itwas, without exaggeration,  mind-blowing.I thought the scope and scale of the story was amazing. As I grew older I cameto appreciate the political message.”

Spangler’s other comic book work includes several original limited series based on the classic anime series Robotech. In addition, he has written original comic book stories based on TV series such as Alien Nation;Quantum Leap and Tom Corbett,  Space Cadet. Spangler and Ross’ collaboration was originally published by Eternity Comics in 1990,but has been out of circulation for nearly 25 years.  The Pulp 2.0 edition includes abehind-the-scenes article by Spangler,  atribute to Rod Taylor, the star of the George Pal movie, and an interview withTom Mason, the editor of the original comic mini-series.

The Time Machine is available from Amazon and Createspace and will besold around the world. For more information please visit:

Pulp 2.0 Press, headquartered in Los Angeles, CA was formed torepublish classic pulp and paperback series which had fallen out of print. The company’s mandate is to place affordable pulp entertainment into eager fans’ hands using the latest internet technology. This includes print, ebooks, video,audio, merchandise and games. To us, “pulp” is not a particular genre, format,medium nor literary time frame – Pulp is an attitude. The company has thus far published: Monster Island by Graham Nolan,  The Agent 13 Trilogy by Flint Dille & David Marconi, The Twilight Avenger by John Wooley& Terry Tidwell,  and The Big Bang Comics Collection by Gary Carlson & Chris Ecker.