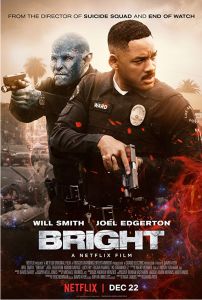 In response to some of the harsh, and in many instances accredited criticism, there are a few bright moments in the Science Fiction Fantasy movie Bright released from Netflix in December of 2017.

The premise of the film sounded intriguing enough. Set in a not-to-distant alternate future where fantasy creatures do exist and live amongst humans, the obvious conflicts between the magical world and the real world that we are all used are evident. Many of these issues are addressed, either through dramatic backstory discussed by the large cast of characters or through visual gags that most often provides the story’s humor.

Given the wide range of opportunities of meshing real with fantasy, it was surprising to discover that the story centers more around the harshness of racial divide (or in this case, species divide) and humanity’s ineptitude to solve it. LAPD officer Daryl Ward is the first human to be partnered with an Orc officer, Nick Jacoby. So, when Ward is shot by an Orc who in turn escapes from Jacoby, obvious tension and doubts of trust arises between the two officers as well as the rest of the police department. The fantasy element may sound complex as it involves a band of terrorizing elves who are bent on obtaining a stolen magic-wand that will help bring back “The Dark Lord,” a waif little elf named Tikka (played by Lucy Fry) who stole the wand and turns to Ward and Jacoby for help, and a bizarre team of government suits representing a magic task force lead by a determined elf named Kandomere (played by Édgar Ramírez), but all of these heavy hitters still become the backdrop to the looming cultural tension of differing species. 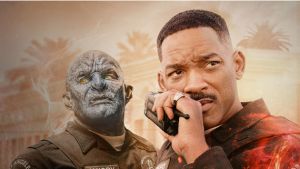 Ward is played by Will Smith (Suicide Squad, I, Robot, Independence Day) and Jacoby is played by Joel Edgerton (The Thing, Star Wars: Revenge of the Sith). Smith is at home in these types of roles, combining a serious persona with just enough light-hearted humor to ease some of the tension. Edgerton is unrecognizable in the Orc make-up, nothing like his appearance as Luke Skywalker’s departed Uncle Owen Lars. As police officers uncomfortably partnered, the duo can be easily compared to the James Caan and Mandy Patinkin matchup in the 1988 cult classic film Alien Nation.

Directed by David Ayer (Suicide Squad) and written by Max Landis (Victor Frankenstein), the film hit the right chord with many viewers even if some critics did not agree because Bright 2 is already in early discussions with Ayer as likely writer and director. There probably isn’t enough substance to carry a long series run, but the first installment of Bright was entertaining enough to draw a good number of fans for another go-around.