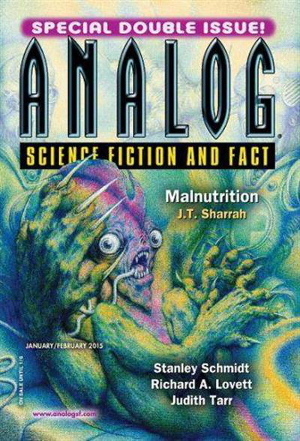 Bruce Boston’s poem “The Secret of Cold Fusion” is twenty-six lines of gently letting the reader down in regards to cold fusion. It shows very little, if any, hope for the concept and masterfully brings the reader through the “crabbed alleys of an incandescent future” and mentions the unreliable “verifications” that have happened in the real world in regards to cold fusion. This is my first experience with a hard SF poem, and the seven stanzas of “The Secret of Cold Fusion” are proof that Bruce Boston is a living Grand Master of science fiction poetry.

“Long Way Gone” is a far-future tale by David L. Clements. It is set in an unspecified future where human beings create digital copies of themselves in order to study distant worlds while also retaining the ability to upload their consciousness into computers. The story centers on Mark, a botanist who was copied from a scientist on Earth. He spends the first half of the story mourning his former flame Anne, who had left his human form back on Earth, and the second coming to grips with the idea that he may not be a copy after all. Clements gives a unique take on the old concept of choosing your own destiny and non-conformity that would make Ralph Waldo Emerson proud.

The novella of the issue is Robert A Lovett’s “Defender of Worms.” The latest in a series of Analog stories featuring an artificial intelligence implant named Brittney that began with the July 2007 issue, this long story has the implant and her latest host, a girl named Memphis, on the run from the Others, an AI hive mind. The Others consider humanity to be “worms” and the concept of life indecipherable and want Brittney to join with them. Along the way they come across Deidre, an AI composed of fragments left behind from the Others, and Floyd, from previous Brittney outings. In the end they trump the hive mind’s hand, and the story ends on a high note on Neptune.

“Unmother” by Lex Wilson is a unique tale of microscopic aliens living in the human body. Led by a Mother who protects and directs a host of sister drones, the unnamed “unmother” has been constantly rejected due to a defect she was afflicted with as a hatchling. Because of this she has the capability of free will and thought, while her sisters are mindless and obedient. Wilson handles the subject of rejection much in the same way that David L. Clements did with conformity in “Long Way Gone” and adds new life to a timeless idea.

“The Reference Library” editorial by Don Sakers succeeded in opening my mind not only to authors I had never heard of before, but also to new concepts in science fiction that I never thought possible. New releases by Greg Egan, SFWA President Stephen Gould, and T. Jackson King are talked about, among others. The common theme of mathematical science fiction, some of the hardest science fiction of all, makes the five books mentioned and the others in their series worth looking into, especially if you are new to hard SF as I am and you want to learn what hard is all about.

The final piece I want to mention is the “Guest Editorial” by Rajnar Vajra. In a nutshell, Vajra’s essay reminds us that despite the abundance of analytical tools and scientific expertise that there is so much we humans have yet to learn about our bodies, particularly when it comes to health. He gives as one of the main reasons of this as being that different cultures have differing views on health and different variations. While scientists from all over the world have come together in their simplest beliefs, such as essential fats being essential and that eating more fruits will make you healthier, there is still much debate in many other areas. Vajra spends the remainder of the article explaining why there we don’t know more about human health than we already do and how we could get the ball moving in regards to research despite the major obstacles lying in the way. This being the very first entry in the big double issue, it sets the tone for the biology-heavy stories that follow it.

(Author’s Note: Again, I am still learning and trying to nail down a good review process that I can use in the future, but it is still a work in progress. I welcome any tips, advice, suggestions, or criticism from my readers on how I can make these reviews better. These magazines are a major part of the science fiction genre, and without them the future of SF will be very small and very limited. My goal is to reach out to as many readers as I can and get them interested in these magazines, including our Amazing Stories. If you can help, too, by pointing people to these reviews and others, you will be helping to secure a positive future for our genre and our magazines for years to come.)