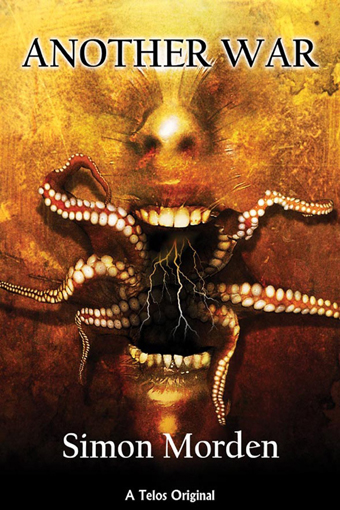 Another War is an early novella, published in the UK by Telos Publishing in 2005, by the British writer Simon Morden, who has since come to prominence with the Philip K. Dick Award-winning Metrozone series, Equations of Life, Theories of Flight, Degrees of Freedom (all Orbit, 2011). A further book in the series, The Curve of the Earth, was published last year. (The Metrozone books as published as the Samuil Petrovitch novels in the US.)

The cover of Another War suggests some sort of Lovecraftian horror, while the blurb seems to indicate a novel in the vein of William Hope Hodgson’s The House on the Borderland:

‘It starts with a mystery: an old manor house is surrounded by an impenetrable bubble, and all that lives within it seems to wither and die.

Investigating, the Army find two men inside the house: men who vanished some 100 years ago but who have now reappeared, and as young as the day they disappeared.

There are rumours of a machine which could puncture the dimensions, allowing man to travel beyond the bounds of the Earth … and for other things to travel here.’

And there are echoes of Lovecraft and Hodgson in this tale of Henbury Hall, which vanished from the Oxfordshire countryside one August morning in 1919. Now it has returned as mysteriously as it vanished, and in doing so brought an American airliner down with it. Major Thacker is assigned to investigate, along with an agent from MI5, Dickson. Thacker breaches the force field which surrounds the house, discovers Robert Henbury and George Adams un-aged but half-crazed with fear, and soon finds himself leading the army against octopus-like invaders whose very touch means instant death. There is a greater threat yet to be faced, the resolution of which will require an eerie journey to another dimension, and a final apocalyptic battle in the small English town of Banbury.

Another War moves at breakneck pace and delivers a mix of tension and action thoroughly familiar to anyone familiar with the first three Alien films. Dickson essentially plays the role of the obligatory traitor from the Alien movies, the character prepared to sacrifice those around him to secure otherworldly technology. The reader might well also be reminded of various Quatermass stories, as ancient alien forces bring psychic mayhem to British streets, and some may be reminded of Kim Newman’s novel Jago. Given that publishers Telos are so associated with Doctor Who related books, Another War could almost be seen as a UNIT adventure.

Characterisation is basic, especially with Henbury and Adams make unlikely rapid adaptations to the year 1999. But that is beside the point. Another War is a compulsively readable thrill-ride which slips by in a couple of hours, its influences clear for all to see, but adding to the fun for fans of ghastly adventure horror. The real drawback is a plot which leaves too many questions unanswered, from what followed when five miles of English countryside vanished in 1919, to a whole raft of puzzles regarding the origin of the dimension-puncturing machine and the reason behind the fate of Jack Henbury. There is a better novel twice the length waiting to get out, one which answers its questions and makes better use of the creepy Henbury Hall and the only briefly glimpsed alien world beyond. A breathless blast of a read, with the promise of something much more detailed and substantial lurking within the covers. Happily Morden’s later, full-length novels have more than demonstrated that he could deliver on the promise of this fun but minor early work.

This is a revised version of a review which originally appeared in Vector #244, November/December 2005