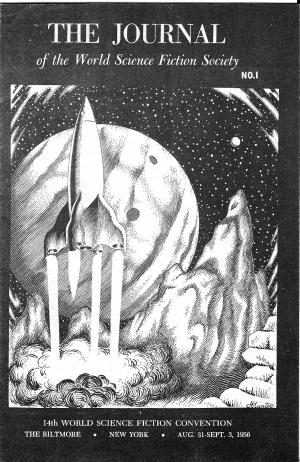 Do you collect Worldcon Program Books? I do, which is very odd, because I’ve never been to a Worldcon. However, I AM the BCSFA/WCSFA Archivist, and people keep giving their souvenir programs, so I get to read about all the fun I never had.

The oldest file on hand covers the 14th Worldcon in New York in 1956. This was not donated. It was for sale at Vancouver’s Comic Shop about twenty years ago and I snapped it up. Cost me 15 bucks, and for that I got three out of four progress reports, the program book, and a pamphlet extolling the virtues of New York City in the autumn at the time of the convention.

The Pamphlet lists a ton of stuff, not least 30 or more plays of which I recognise the following titles: Cat on a Hot Tin Roof, Damn Yankees, Diary of Anne Frank, The Iceman Cometh, Inherit the Wind, The King and I, My Fair Lady, The Man in the Grey Flannel Suit, No Time for Sergeants, Oklahoma, The Pajama Game, Show Boat, and Will Success Spoil Rock Hunter? Man, what a choice selection! This helps set the era firmly in mind methinks.

Rather than treat this as a historical-minded post-con report, I’m going to attempt to convey some of the excitement leading up to the con by quoting from the progress reports.

The first progress report leads off with an editorial by Dave Kyle, the Chairman. He makes a very important point: “The basis for all our plans, however, is simple: let’s have fun. No matter how idealistic or pretentious some of our motives for a convention might sound, there’s no denying that the principal reason for the gathering is to have a good time. And that’s what we’re doing our best to guarantee you.”

Hear! Hear! I second this concept for any and all conventions, or fanac itself for that matter.

There follows a telegram (dated Jan 28 56) from Guest of Honor Arthur C. Clarke. It reads: “INVITATION ACCEPTED WITH GRATITUDE LETTER FOLLOWS IF I SURVIVE TOMORROWS FIRST INTRODUCTION TO CEYLONESE SHARKS”

You will be happy to know Clarke did, in fact, survive. He first visited Ceylon (now Sri Lanka) in 1954, but his first actual dive – at the Akurala Reef – was in late January of 56 where upon he discovered the local sharks were not at all aggressive compared to, say, those of the Great Barrier Reef. Anyway, he snapped plenty of photos underwater and I suspect he showed some of them to attendees at the convention.

Next comes “An Appreciation” of Clarke by James Blish. He has an interesting interpretation of Clarke’s writing style: “Clarke’s writing, from the very beginning, has been episodic, fact-centered, rambling, seemingly discursive. His work is never well-wrought – that is, tightly plotted… belongs to that group of writers, rare in science fiction, which is as much interested in the road to the solution as he is in the solution itself, and succeeds in communicating that interest… Clarke has no need to be afraid of [coincidences] because his apparently artless journalistic plots open the way for them…”

Is this praising with faint damnation? Seems to be praise of some sort. Makes me want to reread Clarke. 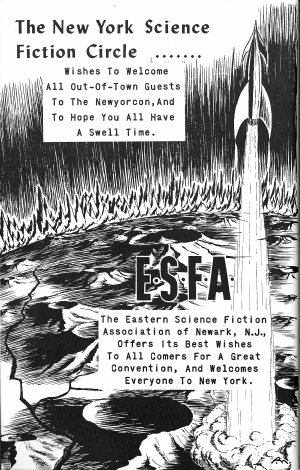 Readers are informed the Biltmore Hotel “contains 800 guest rooms, all of which are air-conditioned – the only hotel of its kind in New York!” and that “the entire 19th floor has been reserved exclusively as meeting space for the four-day gathering” (Aug 31 to Sept 3). “On that floor is the Spacious Grand Ballroom with an encircling balcony, surrounded on three sides by large French windows overlooking the Manhattan Skyline.”

A balcony famous in fannish lore. Fans who hadn’t bought a banquet ticket (hideously expensive at $7.10) and were not permitted in the ballroom during the banquet while Al Capp, the comics artist (Lil’ Abner) was speaking, fans including Canada’s Boyd Raeburn (faned of ‘A BAS’), as well as prominent US fans like Bob Tucker, Dick Eney and Ted White, flooded up a stairwell and crowded into the balcony two hundred strong. They became somewhat unruly when volunteer gopher Sheldon B. Deretchin came up and shouted “Dave Kyle says you can’t sit here.” Eventually everyone was ushered off the balcony by house detectives, presumably at Kyle’s bidding. This was motivation enough to reappear on the balcony during the convention business session and heckle the convention committee, an action which earned them the moniker “Balcony Insurgents.” Kyle’s alleged words became a catchphrase. Years later it was revealed the Fire Marshall had insisted the balcony be cleared.

Of further note, the air conditioning broke down repeatedly, as did the hotel heating. The Biltmore not quite as uniquely luxurious as promised.

Why select the Biltmore in the first place? The hotel “waived the financial guarantee, agreed to every one of our requests, and offered us excellent convention rates for rooms.” Which were:

Then comes word of three contests: 1st) name the convention. 2nd) Sketch a design for a lapel pin for the World Science Fiction Society (outfit hosting and sponsoring Worldcon), and 3rd) nominate people for the Annual Science Fiction Achievement Awards (not generally referred to as the Hugos till 1957).

Alas, the second progress report is missing from the package. 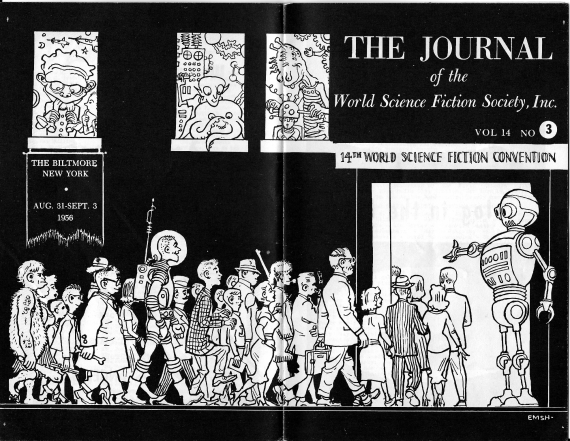 The third is still promoting the air-conditioning. It lays out some of the special requests the hotel agreed to such as: “No charge will be made on your function rooms…An à la carte bar will be set up at no extra charge… A hospitality room will be furnished at no charge to accommodate 200 hundred persons… a complimentary convention suite will be set aside for the convention committee… there will be a complimentary suite set aside for the Guest of Honor… A meeting room will be provided once a month until the starting date of the convention at no charge…”

As the person who negotiated the Hotel Contract for VCON 25 I cannot but gape in astonishment beneath a veil of tears. This wasn’t a SF convention, it was a FANTASY convention where the Hotel granted impossible wishes…

On the business side of things the certificate of Incorporation of World Science Fiction Society Inc. is printed in full, granted by the State of New York in February of 1956. By way of explanation it is stated: “Conventions have grown to the point where committees have become personally liable for thousands of dollars… By incorporation, each and every member’s liability is limited to the two dollars dues paid – so now, for the first time, everybody is adequately protected, be he committeeman or member.” 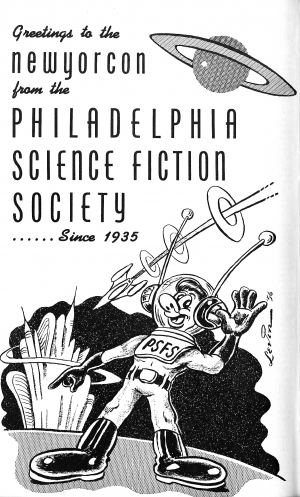 I suspect the liability per member has increased somewhat since then. And was this the last time a Worldcon membership cost $2.00? Too much for British fans, so to woo them they are being offered a special rate of seven shillings sixpence which equals approximately $1.00. That’s much better!

Actually, it’s no wonder British fans wanted to save where they could. The Concom had convinced “Pan-American World Airways to tentatively offer a luxurious DC-6, carrying 75 persons, at a special charter rate which amounts to less than $115 per person one-way!”

Think about that. $115 in 1956 dollars. That’s a HUGE amount of money. The early days of Trans-Atlantic flight weren’t cheap. Oh, and no return flight as such, but a variety of seats available on assorted aircraft varying from $190 to $290 for the return ticket home. Remember this the next time you complain about the cost of getting to a convention.

There’s an announcement the Carolina SF Society is bringing CARSIAC (Cole’s Amazing Reasoning and Sensory Codifier Including Abstruse Cerebrations), which is described as “a creation of George L. Cole, the commercial artist, fandom’s answer to UNIVAC.” As Bob Madle, the Director of the CSFS states: “The possibilities of Carsiac are unlimited —with a good script.” One wonders.

Attendees are promised: “A real attempt this year will be made to follow a time schedule, so that you will know just what part of the program should be on at a given time. The customary hit-and-miss method will be streamlined…” Such wild promises!

Nominations having been gathered, an Achievement Awards Ballot is included. Just to give you an idea, the nominees for “Most Promising Author” were Harlan Ellison, Frank Herbert, Robert Silverberg, and Henry Still. Who be Henry Still? He’s not listed in my hardcopy version of The Encyclopedia of Science Fiction. I guess he turned out to be less promising than the other three. 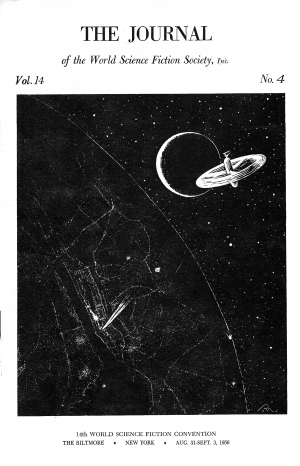 We come to the fourth progress report. The winning entry for the “Name the Convention” contest is announced: “We feel NEWYORCON is everything it should be and that it represents a new and different entity not to be confused with the first Worldcon held seventeen years ago.” Which was called NYCON. As fate would have it, nobody refers to Worldcon 14 by its award-winning title. It is simply NYCON II.

Feminists rejoice! Consider the following announcement in reference to attendees: “We have dug around and come up with the rather startling fact that nearly 30% of us are females! We told you we had figures for you… We’ve got to add that at least 40% of the girls are married – and bringing their husbands. Still, that leaves us quite a few.”

Plus this exciting news: “Everybody likes a beauty queen and we may have one, too. A certain glamorous young lady who is in the entertainment world says she ‘simply adores’ science fiction. She wants to come. If she does come, she’s certain to be a favorite target for the lensmen.” No idea who this was or if she showed up. E.E. Doc Smith fans note the weak pun.

And then there’s word: “We’re going to have another science fiction ballet.” Not a serious one, like the previous “Asteroids” performed at Chicon, but a comedy starring “Captain Hero” lasting about twenty minutes and appropriately titled “Cliché”. It features a cast of characters like “Crowd” and “Son of Crowd.” Ruth Ramsey and Olga Ley are the ones to blame. 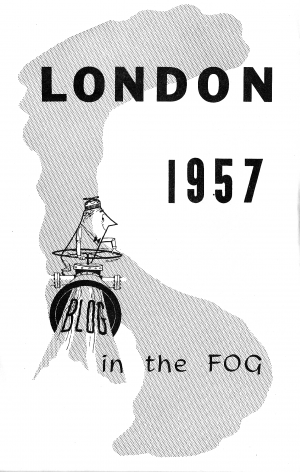 Even worse, the Philidelphia SF Society will show a color fan film titled “’Longer Than You Think.’ See what happens when Joe the Mutant is chased into the forest by the police. Will the Chief of the Mutants accept Joe as one of his group? Can true love come to Joe the homeless mutant? Are the girls April, May and June really as cold as December?” They don’t write stuff like this anymore, thank Ghu.

For tech fans, the Glenn R. Martin Company will present a display about the Vanguard Satellite, including (possibly) “a forty foot model of the projectile which will carry the satellite” about a foot off the ground as you may recall. As the satellite rolled across the tarmac during the explosion, merrily beeping away, one scientist in the blockhouse was heard to mutter “Somebody kill it.” I doubt Martin representatives spoke of THAT possibility at the con.

Also to be present, a display by the US Airforce. Turns out, as Harry Warner Jr. later reported, it included “three spacesuit-clad manikins in a space station exhibit.” Somebody swiped them. The Air Force called in the FBI and presented a bill for $450. “Excitement over the feds was so intense that the snitching of cover art by Kelly Freas and Rich Kirs, lent by publishers for display purposes, didn’t receive proper notoriety.”

This article barely touches on everything planned and what took place. Despite the hotel freebies, the convention lost $1,300, a new Worldcon record. But the important thing is, great fun was had by all. 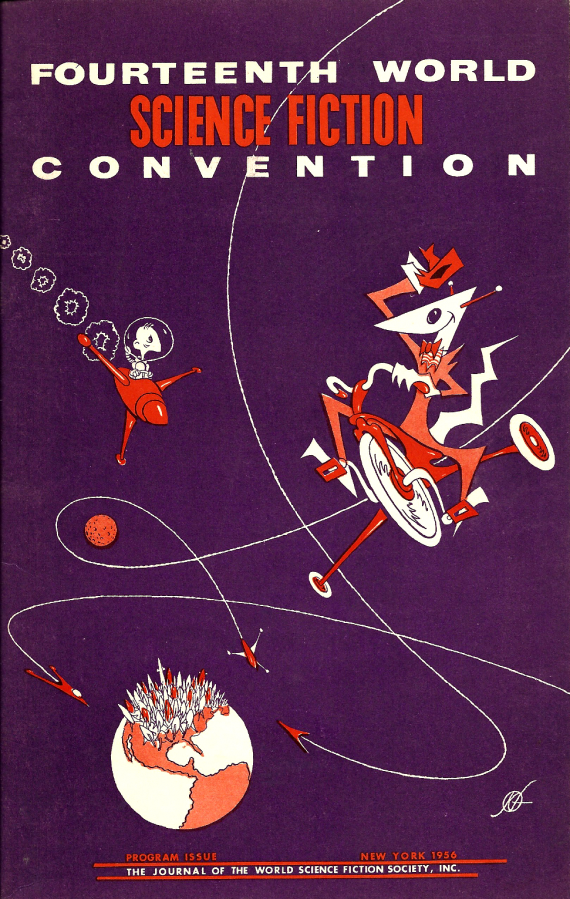